Take a picture of the room as you like, and keep a cute puppy in your own room!!

Screenshot My Dog My Room Free 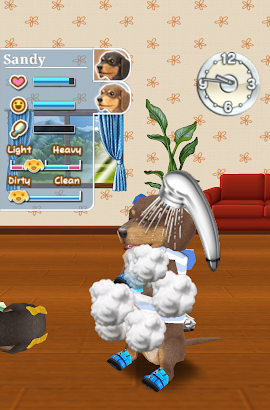 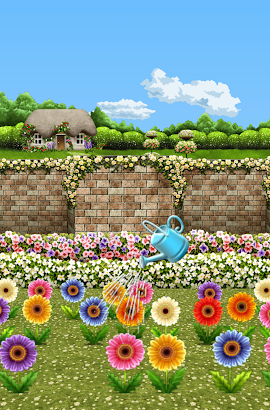 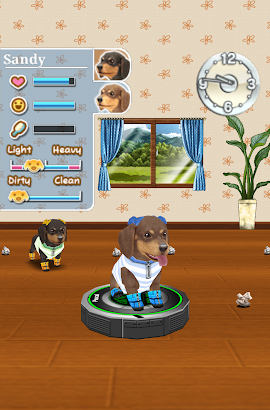 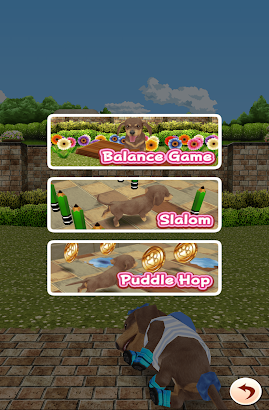 Take a picture of the living room, the park, and the bedroom as you like, and keep a cute puppy in your own room!!

* Play with your puppy!
Tap the screen and your puppy will come to you. Use your finger to pet
your puppy and make him or her happy and more active.
If you take good care of puppy, you get a lot of coins.
Body shape changes depending on the way to taking care of puppy.

* Various way to enjoy
You can feed and play ball with your puppy anywhere and anytime.
Not only you can change the room to 3D but can enjoy dressing up your puppy.

* Let’s have two puppies in your room!
By level up, you can adopt a puppy and kitten each.

If you upgrade your app, the following features will be added:
・You can select all coat colors of Dachshund.
・You can adopt a puppy and kitten each.
・3 types of Picture Room will be added.
・You can get 1500 game coins.
・Ads will disappear.

Looms, Laughs, and Crafts March 19, 2017
Stupid When you name a dog the name can only be six letters long, and you can’t even play with the dog. I advise that you don’t download this app not only is it stupid the app is also big.

Allie Smith February 28, 2017
I think it needs more places, and that the dog care did not cost.also the dog stats go down easily and I wish u could play with the dog more and take it on walks abd I wish u could train the dogs

Nay Joures April 17, 2016
Guys you should get this game it is fun but it kicks you off a lot so it is your choice the animals are so cute.. I like the game I rate three stars guys please fix it. Otherwise great game!???????

Makenna Wise August 11, 2016
I loved it but it would be better if you could have more than 2 puppies at a time and more friends to find. Other than that I would recommend this game to others! ?

amarie Morales February 13, 2016
Trying to play the game…? Well,it’s not going to work….i tap on the game icon and everything turns black.DO NOT download this game

Mikhayla Miller April 24, 2016
Its so fun but have a better way to show how to play other than that i think it is great

Kamila Glitter July 6, 2016
Love it but it need some workon some part of the game , like the shower like hello yourgiving it a shower in the living roomotherwiseit is awesome

Nicole Harlow December 25, 2015
My sister has this game (I dont) but it is super fun

Meenakshi Hariharan January 13, 2016
some times it is stopped,while playing. Fix this issue.

Kiara Wright October 16, 2016
But? Level You Allowed To Breed Your Animals On?

Griffin Morris April 8, 2016
This game is the best .my cousin argrees

Maggie Atwell July 16, 2016
I’m never getting any more games from the company don’t get the game

joel hammock October 16, 2016
You get to do everything on the game but I mean make more levels

Artayshia Melton July 26, 2016
Everybody should play this game

Lps SparkleTV September 16, 2015
The dogs are cute ? and I can’t stop playing this. Add more dogs so it will be the best pet game ever!

UnknownJune 20, 2015
Best pet game EVER!! I have a dog and I still play it.But it’s a littlebossy please fix that and I will be the happy

Jeannie Robinson September 21, 2015
OMG this app kep saying this app is not respoding would you like to close it fix the game

Kayleigh xx November 20, 2015
It’s really cute and everything but wats with the ads and I think u shud be able to take ur dogs on a walk

amanda lynn July 1, 2015
Paid for the game and now every time I try to play it won’t open and says it has stopped working÷

Gloria Melchor October 3, 2015
It is so cute and It fun you can also play with your puppy or cat