Best bubble game by far I love the fact you don’t have all this EXTRA stuff like pop us, have your friends send you lives, pay for extra this and that… It’s 100% free guarantee!? You don’t have to deal with your friends sendyou extra lives, and let’s face, when a new game comes out with or on Facebook it’s all the rage until something new comes along and now your stuck on level 82 waiting 24 to 48 hours for someone to send you and extra life NOT WITH THIS GAME!!! TRUST ME YOULL LOVE IT ??? 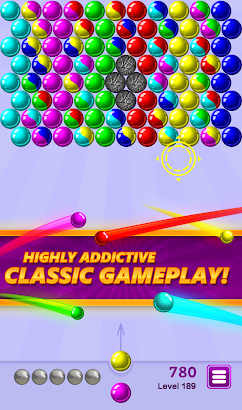 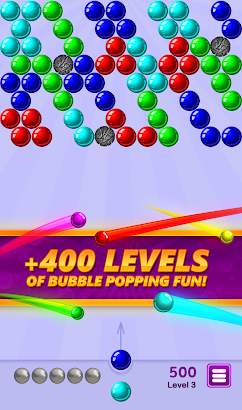 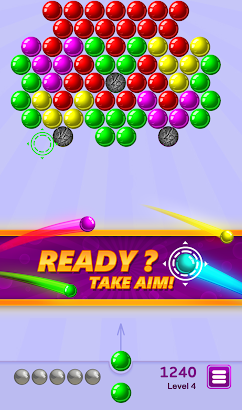 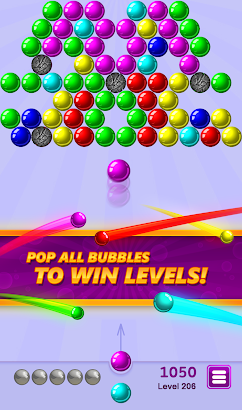 With Bubble Shooter Arcade you will get the chance to relieve some of your awesome childhood memories and receive the ultimate arcade experience straight on your mobile, so you can play anywhere and whenever you want.
We have developed this awesome bubble breaker aimed to all of you who love solving fun puzzles and beating challenges. Journey down the memory lane back to the colorful 80’s and shoot and pop bubbles in a super cool retro themed game. It’s the top classic and addictive smash hit on Google Play.

* The Arcade Mode gives you the classic game experience in over 800 smashing levels. Match 3
bubbles or more of the same color to pop and reach high scores with less shots!

UnknownNovember 6, 2016
I love the fact you don’t have all this EXTRA stuff like pop us, have your friends send you lives, pay for extra this and that… It’s 100% free guarantee!? You don’t have to deal with your friends sendyou extra lives, and let’s face, when a new game comes out with or on Facebook it’s all the rage until something new comes along and now your stuck on level 82 waiting 24 to 48 hours for someone to send you and extra life NOT WITH THIS GAME!!! TRUST ME YOULL LOVE IT ???

Cassie Calhoun August 7, 2017
Simple IS Sweet!No storyline, no large ads that make it hard to aim (there are ads, but also an option for ad free!)My slow phone will load this game time and time again.Love it!

John Elliott October 25, 2016
A great game keeps you sharp makes you think what would be the best way too take the next shot. Not a good game for some one who is color blind.

Savage Gardener October 12, 2017
You get to differentlevels then it closes down and you have to start all over again. I was up to level 61 then back to start. This is the second time it has happened.

Cindy Edmonds January 3, 2017
700 plus configurations to dismantle. I liked it because it was relaxing and still engaging…I just passed every level and it kind of makes me sad because it was my kick back moment of the day…

UnknownJune 18, 2017
Graphics move too fast to be won. Often, especially when a win is close, the balls will not go where they are sent. I like the game, but wish it were more consistent.

Kenneth Nugent December 4, 2016
I’ve been at level 467 for 2 weeks and every time I get to only a handful of bubbles left, that’s when the game decides to add 6 more lines with room for 3 because of the barricades on each side.BS.

Diane Elich November 8, 2016
Buddle shooting games r so much fun . i have 3 on my phone

John McGowen October 24, 2016
You can’t always get 3 stars because often times you are given colors that you don’t need at the moment.Otherwise it’s a good game. It starts off easy, I didn’t restart a level until about 300 or so. Not difficult but a good time killer.

Mary Houle April 17, 2017
Im at level 399. Cant place bubble on appropriate space as too close to.bottom. If needed bubble is second in line i can’t bypass first bubble to play the second. Any suggestions

Kenneth Tranter November 30, 2016
Great game to pass the time although annoying when u get stuck on a level cos the wrong colours keep coming out. Need more levels now. When will there be more coming

Colin Himmelstein December 22, 2016
I’ve had this game for age, and when working correctly and loading it was great! But it won’t load now so I give it 1 star. Once it starts loadingagain I will give it 5 stars.

pam kupke December 12, 2016
I like the game but it always turns off after about five games very irritating

Judi Booher November 21, 2016
It has no way to switch out the bubble in play with next bubble, it limits game challenge

Hilary Hope December 6, 2016
Its great there are no ads to keep interupting your game, very addictive.

JR Hollingsworth October 20, 2016
It’s kind of a comfort game to me because it reminds me of my first smartphone and the first game I ever downloaded and this one comes close to that one

UnknownApril 25, 2017
Game stuck at level 15.Had to uninstall. Then reinstall to start over

Neda Coffee December 14, 2016
I like this. Around level 450, I had to uninstall the whole app and reinstall it fresh.

Iain Walker October 1, 2017
Have completed the first 650 levels on my last phone. Time to start from the beginning again!

Liz Conradie July 7, 2017
Don’t like it much. Not as exciting as other bubble games

Kristal Tidrington March 26, 2017
I have been looking everywhere for this game. I love it! My favorite.

Sheldon Lockwood November 20, 2016
Hours of fun, needs to be updated.Stops when get to level 800.

janet rutledge August 24, 2017
I love the game but you cant switch the color balls I hope you can fix that

Eileen Dockins March 17, 2017
Like it but ya can’t change bubble to make the right shots where you want

Amanda Brooks February 1, 2017
Fab game… But awaiting more levels…. Having to go back over previous games

Alak Patgiri July 14, 2017
Pls improve the grafics other wise the game is so cool and funny.and also refresing.Thank you to made a game loike this for me

Lois Vining September 30, 2017
Can’t even close the game out without getting an ad page.BS.Uninstalled!

Racheal Gosselin October 3, 2017
This game is plain and simple bubble popping. No fuss, small ads and easy to navigate.