Explore the Poptropica world, and choose the type of HERO YOU WANT TO BE!

My only problem is the island of Time Tangled ? I’m slightly disappointed because after changing the past and returning to the lab, the future is still bad. I’ve tried to restart the island and played all over again but the result is still the same: bad future. Then, I restart my phone thinking that maybe my phone is the problem but the result is just the same as the first. Please fix this error. I really enjoyed playing this game. Thank you ? 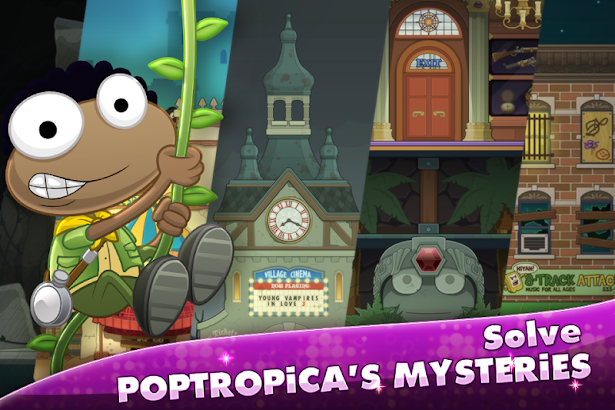 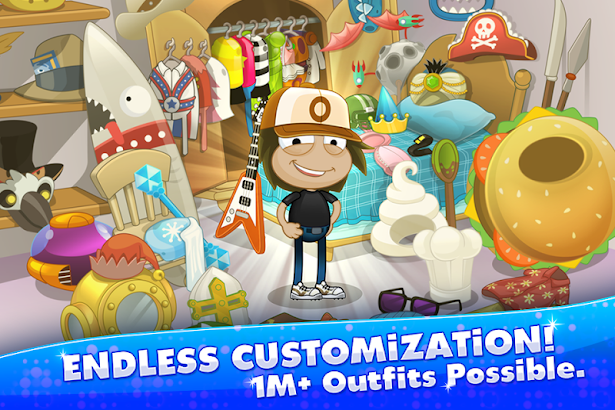 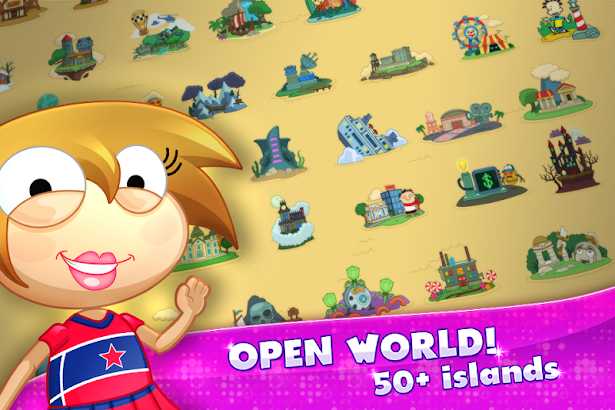 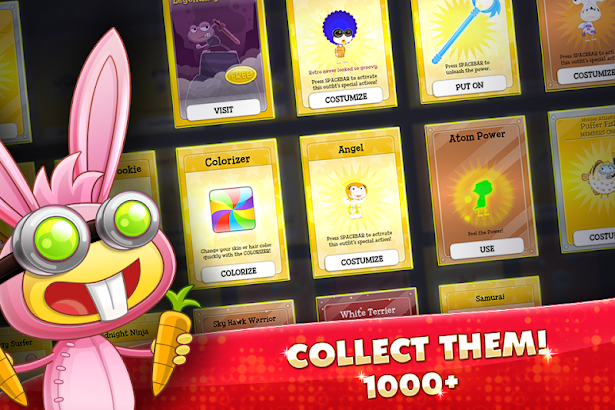 Poptropica is an open virtual world created by Jeff Kinney, author of DIARY OF A WIMPY KID. Join a community of more than 10 million players in a unique multiplayer adventure game, where you choose the type of HERO YOU WANT TO BE! Collect powers, prizes, and customize your character with exclusive outfits from your favorite heroes!

So, are you ready for your next big adventure?! Travel back in time, break out from jail, build your own Island or battle zombies, monsters, robots, pirates, Vikings, thieves, Greek gods, and the evil Dr. Hare! Solve mysteries and complete quests while exploring a virtual world composed of a growing chain of story-based islands. Begin your journey and create your very own Poptropican today!

FEATURES:
– Explore the virtual world of Poptropica and its 20 islands!
– You’re the Hero! Solve 1000+Puzzles, mysteries!
– Customize your hero from head to toe with 1000+ themed outfits!
– Collect items from your favorite heroes!
– Multiplayer game where you can meet and chat with your friends! Join a community of more than 10M players.
– Create your own island!
– Free to play, with in-app purchases available for more customization!

Poptropica made Time Magazine’s list of “50 Websites that Make the Web Great”.

*Poptropica is free to download and play. However, you can purchase costume bundle packs with real money. A WiFi connection is required to download this app.*

Trisha Mosenabre September 27, 2017
My only problem is the island of Time Tangled ? I’m slightly disappointed because after changing the past and returning to the lab, the future is still bad. I’ve tried to restart the island and played all over again but the result is still the same: bad future. Then, I restart my phone thinking that maybe my phone is the problem but the result is just the same as the first. Please fix this error. I really enjoyed playing this game. Thank you ?

Black Girl Sanspai October 11, 2017
People, people, people. Please. We can all agree that this game is AMAZING. This game is everything BUT boring! I love the art style (It’s the same when it’s on the computer, but I just think is so CUTE.) And the controls are pretty good as well. And haters, if you hate it so much I’ll help explain it to you… *ahem…* NO ONE CARES.

Lumas ward October 13, 2017
It’s freaking awesome! But It keep going through the same loop in Time Tangled Island every time when I go inside the future machine! I already checked everything! This app need an update! Please update this app!

Kristen Lambert October 10, 2017
I love the game, however there are a few glitches. The main one being on the “Time Traveled Island” I have finished everything to be finished, the scientist lady even says I need to return to the future bc it looks like I have fixed it, but Im not getting to thr future. Future me just keeos saying “Return to me when you’ve fixed everything” Like WOMAN I HAVE

kookie’s and tae October 13, 2017
It’d be nice if you could add in more islands. It gets kinda boring playing the same ones all the time. I’d rather play on pc, but good game overall

Rachel Silverberg October 22, 2017
Love the game but there is definitely room for improvement! For example, on the Arabian Nights island there is no way to launch the smoke bomb on mobile – you need to “press spacebar to launch”. Bummer. Also, the controls are a bit jerky making jumping onto small ledges very difficult and irritating. But overall, great game as long as you’re patient!

Krystal Dunagan October 19, 2017
It’s cool that you made a mobile version of this amazing game I played as a kid. But, In time tangled, I’ve saved all of the era’s and it’s saying that I still need to fix the past?? Help

UnknownSeptember 22, 2017
I am on the time tangled world and I’ve completed everything and then I tried to go to the future time machine and it just brings me to the beginning plz fix it!!! I can’t finish the that word fully

Lily Montana October 5, 2017
I would give it 5 stars, but I keep having glitches. Like, the Atlantis world. Any time I try to go into the deeper water, the screen just goes black.

None of your business October 3, 2017
Where are the 50 islands? This is false advertising until the 50 islands are added. There aren’t non-member costumes and weapons. Can you please fix all this? I will change my rating for the app after this is done.

Unicornette October 19, 2017
OMG!!! SO GOOD!!! One thing though … I hope it isn’t too inconvenient. I was talking to my sister the other day, and we were discussing how fun it’d be if Poptropica had multiplayer! I know this’ll be really hard but… Can you actually add it? The arcade is fun and all, but it’d be THE BEST GAME EVER if there were multiplayer maps! Like you could login to FaceBook or something, and invite your friends to play with you! If you’ve all downloaded the map, you can join and different people could do different things, and it’d be so fun to just bump into your friend in the map, maybe chat with them in a sandbox (chatroom). Anyway, I know it’ll be really hard to add a map where groups of people could do it, since its hard to add that for even 2 people, but I’ve been obsessed with Poptropica for a SUPER long time and I’ve always dreamed of this happening!

Andrew Bennett September 25, 2017
At what point will the Time Tangled glitch be fixed? I restored every period and I’m still warping to the bad future.

Hannah Crane October 8, 2017
I used to love playing this on my computer but now on my phone it can’t even get past the creating tracker loading screen ☹️ I have even tried uninstalling and reinstalling and nothing has worked.

Doritos September 25, 2017
I’m not really into child games but it seems quite okay for the children. Besides the people that can be inappropriate.

Samantha Marquez September 21, 2017
Overall a fun and interactive game, but it needs more islands. You could finish them all in less than a week. I really love this game but it needs as many levels as you can have on the computer.

Barry Chung October 24, 2017
I have a glitch. After finishing everything for Time Tangled Island, the lab didn’t send me to the future but it’s stuck in the scene before I did anything. Please solve this problem.

Monique Garza October 1, 2017
At first it was really fun but I been playing for awhile and everything the same I mean the arcade is the same why not put some new stuff in there and games in the arcade and more options to talk to people

Skyler Goodman October 7, 2017
Time Tangled island does not work I just did it twice, you can’t go to the future, the portal takes you two the corrupted future.

UnknownOctober 21, 2017
well I didn’t try it but I downloaded it because I have a game that is called hello pet and it will give me cookies so I downloaded ir

Gaby Almanza October 9, 2017
Haven’t played it yet but what I have played is poptropica worlds so my review is based on that????

Mushroom Creator September 24, 2017
I don’t really like this because it doesn’t show all the island like Big Nate and it is always glitching.

ultra monkey September 25, 2017
I love the game brings me back to my childhood but I REALLY REALLY WANNA PLAY SKULLDUGERY AND WILD WEST PLEASE ISLANDS PLEASE

Omaris Powell October 16, 2017
When you untangle time in time tangle the time doesn’t go back to normal for some reason and it’s annoying

UnknownSeptember 29, 2017
I hate it i tried to move but I couldn’t move and it doea not say in yhe top -help- i needed help but NOOOO

Country Gal October 18, 2017
I love it! But if you could add the zombie adventure and shark island and a few more, THAT would be awesome!

Betsy Reyes September 25, 2017
The game is great but I’m having some issues with it because every time I try to play it freezes every time

Rosepetal of Earthclan /Pokemon Princess Rosalina October 10, 2017
I think it should let you load data that you have on the computer like if you have an account on the computer it will save more than ur skin when u log on pls fix this thx

Brianda Ruelas October 2, 2017
I think it needs more islands I mean we need more cause what do we do when we finished all the islands we can’t keep replaying them

UnknownSeptember 23, 2017
It is fun and go but the only promblem is the tangle time world

fnaf fan does cringe / Maddie da bunny October 19, 2017
It’s a great game, but I wish there were more islands. If you add more islands then I will be completely happy with the game. Thank you.

Dillin Weimer October 14, 2017
There was this glitch where my clothes couldn’t change and items from other quests where in the wrong place. Could you help?

Jamie Tay October 12, 2017
it doesnt have 50 plus islands….please add more ive completed them all and i cant play the ones on the website
Tags
StoryArc Media