Untangle – best logic games. its a great logic puzzle to activate your brain.

I love the game itself, good practice for untangling network diagrams.Unfortunately, the UI has a couple really annoying problems.The connection points sometimes get stuck and you have to restart the level.Every time you start the game the music is turned on.You have to return to the main menu to turn the music back off, but the game does not mark which levels you have completed so if you didn’t pay attention before leaving the level you don’t know where you left off.Level 139 has a ball with no lines. 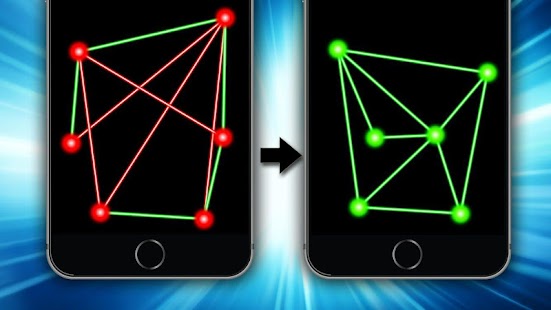 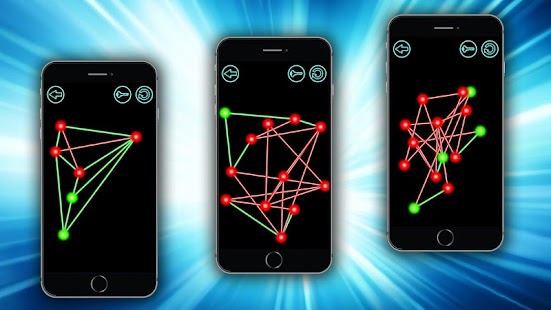 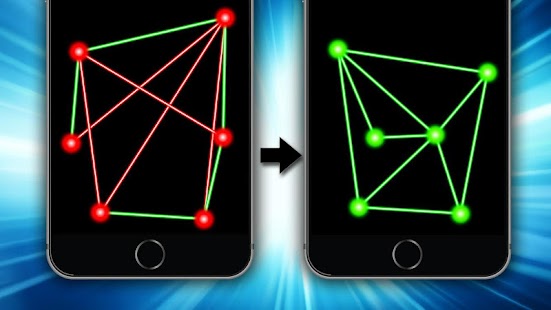 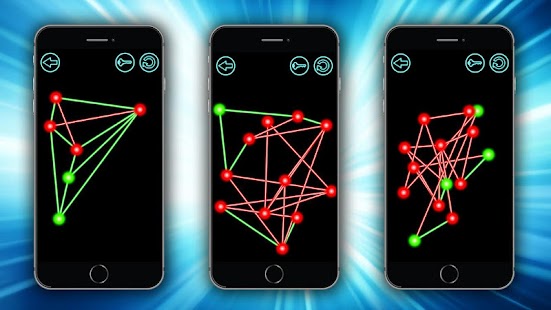 Dan Valentine November 10, 2016
I love the game itself, good practice for untangling network diagrams.Unfortunately, the UI has a couple really annoying problems.The connection points sometimes get stuck and you have to restart the level.Every time you start the game the music is turned on.You have to return to the main menu to turn the music back off, but the game does not mark which levels you have completed so if you didn’t pay attention before leaving the level you don’t know where you left off.Level 139 has a ball with no lines.

Rani R March 27, 2017
Love the game! Ads overload but easily skipable. At first didn’t feel difficulty rise then got to 100’s & definitely found they took me longer! Sad it finished. Possibly due to screen size. For keen eyes- work out over/under trick. I noticed it in level 3 then 4got about it, but came to it in level 138 lol

Dmitry Zvorikin January 21, 2017
Minus: unable to turn off the music permanently. Stick dots at the center of the table on 11x-s levels. The rest… Perfect game. I did not see the ads because of xposed xad, but I really enjoy it.

virginia herman August 5, 2017
Way to easy got done with half of the game in 20 minutes… But other then that it was injoyable. (When righting this I’m half done) I’ve only stopped playing until later because It got boring.

Allan Tong May 1, 2017
The game is somewhat addictive, but becomes monotonous. Once you get past level 90 the nodes can become unresponsive and only option is to restart again, annoying.

Gab Erns July 18, 2017
While trying, you end up solving the puzzle without using any strategy. It should’t show the solution until you are ready to check it. Also, remove the fireworks! The positive feedbak on games is getting ridiculuos. Do we really need a pat on the back every time we accomplish something?

September 10, 2017
Love the game but have to keep restarting levels because it locks up and one or more of the dots won’t move. Very frustrating especially on the higher levels when you are getting close to solving.

Holly Cannon December 14, 2016
I’m on level 113 and most of the time when I’m halfway through a puzzle, I start having problems moving some dots. The only way for me to fix it is to start over…. And lose some of the ads….. ????

Eileen Rothlisberger June 2, 2017
Love this game. Not so hard you get frustrated, not so easy you get bored!

Monique Lucio May 6, 2017
Enjoying this game. Just hate that sometimes one dot will get stuck.

R1Master September 22, 2017
Ads take up a portion of the screen, ads are between every second map, can’t turn off music permanently… But it is fun.

Michele Halliwell October 8, 2017
Love the crisp colors! Red is wrong, green is right. That the colors indicate if you’re right or wrong is a big bonus for me.

Judith Jayasinghe May 17, 2017
Nice game overall but the giant adds asking you yes or no to download random stuff between levels are a bit annoying.

October 2, 2017
What can I say that’s not been said already!!! I found this puzzle to be somewhat addictive in not wanting to put it down. Still love playing it!!!….

Margaret Huston September 21, 2017
Love this game, moving the lines so all lines turn green, (thats what we want). I enjoy the fact that you have to use your brain.

Lor Pokluda June 9, 2017
Sometimes a dot will refuse to move, abs I’ll have to reset. Uninstalled.

Igor Minevich March 16, 2017
It’s a great brainteaser that I’m actually going to use for teaching my math class! The controls and graphics are well made too.

KARTHIK M S December 24, 2016
There are certain levels where a particular dot gets stuck

ebony Davis August 2, 2017
Love it, keeps me occupied. Had to start over after a factory reset. Wish I could have saved my progress.

Jeanette Rios April 10, 2017
It’s boring; it is almost the same puzzles each level.

Jill Waller February 9, 2017
do NOT DOWNLOAD THIS SUPID GAME. IT HAS STUPID OTHER GAMES

Krystal Passero January 7, 2017
Fun game to occupy time but an ad every level can be quite irritating

PATTY Stanley March 17, 2017
Love it.I can work it , leave and come back later to get a fresh view of the puzzle.

M Naumann March 18, 2017
way too many ads. it distracts from gameplay.

Melissa S February 22, 2017
It’s a fun game but around puzzle #16 the dots don’t want to move.You have to start over again.Please fix this.Also, waaaay too many ads.Uninstalled.

Mina Altaf June 25, 2017
It would be great if there was a help button to explain it a little more and if there was an option to turn the sound off.

Joseph Richardson July 29, 2017
No instructions,just moving stuff around.Don’t know what your supposed to do.

Creepela green January 25, 2017
Bored and so many pop up ads

Jude R February 6, 2017
Ads are too long and too many. Music keeps coming back even though Iturn it off.

Tammy Kipple January 20, 2017
I love working puzzles and trying to untangling things. I Sit and play this all the time. Mind challenging and fun

LORI GANNON May 2, 2017
It is better than some others and does help make time go by faster.

Kelly Mackinnon June 20, 2017
No way to turn sound off, could add alternativecolors on levels

Sara Gruenebaum June 27, 2017
I only wish there were more levels! Finished them all in 3 days!

Muriel Wilson-Todd February 18, 2017
I love playing the game and I seen to be able to do what I’m supposed to do. But I’m still not sure how I’m doing it.

May 16, 2017
Makes you want to keep trying until you accomplish it!

Dani Reinhart July 10, 2017
The original untangled online I liked more. Way better music and colors and the designs were a nice touch

Untangle – logic puzzles. The game has many riddles. In the beginning there are easy puzzles and later the logic puzzles are more difficult. The purpose of the game is to untie the wires. if wires intersect, they are painted with red. once you will solve the logic puzzle, the dots will become green and you can move to the next level. this is a great way to train your thinking and increase your brain IQ. we have more brain teasers games, so check them out.