Very cool, but.. Can you please fix the spoiler problem? Because it doesn’t even look like the spoiler is on the car. And can you also make settings so we can choose whether we want sound or not, cause I don’t want music on EVERYTIME I race, I really wanna enjoy just the sound of the cars, but yeah Very good game, just needs those few changes ? 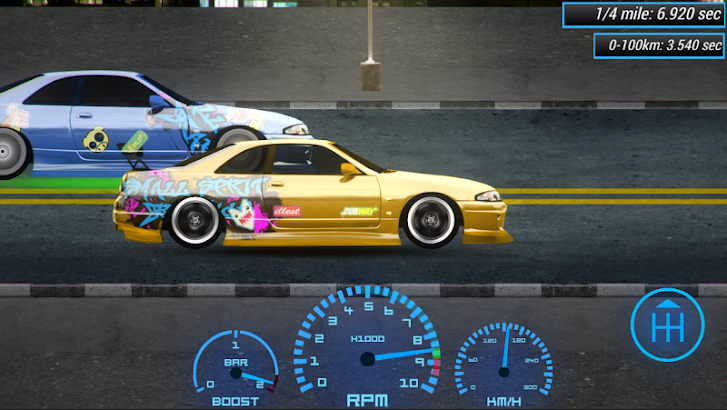 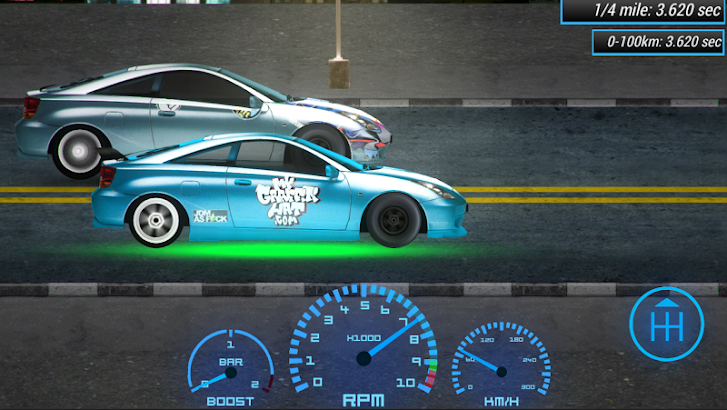 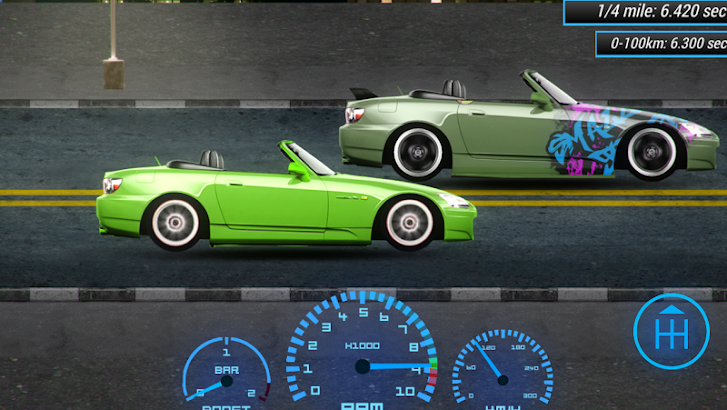 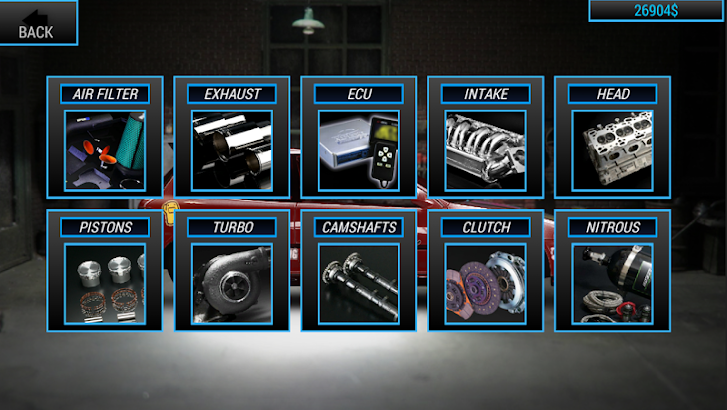 The game is a simulation of jdm drag racing.
It has a very realistic 2D physics, the car’s realistic behavior and unpredictable opponent!
The game has an opportunity to upgrade your car to the full!
You can set the visual details to your car, putting a body kit or rear wing you improves the aerodynamics of your car, and the car’s dynamics on the speed!
Or you can upgrade engine of your car, and tune it to the max! Install the new head of the engine, sport exhaust, improved intake system for better airflow to the engine, set the forged pistons, Nitrous oxide, which will be very helpful to you, and of course the turbocharger with intercooler, for a significant increase in power!
You can ipgrade your transmission’s clutch to better shifting!
Upgrade your tires for more grip! And install Drag Tires!
Setup your Engine Rev Limiter and gearbox!
Also in the visual tuning section you can buy vinyls for your car!
You can paint the body and install Neon!
The game has a lot of different body kits! 5 different wings! a lot of different types of rims! And a lot of vinyls!
During the race, you get a random opponent on the same car!
Try to be a king of street wars!

xX SwagXx January 27, 2016
Can you please fix the spoiler problem? Because it doesn’t even look like the spoiler is on the car. And can you also make settings so we can choose whether we want sound or not, cause I don’t want music on EVERYTIME I race, I really wanna enjoy just the sound of the cars, but yeah Very good game, just needs those few changes ?

Wayne Buchanan December 4, 2016
This game is fun and gameplay is good but what i cant stand is the fact that you dont make any money racing and your racing the same car as your driving over and over again…… lets get some tournaments or a story line in game and pay more than 100 or less a race then i will give 5 stars

Craig Evans February 17, 2016
I loved the first game hence why I’m giving 5 stars, only downfall in my opinion is the lag at the start of the race! I’m using a galaxy s5 so it should run smooth! And definitely needs people to take feedback regular

DeathStorm February 4, 2016
That’s pretty bad when I have a 2GB of ram on my device and it lags so bad that I can’t even race…but yet racing Rivals which is alot heavier on graphics can play flawless on my phone kind of makes you wonder. Don’t even get me started on the ads Jesus this thing is like an ad bomb every time I open it.

Jason Munnoch April 21, 2016
Thought this would be great, wrong! Combine the two games using the first version for racing, second version too scratchy, plus can’t lay down decals… Needs more mods and tweaks, in both versions! 2 stars until it gets better

Bailey Gundesen March 22, 2016
Their is so much lag that is unreal. I’m estimating about 5-8fps during races. Also it takes about 1/2 a second to register my touch. in the main menu its alright but a few frames drop here and their

#Polish Cabbage February 12, 2016
The first game was pretty cool but this one is even better, playing it for about 20 minutes and I have noticed the weird lag at the beginning, more cars should be added later on in the game, you should fix the gear ratio problem because I’m not able to tune any of my gears it just won’t stick.

crazE Vids just laugh ffs February 18, 2016
I love this game…dont know why…we need a down shifter. And what exactly is the goal we are playing for? Addon on body does not work and where is the options??? Sound?? Music etc?? Come on guys…we support you..put more effort into it otherwise i will uninstall.

Kieser Mitchell March 2, 2016
It lags so much I can’t rev or change gears cause of it I can play csr and no lag play this and it lags plus fix and will happily give good review

Brandon Hindle March 16, 2016
I love this game but. The lag is insane!! Racing rivals has so much more graphics and cars and it runs alot more smooth then this. Fix please

Heladio Marban March 12, 2016
The game looks like its fun but the lag is unreal and i have an s7 edge with 4gb ram no good fix and will change my rating

Tyler Jazz April 27, 2016
Give you the worst car to start off with. Then the game lags big time. Hell no to this game.

CrisXAE86 October 1, 2016
There is nothing….i only hear the sound…but i cant see the car please fix that an i will rate again

Nalphy Meyreles April 13, 2016
I want to play this game so bad, but the sceen goes grey and only the sound and menu shows

WHO CARES April 6, 2016
I don’t have any lag in the cars off the line only in the tach needle and jerky back ground graghics

SaintsFlow January 19, 2017
This game is amazing but there are some features which i dont like such as the AI are too easy to beat. And i would appreciate if you add more cars, visuals and upgrades.

escarlyn acevedo May 18, 2016
The game is go,until you take off from the finish line then the whole game gets glitchy. Please fix

Jonathan Nieves February 26, 2016
It’s OK game but the lag is crazy until this gets fix I don’t want to play it

Justin ontiveros April 2, 2016
Fun. I built a good fast car. But cant be consistant because of the lag.. Fix please

Kieran Radford February 1, 2017
Might just be my phone(Xperia z5 premium)but there is literally just a blank screen when I open the game.

Tyce Cole March 27, 2016
Lag is horrible, I loved the first game no problems at all but the lag on this one is horrible

Omari Oscar August 28, 2016
Every time I press race it not working g

justin mason November 15, 2016
Everything is black in the rave excpet the HUD. Cant see any cars whatsoever.

William Wincentsen April 5, 2016
I have the brand new galaxy s7 and I have the best phone on the market I should be able to play it on my phone please fix this

Joshua Rednall June 26, 2017
Using a Sony Xperia x, played the first game perfectly and looked forward to playing the sequel, but I can’t see anything other than the buttons, sound works fine and I can even race successfully, but absolutely no visuals…

Mateusz Gorski March 21, 2016
The lag is terrible so many better free games out there

Kenneil Padmore February 11, 2016
It keep on sticking and has lag it is not showing the spoiler

Elite Gamer February 4, 2016
Glitchy needs some work but like the options