It looked fun but way too hard! In the horse racing world you have 3 faults and you’re out. In this game if you gt ONE fault it goes FAILED. Also lots of annoying ads ? I suggest some adjustments, because with the right programming it could be awesome game ☺ 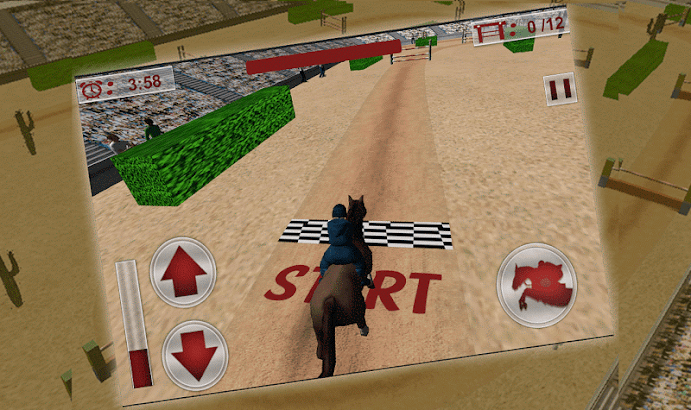 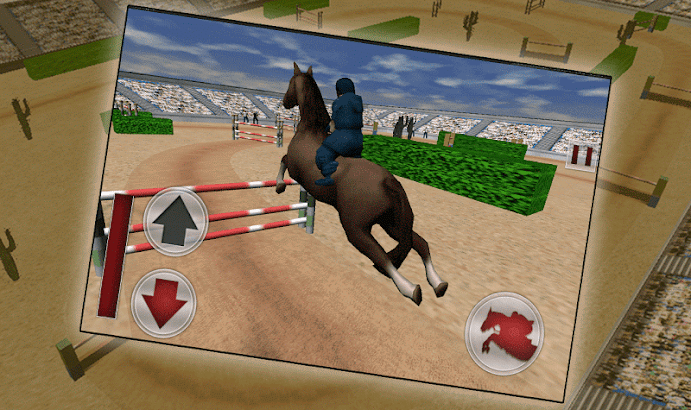 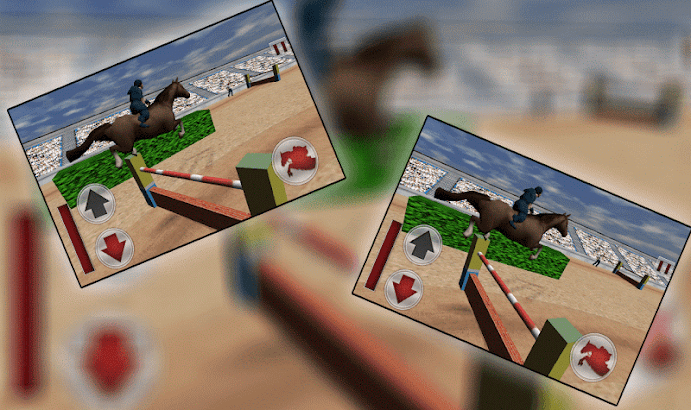 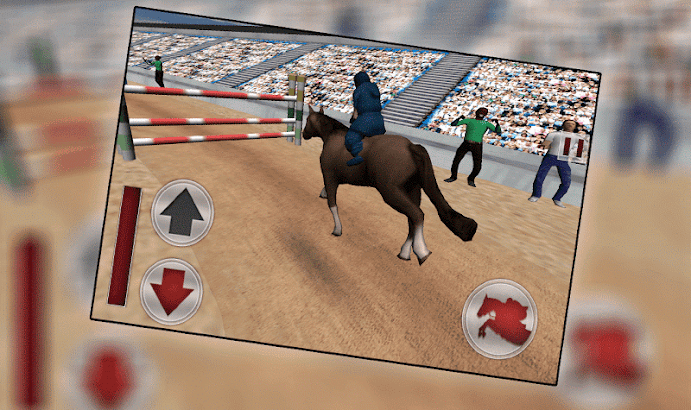 Are you thing you are a perfect horse rider. You trained your horse for jumping the different obstacles/hurdles and his performance is so good. We are providing you horse riding action game in which you can also have black breed horse. It is true jumping game having real environment. This horse simulator has come across different hurdles and run fast.

Stadium is full of audience which comes to see this action racing game and appreciating with claps and hooting for the best rider. You must proof a best rider and full horse control skills when race start. You must be aware that thing your best performance will be sign of victory and earn the cash prize. This horse simulator starts the race running the horse slow. Tap the left button to increase the horse speed. To cross the hurdles for jump tap the right side button. There are many hurdles come in way and you horse cross these hurdles so efficiently. You must control your horse speed and look ahead upcoming hurdles. You must care that your horse hoof does not touch the crossing hurdle barrier and landing smoothly. You must continue this practice till to complete your level successfully.

A huge amount of cash reward is waiting for your brilliant performance and also ground audience is standing to appreciate your performance to standing their seats with clapping and hooting. After completion of your first level successful upcoming levels will be unlock automatically.

This adventures game is totally free on play store.

For more queries you may contact by email:
[email protected]

Note: This game is free and supported by Ads as per Google policy.

lenny miller June 16, 2017
It looked fun but way too hard! In the horse racing world you have 3 faults and you’re out. In this game if you gt ONE fault it goes FAILED. Also lots of annoying ads ? I suggest some adjustments, because with the right programming it could be awesome game ☺

Lillypiey W. August 25, 2017
I think it’s okay but when you have 1 foul it sometimes says you had 3 or 2 fouls, and after your done with the level (wether you maid it or not) their is an ad

Megan Owens August 5, 2017
This game is so rubbish I would give it no stars if I could do not install you would be wasting your time playing it ?????

tiana Makina September 4, 2017
I love it but I can never get past the first yellow jump

UnknownJuly 15, 2017
I hate it it’s to hard every time I jump I always failed

ThePiperAtTheGatesOfNowhereLand March 26, 2017
Horrible Graphics and Way Too Many Adds

Paige McGrath September 17, 2017
It’s boring and it is too difficult.

Nick Browne August 17, 2017
Amazing game I would deffently recommend it

UnknownMarch 13, 2017
It is so dumb i can hardly get past the first level and the horse goes so slow even when i try to pick up the speed

Kadi Sparks June 23, 2017
It was stupid and I don’t have time something like that. It was just plum stupidity

Lehanna Green January 3, 2017
Please think about your space on device before getting the game because it sucks

stacy thirlwell February 3, 2017
It’s a good game but it could be better

Chloe Shelton April 4, 2017
Hate it the jumps are hard to do

Developer JK-Apps May 31, 2017 Hi there! Thank you for your feedback, we’re working hard on our app to make it even better.

UnknownJune 10, 2017
I think it is a good game by this game we can learn horse riding

Gamer,Vloger and Toys February 18, 2017
I love horses The for making

Kirstyn Esler August 20, 2017
It was easy once you knew when to hit the jump button

Developer JK-Apps January 24, 2017 Thanks for your feedback!