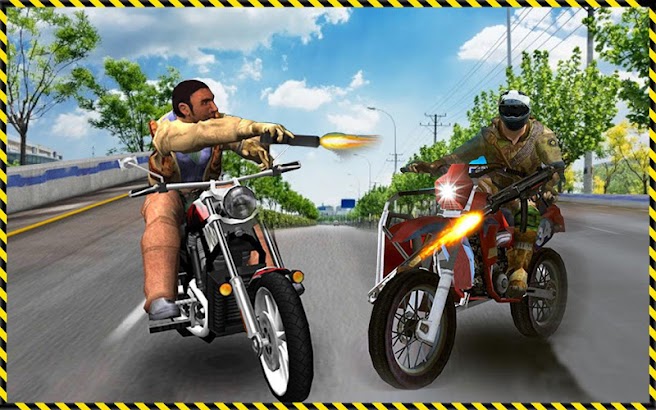 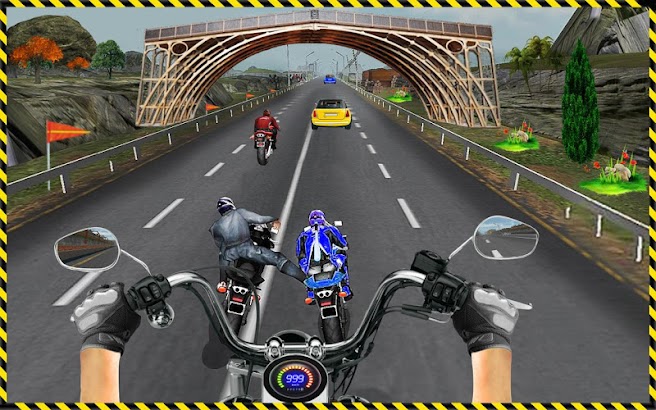 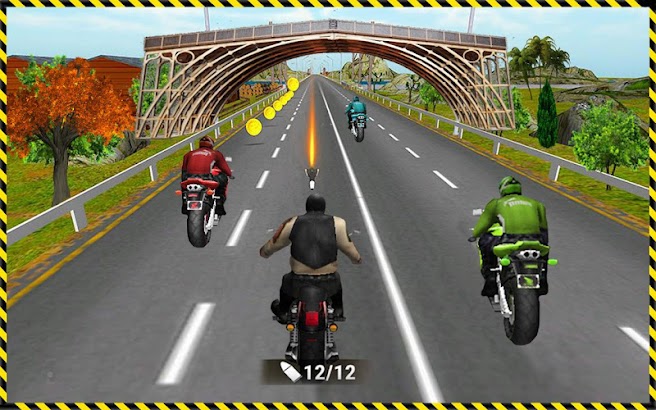 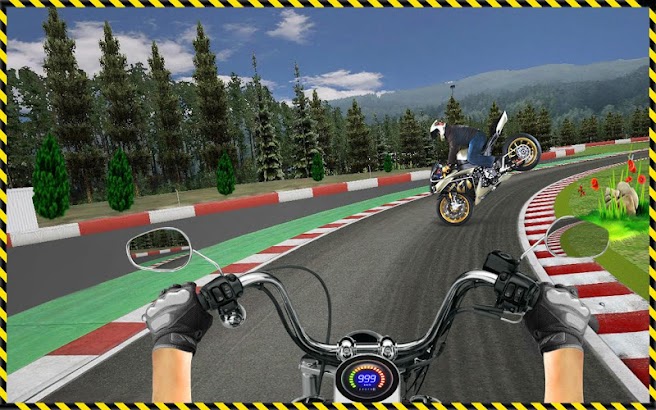 Stunt Rider Bike Attack Race is a very interesting thrilling simulation game consisting of racing, shooting and various heavy bike stunts. This stunt race game is different from other bike games because of its graphics, its sound, scene, tracks and several other aspects which you will see and enjoy during playing this bike racing game.

Now answer me are you ready to play Stunt Attack Bike Racing game which is very closely related to the real, physical aspects of bikes. Racing, shooting, punching, kicking other bikes gives the player an interesting, marvellous and never ending enjoyment. Kick, punch, and do wheeling on bikes back tires in order to win the game, to get reward, bonus and main thing to achieve success to your next mission.

Now are you ready to enjoy and to play this bike adventurous game on your smart mobile phone. First come and be aware of the environment of your game. Avoid from other obstacles, vehicles, gangsters coming towards you to kill you. Stunt rider bike attack race is a full road racing adventure.

Stunt Rider Bike Attack Race has six real environments modern city, rain forest, beach city Sahara desert. Which will give you a base to know your location and position that where to go and how to go. All these environments will open one after another as you will pass the previous mission; next mission will be unlocked and will be ready to play.

This bike shooting game has many latest heavy sports bikes from all over the world. All the bikes are well designed and equipped. Each bike has its own speed, power, handling and several other functions like road grip. All the information about the bike is given at the right side of the bike. There is eight bikes in this stunt fight game.

This bike race shooting game has eight characters also. Each character has its own kitting, uniform and dressing regarding to their personality. Each character has Eagle Desert gun that helps in shooting you enemy that hits you. You can select your character according to your choice. The player of this stunt rider game is equipped with modern guns and they also know the fighting skills very well.

The game play of this bike racing game is very simple, jut download it from play store and enjoy it. On the menu screen there are five buttons in a row setting button is for setting you sound, music and resolution, auto garage button provide you option to select the bikes and there riders then press to go next button and select the environment now game is ready. Tilt your phone in order to avoid from obstacles and vehicles. Tap punch and kick option to harm your opponent bikers. Collect different pickups like Boost, Stunts and Power. Smash the gangsters going away from you by shooting, kicking and punching. Use boost to increase your speed.

1. Real bike movements and moments.
2. Awesome road grip and game play.
3. Free Google play just downloads and lost in the game.
4. Race as much as you can to earn cash and to unlock next mission.
5. Real environment and sound effects
6. Game is 100% free and no need internet connection
7. Real battle on road with other bike riders

So, if you like our stunt rider bike attack race game than visit our play store account Thesniper to enjoy such more games and don’t forget to rate and review the game.