With the Developers recent changes AGAIN this game is no longer worth your time and not worth ur money. All strategy has been removed. Income is near impossible. There is no defense. This was always attack heavy but u had hope if u built right. The developers have taken that away. Your only chance now is too spend thousands on gold for there gold units. N that’s not a lie. Buy ur kids games, way more bang for ur dollar 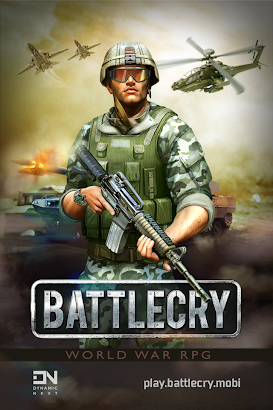 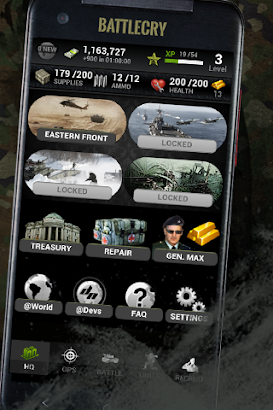 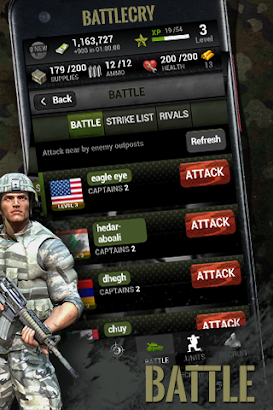 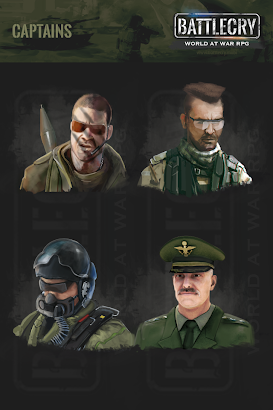 Join now, build the greatest military force, and rule the the world!
(More than 500,000 downloads in Android)

Battle Cry – World War Game
– – –
Plot: In a future world of war and chaos, a hero rises to lead his forces to victory in epic battles with the enemies to bring back order and to dominate them all.

Game Features
– – –
Battle Cry is one of the most feature rich and diverse world war RPG ever created. It offers players a unified gaming experience, whether you are on Android devices, iOS, Facebook, Chrome-Store or on your browser, this allows you to run your same account from anywhere,

★ Engage OPERATIONS at various parts of the world… capture the land back and clear out the enemy sectors.
★ Build your vast military force (ARMY, AIR FORCE, NAVY and SPECIALS) with a large set of units to choose from.
★ Build up your defense with OUTPOSTS.
★ Show off your military power in BATTLES, defeat and decimate your rivals, destroy their defenses and capture their resources, gain experience and progress through unlimited levels.
★ Update your your military strategy with Skill Points, Tactic Points, R&D and various military drills.
★ Recruit Commanders and assign them to command your units during battle.
★ Build INFRASTRUCTURE, INDUSTRIES and POWER units to manage your ECONOMY and gain cash flow.
★ Defend your FEDERATION ZONES, defeat the enemy waves and level up your FED CAPTAINS.
★ Infiltrate enemy lines and engage in SPECIAL OPS to capture strategic locations and gain critical advantage.
★ Use your COMMAND CENTER to switch your command to various war fronts around the world.
★ Earn unique Honors (Achievements) Medals and win respect for your forces.
★ Order commissioned Strike on your rivals to make them restless and bring fear into their minds.
★ Declare DIPLOMACY with your neighbors and keep them close.

Game Features (ALLIANCES)
– – –
★ Join powerful ALLIANCES and rule the WORLD as a team.
★ Chat with your ALLIANCE and equip powerful ALLIANCE ARSENALS
★ Engage in ALLIANCE WARS and win exciting war rewards.
★ Earn Alliance’s respect become the GENERAL… Or start your own ALLIANCE and recruit your members build a new team
★ Capture other ALLIANCE STATES and assign your own GOVERNOR to collect hourly payouts send to all your alliance members.
★ Capture other STRATEGIC BASES to collect payouts
★ Join TOTAL DOMINATION to war 3 other ALLIANCES simultaneously… winner takes all the rewards.
★ Send and receive powerful ALLIANCE BACKUPS.
★ Find matching alliances with SEEK N DESTROY
★ War against automated AXIS ALLIANCES to win exciting rewards and new ALLIANCE ARSENALS.
★ Use COUNTER STRIKES to revenge rivals who messed with your alliance members.
★ Take part in weekly TOURNAMENTS and win respect in the game for your alliance and yourself.

Daniel Edwards June 27, 2017
With the Developers recent changes AGAIN this game is no longer worth your time and not worth ur money. All strategy has been removed. Income is near impossible. There is no defense. This was always attack heavy but u had hope if u built right. The developers have taken that away. Your only chance now is too spend thousands on gold for there gold units. N that’s not a lie. Buy ur kids games, way more bang for ur dollar

Edward Minford October 23, 2017
Damn good now that WW is dying it’s better. 9/27/15.Kinda a blend of WW and modern war, without the glitching, cheating element thank God! Could it be that someone finally got it right? Time will tell… updates to definitely follow. Good job people game is running well no issues thus far. 2017 Mar 10, Customer services could improve a tad. Carry on folks.

Tom Wright July 8, 2017
Good game I like it! Just seems really slow to load between each move or button press, I have an s7 so It shouldn’t be my phone and other games don’t have a problem

Gumby Goober August 14, 2017
Game good so far. Very simple gameplay and strategy. Only issues are with inappropriate player names and foul mouth language and bullying. Looks like thevTOS violations are not enforced.

Developer DYNAMICNEXT GAMES August 16, 2017 It will be of great help in improving the game if you can report such accounts/instances to [email protected]
Thanks

Wayne Love Jr. October 4, 2017
Good game, but glitchers are becoming more numerous.Been playing over 3 years, and there is no way a 3 month player should be level 160, with all feds completed.I fear this game is headed into the dust bin of history.

Trevor Parker August 21, 2017
It’s the best game like this I have ever played its a lot of to play battlecry. Dont give this game1 star at least give it two even if you hate it.

Heidi Coleman June 24, 2017
Great strategy game. Highly addictive im warning you i also play Downtown Mafia and between those games i dont play anything else. Download and you will see. Also like how its interactive with online players. I have met very interesting people on the games two thumbs up @devs!!!!

Gojko Pavasović October 11, 2017
Graphic glitches…. And you didn’t fixed it. Uninstalled after many years :(Reinstalled but still have graphic glitches forces me to close open and over and over again…. I’m on android 6 Huawei P8 lite

Developer DYNAMICNEXT GAMES October 6, 2017 Please write to us at [email protected] and we can help you out. Thanks!

Kyle Humphries July 20, 2017
Some tweaks need to be addressed still. Some lag when loading. Vault limits need to be increased and equipment costs lowered. INCREASE ALLIANCE MEMBER LIMIT OR REMOVE THE LIMIT ALTOGETHER. Remove fight another from lost battles.

Kathy Mattison September 29, 2017
HERE’S AN IDEA DEVS, HOW ABOUT UNDERBIDDING THESE GUYS, they are making a fortune right now because they underbid your cash to in game purchases … Volume DEVS, VOLUME! Take the sales away from them. The game itself is good but not enough being done about the cheaters who offer to “fix” your income for you for a price JUST LIKE WORLD WAR!! For a mere$100-$500 OR MORE, they take over your account and add income. Added a star because I HAVE seen players removed but they just keep making new accounts and start soliciting all over again.

Developer DYNAMICNEXT GAMES August 17, 2017 We do regularly take out such players from the game. Thanks!

UnknownAugust 24, 2017
This is one of the best role playing games I’ve played in a while, I remember when this game was still new. I think the older version had more better controls, but I guess this version kinda tryed to keep them, but couldn’t. Anyway, it’s a great game.

Developer DYNAMICNEXT GAMES August 31, 2017 Thanks for playing and the review!

C. M. Black June 17, 2017
I’m playing on a friend’s phone. No idea what I’m doing. But it’s fun. Everything works and plays well. I’ve never played a multi-player game before. So far so good.

Developer DYNAMICNEXT GAMES June 22, 2017 Glad you are having fun!

ReuseMuis Gaming August 2, 2017
Absolutely love this game. Sad to think I only moved to this game now when my previous one closed down. Thanks for ahving an alternative epic game on the playstore

Developer DYNAMICNEXT GAMES August 3, 2017 Hi, we are sure you are going to like it here as we have lot more going on in the game and we have active support along with a thriving community. Thanks!

Dominic Neaville September 19, 2017
For the ones that come from Storm8’s World war, this game is a great replacement if not better than the original game.Communication with the developers should be improved and trash talk should be monitored.

Joey H June 19, 2017
Not as good as their previous World War game. I still am having a blast with it though. I don’t like the new commander system though.

Stan Dean October 21, 2017
Was good game until developers decided to control conversation in game.They silence and account they think said anything offensive

Louis L June 16, 2017
The game itself is a good strategy game however is getting over run with cheaters, just like in World War game. The cause of this is the poor value of cash to gold value in game. As it is now … DON’T SPEND MONEY until all cheaters have been either reset or banned! I know the cheaters out there will throw a fit but WORK your accounts! If you have to cheat to play, STOP PLAYING!

George Houston September 23, 2017
Needs more work as well to add up Naval units like Aircraft carrier and several Naval units especially add up some air and ground units and add up some defense building on outpost and maybe 5 more building on economy to help straighten up strategies on economy to level the upkeep to balance the economy and upkeep on fair level to make things fairly and add up cool stuff in general stores like buy honor mental for skill points or other kind points, buy specific kind of armored vehicles and much more with gold bars or skill points and add up Nuclear war and Nuclear units as well.

Ben Chapman September 14, 2017
Seems a good game, New still learning the ropes. Would be a good idear to create a forum page so everyone can speak and noobs can learn esier

UnknownAugust 22, 2017
Too much hate and bullying. But other than its ok.

Developer DYNAMICNEXT GAMES August 22, 2017 You can always report such issues to [email protected] with screenshots. Thanks!

Heroes Charge October 4, 2017
best warring game on playstore. if devs are little more active this game can have million of Active players. 5 stars

UnknownSeptember 18, 2017
I love this game it’s one of the best out there, You get hackers in every game it’s always been known I see more and more accounts being suspended, We’ll done devs for giving us a excellent game ?

Craig Carter August 25, 2017
Coming from FOW and this game is so similar that I’m getting the hang of it quickly!!!! All Hail The Perils!

Developer DYNAMICNEXT GAMES August 31, 2017 Thanks for playing! You will realise we do have lot more going on here.

Carter Bailey August 12, 2017
New to the game right now so ratings could change. Thanks for the app, so far it’s fun.

gavin m July 8, 2017
Was a player of world war but battlecry is a far better game than world war would have ever been keep it up best game ever

Joseph san nicolas October 5, 2017
Well its seems that it has been upgraded miss the old world at war i had 200 quadrillion lol from just sitting around letting my money builds up

Markuss May 21, 2017
Very nice little time waster if you havnt got anything to do

C WT July 1, 2017
How much time and money can afford to waste is how well your account will be built.

UnknownJuly 8, 2017
When I first played battle cry I thought it sucked until I got further into the game

Paul Brown August 3, 2017
Like the game at the min just come from forces of war games are very similar but battle cry graphics are way better

Developer DYNAMICNEXT GAMES August 3, 2017 Hi, we are sure you are going to like it here as we have lot more going on in the game and we have active support along with a thriving community. Thanks!

UnknownJuly 1, 2017
Need to add more members to alliance and not have to be at full health to strike off list

Noni Boyd June 11, 2017
Would be better if you did not have to take months or years to build sustainable income.

UnknownJuly 13, 2017
Great way to spend a lazy day, and meet interesting people from around the world

Rigo Rangel September 26, 2017
More interactive would be better. Players need to fight each other it would make it more interesting.
Tags
DYNAMICNEXT