The unique IDLE RPG on Google Play. Form your heroes and battle for victory!

After a year of playing, I can say that the game is ok. I haven’t gotten bored of it yet, though there isn’t too much to do. Best to have when you have other games and you need something to occupy your time as you wait for their cooldowns or w/e. But after all, this is an IDLE game, so you shouldn’t be expecting deep interactive gameplay. 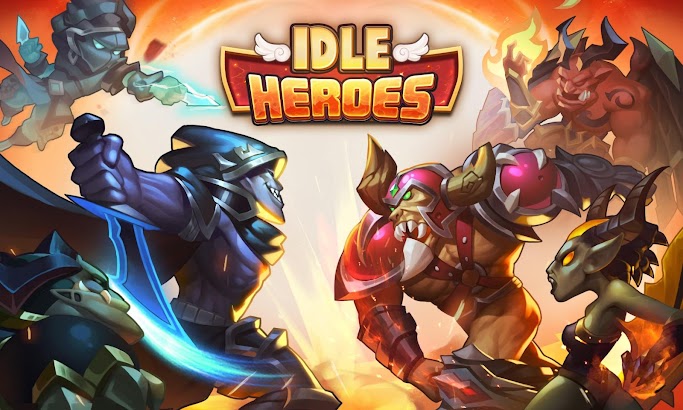 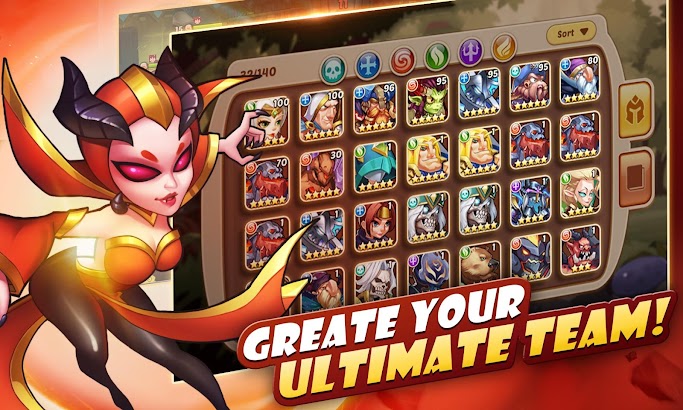 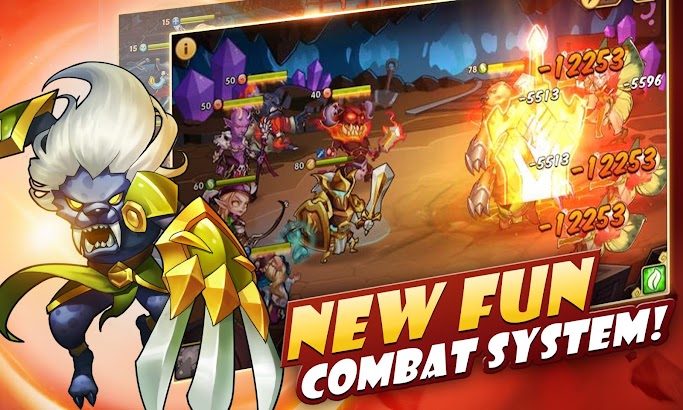 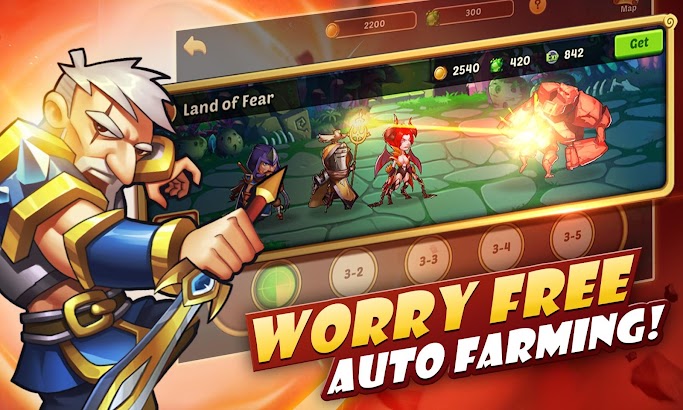 “A much-anticipated IDLE RPG masterpiece on Google Play Store!!!”
Join millions of other players around the world and start your journey from Sara Forest to the High Heaven, leading your band of heroes into ancient ruins to battle the forces of darkness!

★IDLE System★
Set your heroes training while you’re away. When you return to your phone, they will be stronger, gained new abilities, and ready for battle. Grow & Train a powerful squad without all the grinding!

★Evolving Strategy★
More than 200 Heroes in different factions with specific skills. Summon your Warriors, TRAIN them to become powerful heroes, or convert them into Spirit material for EVOLVING. Forge magical gears, and outfit your warriors for victory!

★GUILD Wars★
Fight alongside your friends and players everywhere in a war for control of the floating continent. Join multiplayer guild boss-battles and lead your guild to supremacy!

★Worldwide Arena★
Put forth your best heroes to do battle in the ARENA. Watch them PK online in a multiplayer contest for glory! Climb the Leader board for the best rewards!

Lor Stout October 24, 2017
After a year of playing, I can say that the game is ok. I haven’t gotten bored of it yet, though there isn’t too much to do. Best to have when you have other games and you need something to occupy your time as you wait for their cooldowns or w/e. But after all, this is an IDLE game, so you shouldn’t be expecting deep interactive gameplay.

Crazy HybridChick October 25, 2017
I think its a great little game. Simple to play, and you dont have to spend hours to get anywhere. Sit Idle, get xp and materials to level up your heroes! There are more parts if you want to play longer but not too time consuming. Loved it!

dan ledouche October 24, 2017
This game is ok. If your are a free player you will get beat by everyone else, have very limited hero space to the point where you have to get rid of heroes in order to upgrade, and there are long periods of time where you can’t advance. Progression is very very slow and there have been several times I just wanted to quit playing altogether. Give players a sense of progression and they would enjoy this game more.

Matt Leroux October 24, 2017
Started off great . But i have to agree with some of the reviews. Good game concept. Dont mind spending a couple bucks on a decent game but this seems to be lopsided on price. But ive gotten 3000 free gems since i started a couple weeks ago. So im happy

Travis Lunsford October 25, 2017
I don’t normally write reviews. This game however has prompted me to do so. It is a great game until around level 50. Then it heavily becomes pay to win. I have a full team of 4star heroes in all greens. All level 60 plus with synergy bonus. I am stuck at the level 55 boss battle in campaign. I am currently unable to continue because they have not properly balanced post level 50 content. Perhaps it was designed this way to get people to fork over $$. Either way, good game until level 50. Then you better have deep pockets or look for another game.

UnknownOctober 24, 2017
Great game. Definitely recommend. However I have been having technical issues with it crashing every 45 seconds to 5 minutes of having been opened.this is likely to be an issue on my end however as I’m not sure how to check the specs on my phone(maven zte 3 I believe). I’ve played regardless though and thoroughly enjoy this game despite this unfortunate problem.

Nicola Leyshon October 25, 2017
Was enjoying the game until I hit campaign 8-5 And the guy is impossible to beat same in the tower on level 135 and not getting enough heroes go upgrade to 5* let alone anything else. Have messaged in feedback but not had a response yet

Vojislav Rakovic October 24, 2017
3 months of play: still adictive and fun, it’s 5* without doubt, but i have few sugestions: first, do some balancing with brave chalenge, its sometimes unfairly hard, feels broken. Second, why is campaign advancing restricted to level? I have to wait 10 or more days just for 5 campaign stages!? Why?! What’s the point? Please think over it.

Kegan Dodd October 24, 2017
I don’t hate the game, I just feel like it deserves more low star reviews because there is no way on Earth that this game is rated that high. Too many fake reviews that the greedy Devs have paid for. This game is one of the most well designed pay to win games in existence. Walls everywhere, slow progress everywhere, unless you pay. It’s a paying game, pay here, pay there, f2p players don’t stand a chance to win anything unless they persevere on a old empty server, for 2YEARS.Otherwise, can be fun if you don’t care about playing it more then twice a day for short periods.

Muntazar Syarwan October 24, 2017
hello developer, your game is awesome but i star to think when i hit stage 8-5, the requirement power is 21k, but i cant beat that gerke with 60k power, what the h*ll this unbalance, please do something and i will change it to 5 star

Yuri Klaassen October 24, 2017
Well servers are dying so I can’t recommend it. there are no new people . There like 20 servers so merge servers or something. No one talks anymore so soon the server is death

Jhester Van De Ramos October 24, 2017
Really fun but you can easily get stucked in levels and have to wait a whole day or so to gather enough resources to enhance your team otherwise fun

Kodep Iyong October 24, 2017
It pushes very hard to make people play by making the non-IAP as mind numbingly tedious as possible.If you have money to burn and your furnace isn’t doing it fast enough this is the game for you. Even spending a moderate amount of money doesn’t add value as the game likes readjusting characters constantly. Normally balancing isn’t a bad thing but the amount of time and effort you need to invest in something to make it good just isn’t worth it without some stability. For example, you build a strategy of strengthening a hero that is good with the stun ability.Then your pet which helps with stun gets significantly nerfed so now you need to readjust.It’s just not worth it.Also the wait times are unreasonable,resources are too uneven,and the difficulty curve is insane in that it is basically nonexistent then goes straight up then slopes down.One time I was on the 5th stage of an area for 2 weeks. I beat it through luck and the next 15 stages are easier to beat.

Developer DHGAMES October 24, 2017 Thanks for your feedback, we will send it to your devs team.

Lee Yaeck October 24, 2017
Well they have finally went all the way over to greed. Must pay to win now. Was fun but now it sucks.

Niles Johnson October 24, 2017
Longest game I’ve ever played on my phone. Always something to do. Don’t even need to spend money, but makes it more fun if you do.

Drew Hollenkamp October 24, 2017
This game is pay to win. The devs do everything to entice you to buy buy buy. Nothing about this game is worth your money. Move along.

John Weber October 24, 2017
Ok game, but if your not willing to pay, you won’t be competitive at all with good top players.

Chris Dedeaux October 24, 2017
Heres a review some someone whos been playing the game for a year. Dont listen to those other reviews they havent even played for more than a day. The game is easy and fun at first, but once you hit about lvl 70 things get really slow. Plus im pretty sure theyve set up a paywall at stage 8-5 because Ive been stuck there for weeks now. I have all max lvl five star champs and still cant beat the stage. So if you get into the game be ready to spend money or youll just be waisting your time. Also the combat is pretty slow until you can skip it. The game IS VERY generous with diamonds. But you get no good champ drops out of summons. Basically the game is kinda fun at first, then in the middle really picks up, but by late game if you dont spend money you might as well give up.

zak pearce October 24, 2017
Love this game but now it keeps saying verifyingaccount so i cant log on ?

para 711 October 24, 2017
Norma is op, can’t defeat her she heals more than damage is dealt, game is fun for the first three days than you hit a Wall and you get stuck for days, you can play maybe 20 minutes a day

Alex October 24, 2017
It’s just so addicting, and when you grab that next level hero, it’s electrifying.

Donut Man October 24, 2017
Let’s just say I spend 2-4 hours on this game and I don’t get bored? (for the developers I factory reset my phone and I lost my current progress can you please do something about it) my ID is 84397110

UnknownOctober 24, 2017
This is the worst game ever i hate it its very stupid and realy weired so can u fix it and make it more fun plz!!! ?

Developer DHGAMES October 24, 2017 Thanks for your feedback, we will send it to our devs team and keep improving our game.

Justin Poirier October 24, 2017
Fun. A little slow until you get X2 attack speed. But really fun have multiple characters in multiple realms

Dobre Dan Adrian October 25, 2017
4 stars because I cannot play on WiFi. I have to use my mobile data and right now I am using roaming…

UnknownOctober 24, 2017
I like the game, its mechanics and everything else but what i dont like is the rewards are getting more less, its starting to get where i dont want it to go and dislike is getting higher but still im hoping they return back the proper rewards to get, hopefully.

Foxaaw October 24, 2017
Stop lying about the prizes every single thing is about $1 more expensive than it says there.

Briane Macalling October 25, 2017
Why can’t I type my name? It just freezes whenever I should enter a name.

alex ander October 24, 2017
this game is for those people who prefer a chill game rather than complicating things with a lot of mush buttons and moving around.

Aaron Erben October 25, 2017
Nice laid back game. Friendly ui and grate format. Auto battle system is the best if your like me and love easy loots ?

Max Cat October 24, 2017
Super fun! I feel like anyone could be good at it and have fun! Even though I got 12th in the crystal crown league… ?

Connis Brown October 24, 2017
Pretty addictive! Stright forward but enough things to do to keep you interested.