Become the ultimate Dragon Master in this real-time multiplayer game.

Fun for a while then frustrating. In short basically a waste if you spend money on this. Going to uninstall if they don’t fix the matchmaking. I am lvl 8 and got a string of higher level opponents from lvl 9 to lvl 12 all easily killed me and dropped my rating significantly. 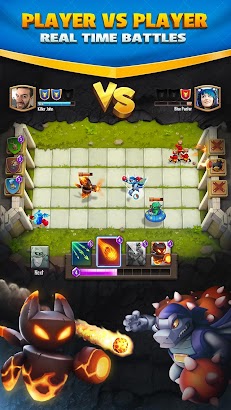 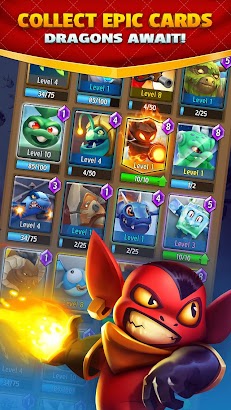 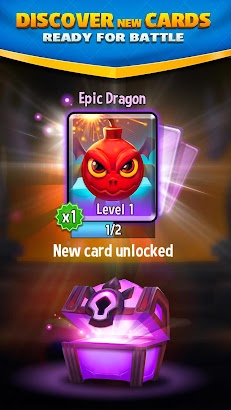 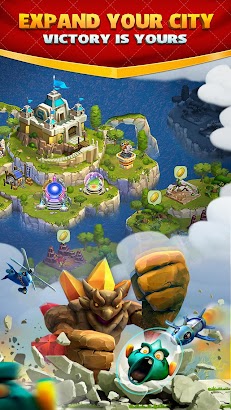 Best Dragon Game Ever! All in stunning 3D. Become the ultimate Dragon Master in this real-time multiplayer game. Collect Dragons, Spells and Defenses. Manage your battle deck to build the perfect strategy and start winning battles against other players by crushing their castles, one League at a time!

Be social to become a champion: Form or join an Alliance to share cards, exchange strategies and chat in real time. Alliance members will also get special chests full of battle resources!

As a Dragon Trainer, you will own an archipelago of fantasy islands surrounding your castle. There you’ll be able to keep your dragons in habitats and summon rare new creatures through a portal!

REAL-TIME PVP ACTION!
Clash against other players in real time and take flags from their Castles
Create your deck of Dragons, Spells and Defenses to win
Gather Trophies from battles and become a champion in the Leagues and Leaderboards

PLEASE NOTE! League of Dragons is free to download and free to play, however, some items can be purchased with real money.
If you don’t want to use this feature, please disable in-app purchases in your device’s settings.
Network connection is required for playing.

A new version packed with some of your top features again ?
Support for new Units and a new “coming soon” mode to see upcoming stuff!
Friendly battles have landed in LoD! Tired of trying new units and strategies in the training camp? Do you want to see who’s the best in your alliance? Try friendly battles now!
Want to switch between decks? Try the new multi-deck feature. You can even copy decks from your friends and foes!
As usual, improvements and polishing are included. Enjoy the game!

Jeramy Hannah October 22, 2017
Fun for a while then frustrating. In short basically a waste if you spend money on this. Going to uninstall if they don’t fix the matchmaking. I am lvl 8 and got a string of higher level opponents from lvl 9 to lvl 12 all easily killed me and dropped my rating significantly.

Real Lebel October 7, 2017
Looove it but…. There is enough level 7-9 that a level 8 shouldnt be battling level 10+ every battle. I love a challage but this is becoming no fun… Level 8vs level 13 not cool guys figure this out please famir battles… Ive spent a fair bit of money and have been playing for months but will be deleting this game if i continue as a level 8 to battle 10+ its simply no fun…been saying this for a bit can someone contact me with information on the matter. I like how you can say if you enjoyed the battle or not now but is the unfair battles going to continue? 2800 trophy vs 5500… Come on not cool giving this just fee more battles sucks i wasted time and money thinking it will get better… Giving 2 days to fix or get back to me with if this is going to be fixed. 3 people from my alliance have deleted game for same reason. We are all top 100 guys who buy chestd

steve frans October 5, 2017
Not bad … some glitches that need to be fixed.. overall though it’s pretty fun to play

Hannah Naguib September 24, 2017
The games great but I think you should add another update cause the last updated update rocked

Nicolas Cucatto August 31, 2017
Its happening very often than when starting a battle the game hungs and you need to close the app and open it again to connect, which makes that you loose a Lot of seconds that for sure Will cost you the battle. Also Is not the first time that I won a battle and it gave it to my apponent. Bots are so overpowered, they need to get Fix. With all these errors and taking into account that u Will probably figth a bot most of the times, There Is no way to battle properly. Such a shame for a game with potential.

Vamp HD September 10, 2017
I liked this game and played it with my friends, It was very fun for the first week, we made an alliance together and hung out for hours on end playing this game, then 2 of us were playing today and we deleted it because we couldn’t get any new cards and our chests take 3-48 hours to open. Not good

Jay Minshull September 2, 2017
Its fun, but then you cant get chests cause they take WAY TOO LONG TO OPEN, and you cant win because upgrading the cards is WAY TOO EXPENSIVE, I was in league 4 and then I went on a 10 losing streak. ?

Romeo Caimol September 9, 2017
Ok thx anyways I have had to go bad news

Crime Starter546 September 4, 2017
Way better than Clash royale.In this game I get epic instead of commons in Clash Royale!

Kamal Punitharajah August 5, 2017
I like the sudden death and the idea. Are you going to do some events?

snap jaw99 August 8, 2017
I think that I should and everyone else should unlock cards faster I am in ice league and I just got a rare from training arena and I don’t have either of the Commons from dark arena

Earth 259 August 2, 2017
i just started to play it and i love it! i think i love it because i love dragons and vlash of clans this game is like clash royal with dragons!

ashwin saravanapavan August 9, 2017
Feel unpolished and they match u with player that are soo hight lvl (lvl 5 vs lvl 10)

UnknownAugust 14, 2017
I hate the internet connection for the game I like the game dragon city socialpoint

Maxime Arsenault-Roy August 5, 2017
3 min of PvP for 3 hours of waiting for your price… It to much

Nigel Ellis August 2, 2017
I think this game is good what it told me what I think of the game

folake jaiyeola August 13, 2017
I think it is a good game but it keeps glitching out

MIKE MORENO August 23, 2017
I dont like the dissconnections, in that momment I cant do anything ans usualy lose the fight

UnknownAugust 11, 2017
I love the monster or dragons they looks so awesome