Good Everything is very cool and i like the heros but there is no daily reward. The bonus game isnt that good because you cant get a lot of gems. I would give you FIVE STARSif you put in the daily reward. So PLEASE put the daily reward in like the other games or this game will be one of my baddergames 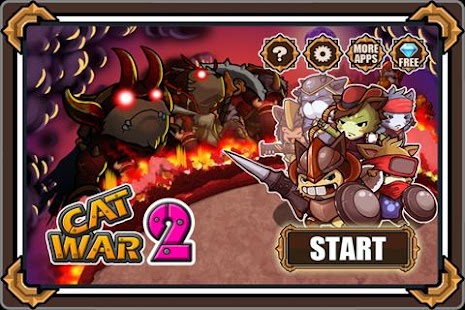 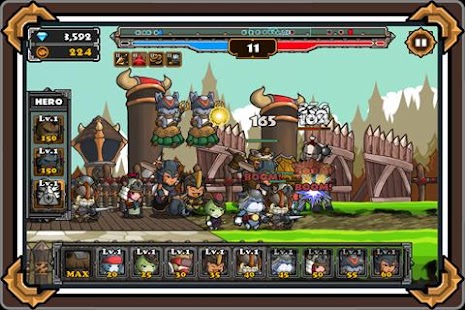 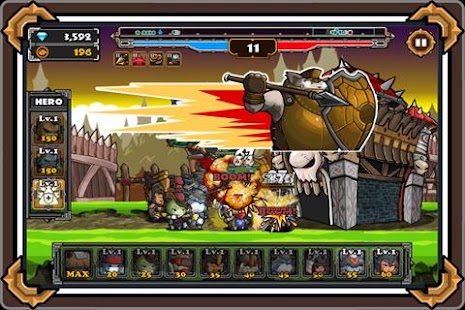 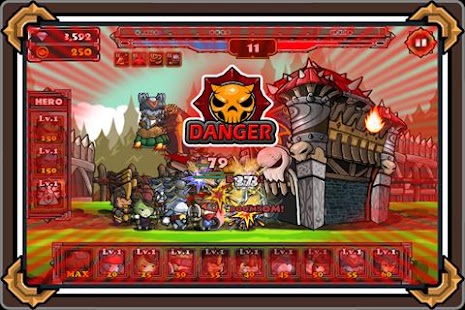 Jerome Chang May 28, 2015
Everything is very cool and i like the heros but there is no daily reward. The bonus game isnt that good because you cant get a lot of gems. I would give you FIVE STARSif you put in the daily reward. So PLEASE put the daily reward in like the other games or this game will be one of my baddergames

angelic nillo March 17, 2016
After i defeat the final boss in the boss mode it prompted me that a cheat was detected! Seriously? What is happening to this game? After 3 times i tried to restart the game it finally worked but after several game modes it appeared again. What to do and how to fix this? It makes me furious coz i don’t even tried to cheat this game..one more thing, the graphics is funny when i tried to press the free gem, it appears that it is broken or something .. need to know how to fix my problems .thanks ..

Shin Natsu February 1, 2017
Really Interesting Game But..Its so Hard to get diamonds… cuz.. if you dont have diamonds u cant upgrade ur char…. its prty unfair becuz.. if u finish the first one… of the challenge… the enemy is more stronger than ur char… and this.. why the items dont be permanent? And its so expensive to upgrade eventhou you have 1000 diamond in the first game…. please make some ways how to get a diamond in the game.. not just installing other apps so that you can get free diamond.. make some events…

javan anaru January 8, 2016
Really good game,kind of hard to get resources.Can yous please fix the bonus? Ive played over seven games of it and the top bonus ive gotten is x2 so its not really worth 100 gems/points

Robbie Ham January 10, 2015
Updated review: At lv21 and higher the enemies out damage your army’s damage (I have them all updated). How are you supposed to defeat that level if the opponent pretty much 1 hit KO your little army? Please fix the in game unbalance.

Arjie Enriquez May 16, 2015
Thanks for the game my strategies skill of myself is getting better and better i hope that is not a bug in this when i get higher and higher if it does i will report to you and please fix it ok? this game is my first game on android hehe and it makes me happy about this game hehe… keep a good work game creator (*^__^*)

Jesse Clark December 7, 2015
The game is excellent. It’s a side-scrolling “a million of my guys vs a million of your guys” clusterbomb of action. The artwork, animation and menu design is excellent and I think the menu screen music is one of my favorites. But there’s a problem, and that problem is DIAMONDS. I hate diamonds. Sure, you get SOME, but never enough. You want to keep upgrading? Buy diamonds. Want them for free? Download a bunch of other apps or sign up for a website. It’s annoying and wastes time. But the game is still fun.

Sam Williams February 18, 2015
Since customization seems to be an in thing right now, I would suggest that you guys put in a customizable unit and/or hero. Skin color, gender, health, weapons, armor, the likes. I think that would be pretty cool. I think you guys should also add a competitive feature of some sort. This would definitely attract a few more fans of the series.

Stillno Ttellingyou April 24, 2016
The only negative for me is the audio during combat. The overlapping of the same attack audio when you’re taking down the enemy base. There’s a lack of variety when it comes to the sound effects. But the gameplay itself is cute and fun! Easily overlooks the sound issues. Just mute the game and play some music with your phone’s music player app. Problem solved.

patrick jeffery November 6, 2015
Good game, I like these type of app games. However I have tried to get the free gems by downloading and playing other apps. I have done it properly downloaded and played the app, created an account with the game it asks you to install and run but no rewards. Very annoying when you can’t afford to spend but put the time in.

Gloryleigh Salcedo February 16, 2015
I remember this back in highschool.. Memories, i still like, but its a bit sad that every battle just gave only 24 diamonds, thats a waste.

Isaiah Jack June 12, 2015
Please make more characters and make more diamonds come after each round.also allow us to either be cats or dogs and have an evolution for dogs into wolves and cats into lions or tigers please. I see you haven’t listened to me

Joshua Mickel September 10, 2015
It is really good for the lack of this type of game but being a pc player I can’t say it’s great compared to unlimited flash games…. Its slow to make money on it and winning lvls is slow to reward

Alex Morton September 7, 2016
Pretty simple, fairly boring as far as mechanics go but it does what it does nicely. I am more worried about the diamond to difficulty scaling and how that effects the game by forcing you to have certain diamond requirements to progress.

Bill Dennis November 2, 2015
I wish you got more diamonds for finishing levels. I find myself downloading a bunch of other apps I don’t want just to get diamonds to upgrade. Other than that, it would be 5 stars

Holly Pennington February 8, 2015
Great graphics and gameplay, a little slow coming from a personal opinion to encourage players to purchase extra upgrades using real money. For a dedicated player but people are likely to give up quickly.

Sally Wong June 12, 2015
First you need at least unlock Tempus and above and have Hero Skadi.Then keep playing for level 1.When game start, no need to wait for fish, just let out all yours soldier and together with Skadi, use Skadi skill when they are going to attack dog castle.You can finish this game in one minutes time or even lesser (if your soldier are strong) and get 15 diamond for each game. You can earn up too 100 diamond within eight minutes with this way.(Buy 2xgame speed if you want to earn more faster.)

Denny Kurniadi February 12, 2017
Without the hero, sometimes the allies unit can be easily beaten by the enemy unit unless we upgrade it. The diamond reward were small

Prie Mahendra June 24, 2015
Would be a lot better if you did something to mix it up a bit. The bonus game is all im playing for atm. Overall a decent game though, with improvement could be a great, addictive game.

Sean Kirkpatrick August 16, 2015
The game excelled at strategy and defense. You could get your resources up or start strong! Maybe an improvement would be adding more units with a ‘limitation’.

Binh La July 24, 2015
Everything is great but with the bonus games, when I click bet, it freezes and I have to restart the game and I dont get the diamonds AND i lose my bonus points. Other than that, it’s a fun game

LpsStar January 14, 2016
Its amazing! Cats that can fight along with awesome heros & abilities! Plus can you make us add multiple heros at one time? It would be cool and easier! Plus please make more levels!

Chase Sandman October 28, 2016
The little animals spirit flying away, I feel so bad for that. I know, it’s ridiculous, but it’s me. Haha

Kat Winegard June 12, 2017
While its cute, i feel like its largely pay to win…diamonds are not plentiful and they are the only way to upgrade your current units or buy new heroes. So unless you want to purchase diamonds to use in-game, it gets ridiculously difficult very quick.Otherwise, its a cute time-killer.

Deeyond Ajah October 28, 2015
Quite different from catwar 2, but it’s ok. The free gems sometimes doesn’t work although i had finish the task or win the game..which is kinda sucks.

Josh Fielder June 29, 2015
The diamonds being used to upgrade units seems like it’s going to be a bad idea, don’t get very many while troop upgrade cost only increases

Truong Nguyen August 5, 2015
Game is fun but u need to do alot of the free gems offers to get pass the hump its almost impossible to win unless you get free gems or replay the same lvl 100x each

Tommy Reinaldo Kurniawan December 30, 2014
2x speed is paid.. and you have to keep clicking the cat spawn. Gets boring in a while

weverly william September 24, 2016
Need to add troops.. hero.. if can also may add special abilities spell or somethin that dont cost gem.. and it will be interesting.. 4 star for now

Yulgar Bansag May 29, 2015
I like the game so far. It was a challenge for me to earn more diamonds cause it’ll take more time than what I expected. I would love it more if: The developer could add Daily Bonuses just like the other Cat War App and the heroes will say something before they cast their God Skill. It’ll be cool if they add that cause they’ve done a great job on the heroes names and everything! Go further for the developments of the Apps of the Creator. ?

Ded Wynde October 28, 2015
But its designed soley to eat your money. Grinding levels with such miniscule rewards is futile with the costs for upgrades and new units.

ErRor SaNs May 9, 2016
I played this game before. Cat war 1. Now theres Cat war 2. Perfect for me cause I love cats and I hate dogs.And if ur stuck in a lvl. Upgrade. Urcats

Fiery Duque September 28, 2015
The graphics and the heroes name are super duper lame cat war2 is better than this i know you can make this game a better game like no other

Sami Emery July 5, 2015
Its a bit more detailed than the first cat wars and is a lot easier getting items and such. I love how there’s more heroes~ keep up the good work~

† єggiє. † September 6, 2015
Me and my older brother used to play the first game together all the time. When I showed my brother this he kinda freaked >. < lol

Andrew Varilla October 26, 2015
Fun and simple. The diamond grind and level scaling of the enemies is a bit skewed against the player, but a little challenge never hurt anyone, right?

Stephen Weiler October 7, 2015
At first the game was quite repetitive, and slightly annoying. But later it got better. I’m just doing this for the reward ;D

☆☆☆ 1 Million Downloads Event! ☆☆☆
– Get lots of diamonds from bonus game.
– 3x bonus game reward points (3/17 ~ 3/24)
The war of cute cats and dogs…
The scattered cat heroes gathered to protect their kingdom and fight against the dogs.
★ I’m the god of cats, ‘Catphinx.’
You can control the cats and the heroes that have a special ability.
★ Dynamic defense game
Upgraded from ‘Cat War 1’ and developed by WESTRIVER
★ Simple control and various contents
A Line based war game that gathers resources and dispatch cats to destroy the enemy.
Added various heroes and bonus games.
[Scenario]The commonly loved animals of mankind, cats and dogs…
Long time ago, even before the human race was appeared, cats and dogs were civilized creatures.
The kingdom of cats were always overpowered by the kingdom of dogs, and even the kittens were taken to the dogs.
The kingdom of cats that lost their kittens could find them back with Catphinx’s help.
Because Catphinx was involved in the matters on the earth without having discussed with other gods, Catphinx was rebuked.
In the meantime, the dogs began to invade the kingdom of cats.
The scattered cat heroes gathered to protect their kingdom, and the huge war began…