Can you name 189 animals? You will be able to after completing this fun game! 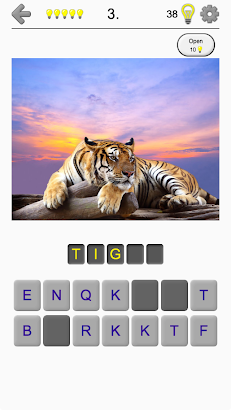 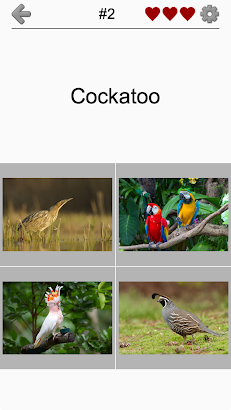 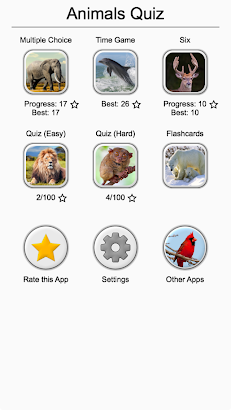 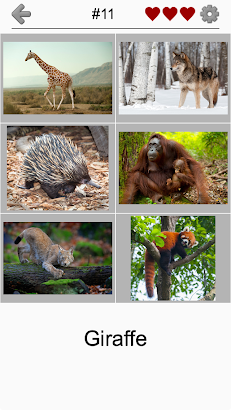 In this application, you will find 100 pictures of famous mammals and 89 photos of birds from all over the world. Both wild animals and domestic animals. The whole zoo! Can you guess them all?
All animals are divided into two corresponding levels:
1. Mammals: African rhinoceros and hippopotamus, Australian echidna and platypus. Is it a jaguar or a leopard? Try to guess today!
2. Birds: small American robin and giant ostrich from Africa, flamingo and emu from Australia, even penguins from Antarctica!

Five game modes provide entertaining experience for everybody:
* Spelling quizzes (easy and hard).
* Multiple-choice questions (with 4 or 6 answer options).
* Time game (give as many answers as you can in 1 minute).
A learning tool:
* Flashcards (browse through all animals without guessing).

The app is translated into 18 languages, including English, German, Spanish and many others. If you wish, you can test your knowledge of animals names in any of them.

Become an expert in zoology! Make your first step into ornithology!

– Birds!
– Czech translation. Now the app is translated into 18 languages, including English, Spanish, and many other.

SANGITA SINGH October 20, 2017
I like this game very much

Khoda Kara October 17, 2017
good for pass the time and learn names of different birds and mammals

Maria Kallfelz September 18, 2017
I did learn a few more animals that I was not that familiar with.I liked that it was mammals. If you decide to create a reptiles quiz please keep it separate. It’sfun to try and beat yourself and it’s not always easy!

Paul Winstone June 2, 2017
A quiz mostly for kids, but well enough programmed. About half​ dozen were more challenging for an animal lover like myself but still easy. Probably more mammal than animal quiz as I don’t think a single amphibian or reptile appears in it.

UnknownFebruary 27, 2017
I loved it and it’s kinda hard once you start getting used to it and it’s cool so see how you like it and if you like the game keep it!!??????

UnknownApril 1, 2017
I love it because it so fun and we learn a couple of think at the same time ??

Winnie F July 12, 2017
I love this game. I just realized I know allot of animal names and I learned so much more new animals. Pretty fun!

UnknownJune 2, 2017
Way to easy for me. Good for those who are unfamiliar with animals.

UnknownAugust 20, 2017
I like this game because it is very useful for me

UnknownDecember 27, 2016
It was fun at first but after a while you get bored with the same animals over and over again?

BIG Bossky December 18, 2016
Andrey Solovyev, I love multiple games of yours! Fun, beautiful, educational, and I love I can play offline. Great work!

Axl Reybert Sangalang April 2, 2017
THIS GAME IS NOT BORING WHILE SOLVING

Teawa Tatireta January 10, 2017
This game is so cool and awesome

Ashutosh Sharma May 31, 2017
It has too easy questions …but i need hard ones.