Will Ukraine become a prosperous country, if you become its President?

I wish you could place your troops on the maps and move them across the country and you could pass out funds to the state governors.u should be able to pick the country u want to play with,can u please stop the screen from moving up and down while I play. 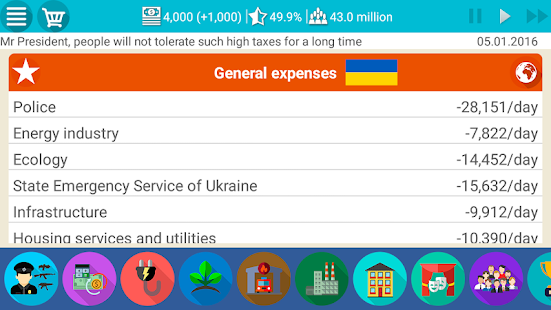 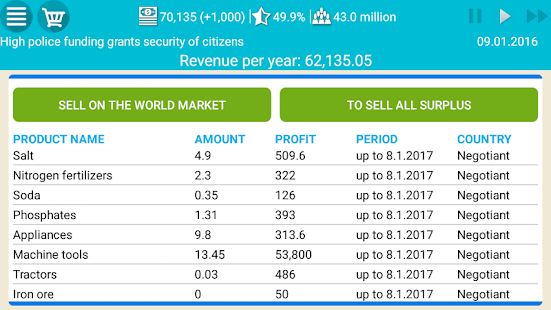 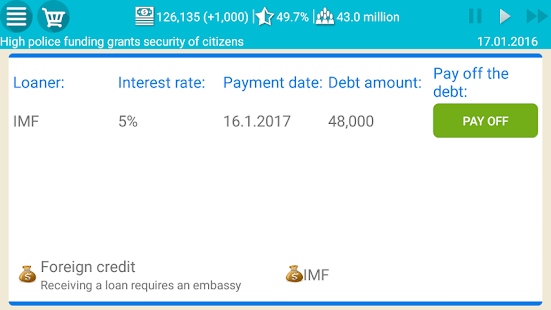 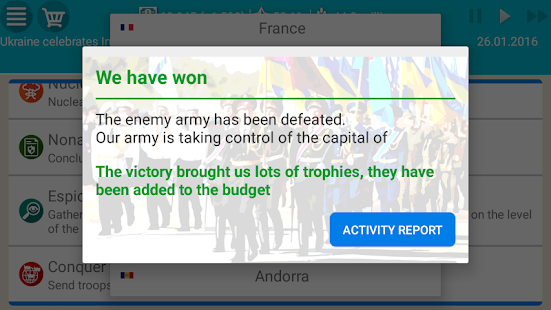 GAMERS GUIDE TO GAMES gamer February 1, 2017
I wish you could place your troops on the maps and move them across the country and you could pass out funds to the state governors.u should be able to pick the country u want to play with,can u please stop the screen from moving up and down while I play.

Developer Oxiwyle December 18, 2016 Thank you for your feedback. We will think about your idea

Dimitrije Kostic January 21, 2017
Not too hard if you spend some time with it and if u have brain

John Jay April 20, 2017
Is it just me, or is the population bugged? I did everything I could but it continues to collapse over and over again.

shittu yinka September 26, 2017
Can you create Nigeria version of this game. We have one of the most complex political system in the work. And also create a platform where president can address it’s citizens

Kill Me August 12, 2017
It’s just too hard… I just don’t know how to play… Needs a better more detailed​ tutorial!

Mark Gaming January 10, 2017
The game is great but it’s too hard and countries randomly declare war on you

Developer Oxiwyle August 18, 2017 The game makes you think. You can do this!

Aymen Araari December 29, 2016
popularity decreases too fast, is it the same system used in the usa simulator game? if not then pls use the usa popularity system

Martin Garcia November 23, 2016
Your frequent updates are great and im having fun with the game. Tho some features would seal the deal.Manual saving, showing details in lose/win defence. The military productions should get a buff since they are so cheap and hard to make. And military productions should have option to go to national guard/military stockpile, or be exported.My best record was at 90k income with average lvl4 budget for everything, in all departments

Teruna eka ravani November 30, 2016
Why after i buy 4 in 1 and restart the game. Nothing happen. Please refund my account.

Developer Oxiwyle August 18, 2017 Thanks for your feedback. We will try to fix the errors.

Steven A. Recarte November 7, 2016
It’s too good to uninstall it but too difficult to play, you earn almost none

Developer Oxiwyle August 18, 2017 The game makes you think. You can do this!

kazz 13 September 26, 2016
Done very well. The reason its nota 5 is becuase they keep complaining about taxes and if you lower sport funding to put it into something more important the population gets more unhappy than happy. Im sure if there was a crisis in the US and obama cut a bit of funding for sport and put it into things like health care and rescue and all this im sure sport fans would understand and the population would love him for that. Needs these 2 things fixed and a 100% 5 star from me

bashar abubakar October 13, 2016
A very good game but the developer need to change the strategy of the support or popularity it keeps on going down and you can’t increase it, but the game is one of the best I have ever play on mobile. Good job but we need and update please in a week time.

k k September 25, 2016
Despite taking out a loan i still cant pay for anything theres no point taking out a loan and adding it to revenue per day if your not going to put the revenue. Into the budget, also the popularity levl is unrealistic

Developer Oxiwyle August 18, 2017 Thanks for your feedback. Try a new game tactics.

Christian Marr November 3, 2016
Bro,can you please give me all the tips you can give bcause it is so hard to play because of the popularity or make an update that makes it easier…oxywile.pls reply back as soon as possible

Kevin Swearingin September 24, 2016
I think this is a good game because it is challenging and takes a while to complete. It is well designed to where not everything will help you out but you have to make the best decision to win.Good job

miguel3k8 November 4, 2016
I purchased the 4in1 pack and it didn’t give me it and yes i did restart and i cant even get a refund

October 24, 2016
I love this game,,, please there should be a way to recover looted money from the mayors of the town through the ministry of justice ,,am always seeing the update in the game news,,, I will keep checking for your update,,, well done

BRYCE 1 November 26, 2016
This game is good but it would be better if you make a United Kingdom version. And please can it be be the hole map.and have boarder controll

Developer Oxiwyle December 28, 2016 We are working on it

Branimir Jovanović September 26, 2016
But it would be great if we could simply insert amount for number of employes or buildings to be built since it would be simpler

Tadas Mineikis October 2, 2016
Nice game, but sometimes you get no money from trade super annoying bug

Thomas Simeon October 9, 2016
Is more and realistic update but this are the best games yet please dont stop keep updating and adding more countries love your games

Ronald Rice October 3, 2016
You said it would be out in September.

Developer Oxiwyle October 3, 2016 We are working on it

Angelo Pinto November 5, 2016
How do I increase my ratings?

Raf Maits September 18, 2016
I suggest that the dev should consider adding data input for adding number on employees rather than an increment button, its really frustrating clicking add button for just 100 increment or any.. you must include inputimg desired additional increment for employees and others

David Gultom September 2, 2016
This game is great and all but I just seems impossible to get a high popularity. I already built lots if factories and got all of my taxes to 0 but the populairity meter is still going down. I liked the first one better. Also can you make like a button to change our current budget to our revenue per day. Maybe every 100 or 1000 budget is 1 revenue or something so that we actually have a steady income because I always have like a ton of money but my income is only 1

sanjurana990 sanju September 12, 2016
The game is good but to hard to raise income and popularity. People are always unhappy they keep complaining about tax and there is no way to win untill we pay and play

Developer Oxiwyle August 17, 2017 Thanks for your feedback. Try a new game tactics.

Anton S August 19, 2016
Seems to be a good game, but it is almost impossible to maintain good popularity level and very hard to increase budget income. I like many new introductions, such as developed industry options, but still the first game was easier….

Reginald Edgar August 23, 2016
Please add more country and fitur please ? i hope in future i can play it with more many country