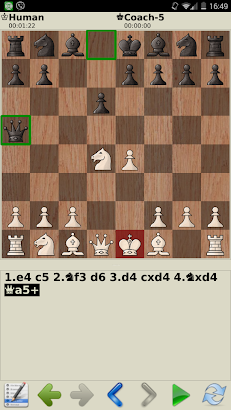 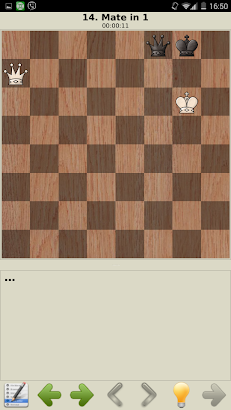 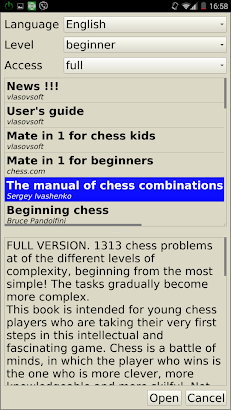 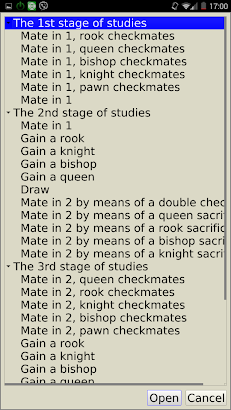 IMPORTANT:
1. PLEASE, WATCH DEMO VIDEO FIRST
2. TO REGISTER THIS PROGRAM YOU CAN CLICK THE “BUY” BUTTON OF THE NAG SCREEN
3. IF YOU CAN’T BUY THIS PROGRAM VIA GOOGLE PLAY, YOU CAN FIND MORE PAYMENT OPTIONS AT MY SITE (http://pbchess.vlasovsoft.net/en/register.html).

We have a lot of chess training materials ( tactics, endings, classic games ) for “chess – tactics and strategy” at our site:

(*) This is demo version of pbchess program.
Limitations:
1. Displays registration messages
2. Can open only demo training databases. The registered version can open all the training bases.
3. All the opening books are limited to the 3 first moves.

You should register to get rid of these limitations.

Nikolay Kuhta March 4, 2017
I think – taking into accounts all available options – it is one of the best chess plays

Scoopy Rat November 23, 2016
Went to setting and unticked two boxes and now useless as cannot get back to menu options or game keys.uninstall,clear cache etc, reinstall and problem persists.Else would be a decent app.

Developer vlasovsoft November 24, 2016 Hi! To show menu you can also tap on the header area. If you’ve also disabled the header area then delete SD/.pbchess/pbchess.ini file.

Pradeep Jain B.P October 18, 2016
Even after paying I am not able to navigate to all the problems.Menu settings registration is also not visible..Does this not work in Android

Developer vlasovsoft October 19, 2016 Hi, Pradeep. Please contact me by skype or email. My skype is sergeyvl1979

Warren Johnson October 8, 2016
I can not understand how this app works.

Developer vlasovsoft October 9, 2016 Warren, please contact me if you have questions

Chance Zunick May 6, 2016
Six dollars is totally worth the content and extras you get.

Priya Muchandikar November 8, 2016
Dont use it

Developer vlasovsoft November 8, 2016 Priya, screen resolution 240×320 is to small for my program. Sorry.

john mcnamara April 10, 2016
I have used this training program for six months and I put it on my phone too because you get an extra registration for free. I spend hours on this program every day. It has a gigantic database of chess puzzles.

Developer vlasovsoft January 15, 2016 Hi, Ashish! Thanks for reporting. Stockfish chess engine will be updated to version 7 in the next version. You can change the board size and pieces youself. Please contact me via email or skype if you have questions. I’ll support you and answer your questions.

frankjhall1 December 17, 2015
Had a problem. Was helped to fix, quickly. Happy. 4 stars for now till I proceed further. Most likly to purchase. Its good stuff. Able to use on line as well (pc). Like that fact. Most likely a five star app. FIVE STAR PURCHASED! One purchase. Have on phone and PC

Chris Nastri October 20, 2015
Confusing interface and menu and buttons are too small, but once you get past the strange but helpful tutorial, and pay more than you’d think,it is the pretty much best thing that ever happened to chess. Totally worth it!

Developer vlasovsoft October 20, 2015 Thanks, Chris! Please contact me if you have any question.

Marcel Bro January 21, 2016
The app is just a PC program converted to an Android app but not optimised very much. I find the UI unpleasant and confusing.

Kirill Oseledets November 22, 2015
One great feature which is currently missing in all chess programs on Android platform – is comparing your move to a model game in centipawns ( similar to Lucas chess). You can compare your performance to great chess players or to players of certain rating.

Developer vlasovsoft January 12, 2016 Sorry, dont understand you. Are you afraid of many buttons?

Robert Schmidt-Cisternas September 28, 2015
Love the new online tactics!The non standard UI is fairly distracting, however, and gets in the way of a perfect experience. Copy & paste of text only possible with e.g. Hacker’s Keyboard.

Tom Boshoff September 22, 2015
Pro’s: This app has a lot of free features, more than any other free chess app, which is why I use it. Books, puzzles, computer analysis, set-up-position,multiple engines, and more all built in free. The developer is helpful and responds very quickly to your problems.Cons:The side effect of lots of features is a complex (hard to learn) GUI and some bugs. A few of the puzzle solutions are not correct (according to the app’s own computer analysis). The puzzle rating system doesn’t work well, your rating increases by 8 points regardless of the difficulty of the puzzle, or time it takes to solve.In short, this app has a lot of potential. Keep the updates coming!

Developer vlasovsoft September 22, 2015 Tom, please contact me. I’m sure we can solve your problem. One reason can be: there is a slider between board and notation. It allows to change board and notation size and to hide board and notation. About problems. Of cause I can’t check them all. But I plan to implement user feedback and fix “bad” problems that users are reported.

Alexander Poleshuk July 25, 2015
Online tactics – how can I use it? Please add some information

Developer vlasovsoft July 26, 2015 Alexander,
(1) I’ve wrote a small description in our “User’s guide”. Please download the latest version: MENU-Online-Books – User’s guide
(2) You can always see your tactical results here: http://pbchess.vlasovsoft.net/tactics/stats.php
(3) You can read project news: MENU-Online-Books – News!
(4) And of cause email me your questions

Paul Uhlig August 4, 2015
Great chess training app… has enough resources to be of great help to chess students and their coaches!!

UnknownAugust 9, 2015
This app has a simple and fun way to teach chess.

CGI School July 18, 2015
Thanks for the quick support. It is a great app for any chess lovers. I recommend purchasing it as it is surely well worth it.

Craig Kroon Van Diest June 3, 2015
Tried to use this game to learn chess moves. Who ever wrote the system for this gamejust made using it so ridiculous use, myself and four others I gave it to to try gave up also. The chess instructions are good the game systems STINKS.

Developer vlasovsoft June 4, 2015 Another useless review… It tells nothing about why you don’t like this program. Better aproach is to write what you don’t like and I try to fix it.

John Millett April 21, 2015
For a mere $6 you get hundreds of dollars worth of classic tactics books, classic mating patterns, and annotated games, including the recent WC matches

Jason Liu May 20, 2015
So many books. if it allows to do the solved puzzle again, it will be better.

Jason Mikhaels May 1, 2015
Statistic Part is GREAT for beginner

Igor Fedorin March 7, 2015
Really nice app, with one open question. Can you transfer a license if your changed a phone or you need to pay again?

Robert Rowan March 6, 2015
Easy to use, with great features and many annotated games and tactic and mating puzzles. The $6 is worth every cent!

Dmitry Paferov February 25, 2015
Huge amount of education materialsfor every level of players, I can’t imaging what I can wish more.

Subhro Dey Sarkar November 21, 2014
The demo base of annotated games does not display annotation but only the moves

Developer vlasovsoft November 21, 2014 Thanks for reporting this. I’ll fix this issue.