The ugliest game ever played in my life 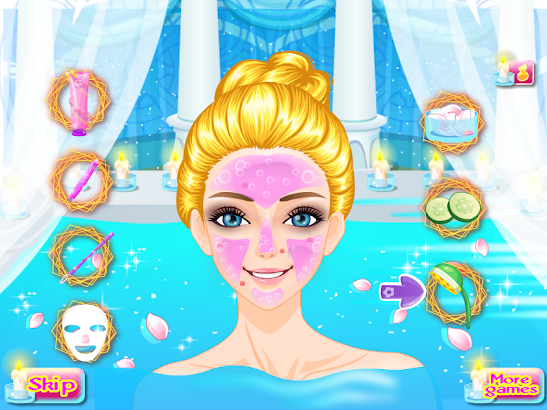 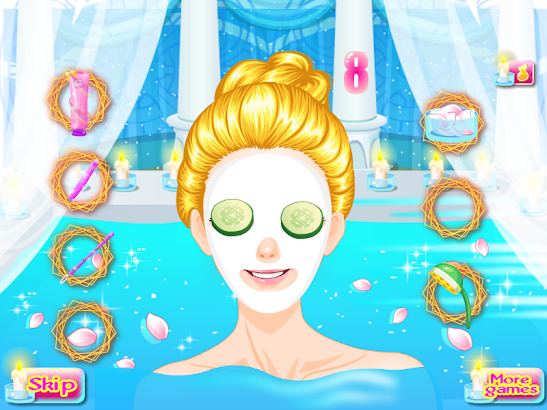 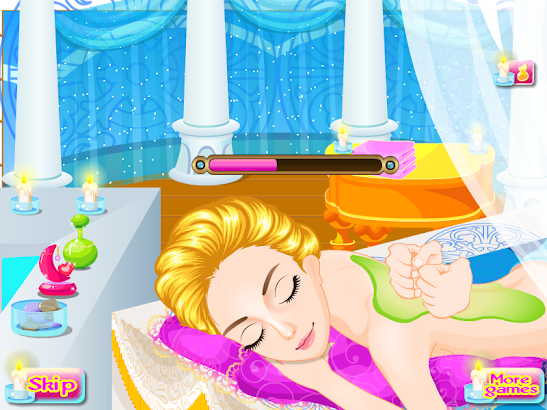 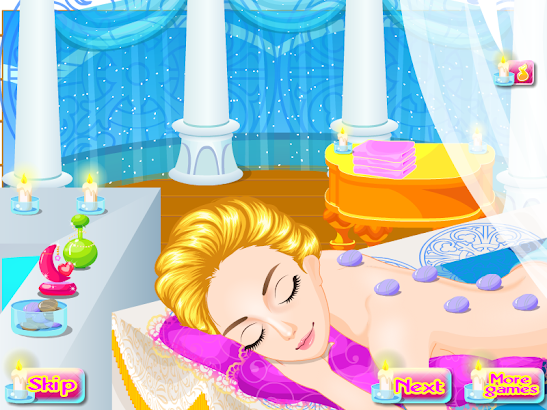 Hi, is great joy in the kingdom of a great king. The King reigns for a long time and is loved by all his subjects. King has a beautiful family, the two daughters are the greatest treasures oh him. Today we give a big party in honor of King and the eldest daughter failed to prepare for it because she was responsible for organizing party. She needs a girl who can become friends and who can help her in a short time. Do you want to help her through this makeover game for girls? If yes then you should know that our salon is yours today, you will work full time and your first client will be Princess Anais. She is sure that you will be able to help her and she is waiting to see the outcome.
Success!

1) At the beginning of the princesses game you encounter the beautiful princess;
2) She will tell you what problems she has and you will have to help her with all you can;
3) You have to start with a special facial treatment, apply an exfoliating gel to clean to dirt, apply a mask of plants that help her skin to look healthier, cream of green tea will help the girl to be brighter and finally apply a cream that will make dark circles disappear;
4) Remove spots and acne with a device;
5) Clip the eyebrows;
6) On the skin of the eye area you must place slices of fruits and vegetables to regenerate skin in the eye area;
7) The most fun is when you can choose the type of makeup, you can choose any color you like. You have to apply: contact lenses, mascara, lipstick, eyebrow pencil to outline, eye shadow and powder cheek;
8) To be the prettiest girl at the party will be present to help her choose the best dress and accessories the brightest;

Thank you for your help, the princess is very pretty and certainly she will meet the chosen one today at this party. You can return to help her through this makeup game with princesses.

Thank you for choosing this game and invite you to choose and other girls games and games for girls to put your skills to the test.

UnknownFebruary 28, 2017
The ugliest game ever played in my life

Lakshmi Narayana Reddy Reddy August 25, 2017
Whati have to do after clicking on show button

Bailey Kenyon March 18, 2016
I loved it because you can give the barbe a spa then dress it up.

Brianna Perez April 30, 2016
I like it but I rater a eyebrow spa game that is awesome

Adia Chandler November 25, 2015
Its ok but could use some good work at the end but other than that its cool

Gene Parker September 3, 2015
You know some of the games they got are really cool

Usha S August 6, 2015
Pretty cool, and I am very happy that I have downloaded it.

Isabelle Deeley-Tham May 6, 2015
Like it but the dresses are short.?

Adenike Yekini July 23, 2015
I love it but princess is kind of ugly

Rajendra Prasad March 23, 2015
It is a very interesting game

Annika James February 25, 2015
This app is fun, but it does not have a very big varioty.Your basically doing the same thing over and over and over.☺??

Lupita Vazquez March 1, 2015
This game is amazing i love it
Tags
Ozone Development