Unleash the fury! Dominate your foes in an epic, dark fantasy hack and slash RPG

Great game I love it 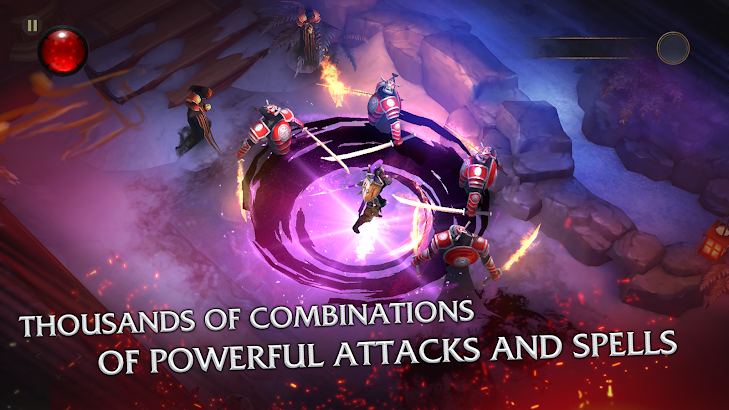 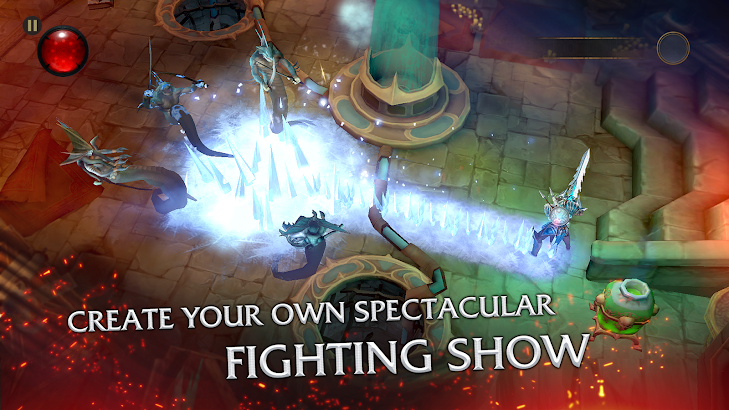 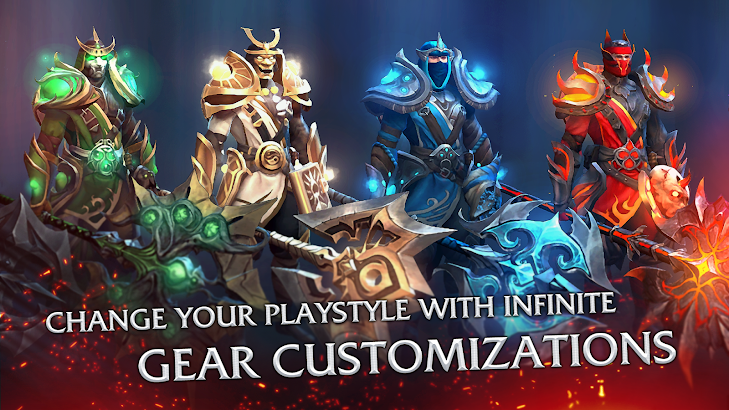 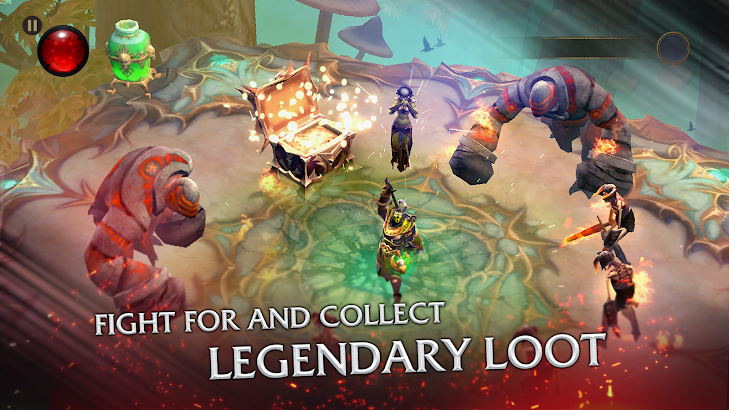 ★ Bladebound requires Android 4.2.2 or higher and the minimum of 2GB RAM. Internet connection is necessary. The game also requires about 0.9GB of free disk space. ★

Darkness has come all over the kingdom of Ezura. The merciless Betrayer shattered the last men and started a strong-arm régime. You, the last of the Bladebound, are the only hope for bringing back the light and becoming a hero. Embark on the final battle with the mysterious Sentinel and defeat the evil once and for all!

Bladebound is a dark and dynamic action-RPG with a spectacular battle style, hundreds of fastidious opponents and console-quality graphics. Join thousands of players who fight together to save the Shattered Lands!

CREATE YOUR OWN STYLE
✓ combine the powers of all six elements to create a unique battle style
✓ use the deadly skills of over 500 different swords and armor
✓ gather, fuse and expand your equipment to defeat the toughest bosses

HUNT RUTHLESS OPPONENTS
✓ find your tactics to hunt down the Impaler, Queen of Thorns and many others
✓ explore the dungeons on 3 difficulty levels – from normal to heroic
✓ practice your skill at the Arena and in many other modes
✓ unique monsters waiting in the dark dungeons for your sword

J. C September 23, 2017
Enter code: VQ8DDD46 under options at top right and we both get free friend loot.If you are someone who loves hack and slash games this is the one for you. Lots of free loots so far, beautiful graphics and lots of skills combos from items to play with. Don’t have to pay to advance, daily free gems, free gems from advancing in the game and upgrade is easy from arena drops. New update: added lots of items, added more ads too and it can get laggy if you have a low ram phone.

Pavel Georgiev September 30, 2017
Ok game. Pay to play. After a few hours i hit a wall where i cannot progress – level 10. No way to get cool weapons without paying – the reward for level 10 heroic is just a 3 star weapon…. If you want legendary weapon you need to buy gems. I have never played a game where i literally have no idea how to move forward after just a few hours of game play…….

*HeaDKRacKeR * October 3, 2017
Uninstalled.. After you do like 15 stages and use up your initial starters energy.. You can do like 2 stages per day then your out of energy to play anything then they want you to pay for it with cash… Lol..Way to expensive for stuff especially cash paying players I’d rather just buy the full Xbox one version… Diablo.. However it is fun and has great graphics and gameplay.. Just super pricey

Kace Mcelfresh October 6, 2017
Very awesome game… but with that said the major thing holding it back in a big way is the money system.. come’on!!! Easily one of the best hack and slash’s for mobile rivaling Diablo itself its a shame to see this game sink because of n

Tiberiu Benyi September 24, 2017
It is a great game,it doesn’t drain my battery and is really fun. BUT the energy system is killing me I want to play the game as much as I can please find a way to get money from other things in the game. Let me watch damn adds for the energy…i ca-n PLAY this games for hours on end

A I September 7, 2017
New update broke the game for me. FPS drops to like 10 because of the forced “Store-One Time Deal” pop up. I understand at the start of the game but not after every mission. Fix it please.

Not Kari September 18, 2017
Wow so much has change from the first time month release, control change and polish is top notch, maybe some stereotype classes and endless end game content on the future also continuous update like path of exile, ill definitely buying the specials, worth ? best rpg together with dh, dq, and eternium, thanks Devs, needs more support thou only 100k players atm, more power!

Becka Jordan September 9, 2017
Thought i would give this a try and really disappointed that it seems like there is no choice of chatacter classes or at the very very least a female avataras well as male.

Ryan Hammond September 28, 2017
I was really reluctant to play this a few days ago and it very glad I have finally, can not put down this game ? my friend code is: 62ZRQL5V

Alexandre Giaccheri September 17, 2017
It has potential, but it crashes way too much when loading, and I’m on a 2gb ram device. Not really enjoyable at the current state.

Steve Baek October 4, 2017
No doubt Artifex Mundi is the best game company.All of the games they made are really excellent. Hey guys, you had better try their games. Trust me. You will like them.

Developer Artifex Mundi September 6, 2017 If something isn’t working correctly you can contact me at [email protected] ? / Gabi

ryan esg October 22, 2017
This the game engine evry maker shud follow . it doesnt need to get close to an enemy it just attk wen he sees it hehe but no evasive manuever cud have been awesome but nvrthless its a great awesome game i hope there a batusai character samurai hehe

Rick Boon September 8, 2017
Energy system ruins the game totally.Why are there still games who LIMIT their own play time?!

Calin Fekete September 20, 2017
absolutely wonderful, i’ve been searching for so long for a game that has such smooth combat, and good looking graphics. Really well done. Good job.

UnknownOctober 11, 2017
overall game is awesome…only drawback is it doesn’t have real time PVP or guild system…..it have got awesome graphics and cool story line…am loving it…amd here is my referral code…6J9K80ZV…use it..u will get 50gems and i will get 25gems…

Logan Merriam September 29, 2017
Intro screen says “tap to start” but doesn’t respond to touch, no matter how many times I kill and restart the app.

Annzson The great September 11, 2017
Reminds me of dungeon hunter much more refined and less money hungry! 10 out of 10 instant classic!

Aldin Rekic September 29, 2017
Why is it not reloading my energy I have perfect internet connection but does not reload energy and I can not continue to play I am on 3k rank really high I would like to continue playing please Samung S8+

Rennell Raro September 24, 2017
i really love the game… thank you for this one… but i have finished the stages and waiting for stage 7

Boy Alfaira3 September 18, 2017
So far this the best hack and slash game. Very addictive with stunning graphic. BTW enter my refferal code V43DKK86 for getting 50gems,

Garrett Voss September 7, 2017
This is the game I’ve been looking for. By far THE BEST game I’ve played on the phone.

Andrew Bennett October 21, 2017
Dungeon atmosphere and everything is really well done! Good Diablo lite game (which is what you want in a mobile ARPG) but I need to debunk some of these other reviewers.Yes, everytime after you go to the home screen the game prompts you to buy stuff. You get used to it, plus other apps do that; so let’s not pretend this is the only one to shove payment stuff in your face.Can’t level passed 10? What? That makes no sense at all. I went from 7 to 21 in the same day so that’s just an idiot who doesn’t know how to grind…in an rpg…wow…Paywalls? Ummmm, where? There’s no steep climb in difficulty and if there is, then GRIND YOUR LEVEL UP! My gear hasn’t changed, only my level, and there’s a huge difference in my power.Energy issues? Well…kind of. Every few level ups your max energy increases and every level up it refills. However, later stages use more energy. But again, since when is this the first app to use energy? Also keep in mind that it’s an APP! Go do something else while your energy refills. Play a console/pc game, workout, hang out with people, spend time with your significant other, play other apps! I like draining my energy and then knowing that this game is off limits. If every app I play had unlimited energy, I’d only be playing one or two of them.If you’re a prissy little “gamer” that nitpicks a free app and complains that not enough stuff is free, then this isn’t for you. This is the kind of app designed for people who actually have lives and not much downtime.

Developer Artifex Mundi October 23, 2017 Adrew, thank you so much for such kind words, we’re truly grateful! ? Remember to follow us on facebook to stay up to date: https://www.facebook.com/bladeboundgame/ Cheers! / Gabi

Afsan Ul Hauqe Sanim October 6, 2017
This is the best RPG I’ve ever played.But the game can be repetitive for free-to-play players.

Matthew Alleyne September 11, 2017
The best hack and slash game I played so far great work guys luv the game keep it up

michael pollie October 7, 2017
This game is pretty awesome. I would give it 5 stars if it had controller support

Developer Artifex Mundi January 13, 2017 Yeah – the game is online, as your save is kept in the cloud, also – to see the equipment of other players and check the Arena score, internet is necessarcy ? / Gabi

chetan Bambal October 1, 2017
This is an awesome game..none game has playstore like this yet…