I keep losing my games. I was on 244 then you started me back at one. I got to 125 games lost starting again at one.I love bubble witch 2 but I’m out of patients. I even filled out that part about saving games no matter what!!!!! Wrong!!!! 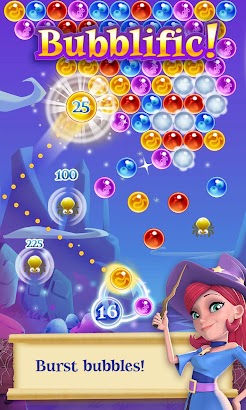 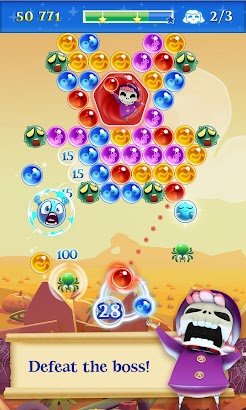 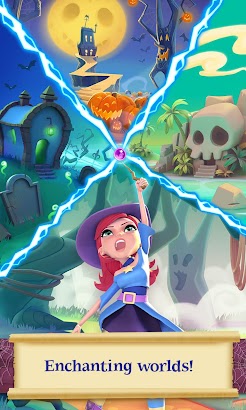 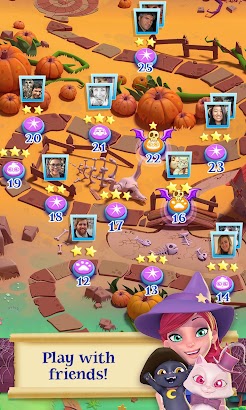 Stella and her cats need your help to fend off the dark spirits that are plaguing their land. Travel the realm bursting as many bubbles as you can in this exciting bubble shooting puzzle adventure. Win levels and free Witch Country piece by piece. Play this epic saga alone or with friends to see who can get the highest score!

Bubble Witch 2 Saga is completely free to play but some optional in-game items will require payment.

By downloading this game you are agreeing to our terms of service; http://about.king.com/consumer-terms/terms

Bubble Witch 2 Saga features:
• The next exciting instalment to the Bubble Witch franchise
• New and improved game modes
• Enchanting graphics that will leave you spellbound
• Hundreds of magical bubble shooting levels – more added every 2 weeks!
• Easily sync the game between devices when connected  to the Internet
• Leaderboards to watch your friends and competitors!
• Collect stars to unlock special items to help you on your quest
• Special boosters & bubbles to help you pass those tricky levels
• Free & easy to play, challenging to master!
• Available to play on iPhone and iPad devices

Visit https://care.king.com/ or contact us in game by going to Settings > Customer Care if you need help!

There are secrets that should never be told. Especially mine!
But, hey! Who am I to say they can’t be told? This new feature is available to everyone!
Simply tap into the SETTINGS and you’ll access MEMORIES where you’ll learn more about Stella, Nero, Violet and I.
*grumbles*
– Morgana

UnknownOctober 24, 2017
I keep losing my games. I was on 244 then you started me back at one. I got to 125 games lost starting again at one.I love bubble witch 2 but I’m out of patients. I even filled out that part about saving games no matter what!!!!! Wrong!!!!

Keni Widyaningsih October 23, 2017
So frustrated hearing that ugly witch laugh at me when i’m lost

UnknownOctober 23, 2017
I love these Games you all Have. To play. They’re so much Fun

Brenda Kereluk October 24, 2017
It’s ok right now but when they start giving you colors you don’t need it stinks

UnknownOctober 24, 2017
This game is amazing

UnknownOctober 24, 2017
Exciting love to play this game. Pls retrieve my old account for this game thank you

Steven Johnson October 24, 2017
It’s a great game that I have to learn more about

Edward Dyer October 2, 2017
Effingridiculousrip-offuse bonuses and stillscrews you over anyway all about the money$$$$try actually going where you shoot. Stay away from this game unless you just want to waste money they should give you a free jar of Vaseline

Christina Petersen October 3, 2017
The 3rd instalment is better but its a great game. When you finished the game it does take a long time before all the rest of the bubbles land in their space which is a little annoying.

Charles Bigsby October 19, 2017
When I first started playing this game a few years ago I liked the challenge of the different stages then lost my phone that had the game on it. It wasn’t until recently was I able to download this game version and am not disappointed by the performance of enjoyment I attain from the beginning to end. Keep up the challenge of enjoyment that you’re providing

UnknownOctober 3, 2017
I had over 50 stored up! my friends gave them to me and now they are gone and I didn’t use them! I would greatly appreciatefor someone to check on this! Can’t contact to internet! please check and help!!!!!!!!!

Sree Seenu October 2, 2017
In all aspects its best game.But don’tstopto improve this game even better.

UnknownSeptember 26, 2017
In the seven hundred level lags bad can’t play after latest update not starting game over it will be the fifth time please fix

Burouj Aramgaan October 7, 2017
It gets but unfair at times?… Like you’d literally need one colour to win the game… You’ll have 6 shots you’ll be like “I got this?” and guess what this witch would not give you the reqd. one?

Felicia Whitelow September 29, 2017
I will always download this game on any phone. It’s intriguing which makes it so addictive! I could play all day! Thanks Bubble Witch Saga 2 teammates for all the extra lives you give out when you play! Yayyy!

Nina Brown October 16, 2017
Ive been trying to get lives and I AM signed on to fb… friends tell me they are sending it. .yet my lives are empty. ..ugh so frustrating

UnknownOctober 11, 2017
Why didn’t I get the pumpkin head with all the specials I got it on my other phone but not this one the deals on the pumpkin head look very reasonable hope you can fix this then you get five stars

Sheila Smith October 15, 2017
I really enjoy this game some levels are really tough.I keep playing until I find the patterns to complete.It’s great for hand and eye coordination.

Luna Tic October 21, 2017
I just got this game yesterday… At first I really liked it but then I started running into problems… The potions say they last at least half an hour but it only lasted one round. Then I got passed Morgana and the meter went passed the third star but I only got two stars… What a rip off

Lisa Wardzinski October 17, 2017
new update deleted all my lives sent by friends!I had hundreds of lives sent to me and they are all gone!I want them back!