Many beautiful pictures of your favorite Poke Monster in this coloring book.

Super laggy, also it took me a while to figure out that the way to draw was- ya don’t… You press on an empty space and let the app do it for you, kind of annoying… I also wish there were more options. I give 5 stars if you make it optional to have the app fill the spaces for you or ifyou want to draw yourself. *If you do this please reply to me and say that you made it an update. 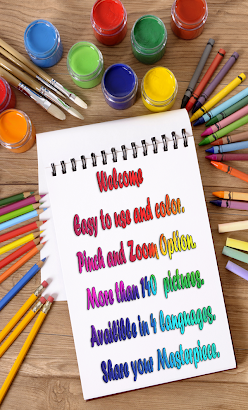 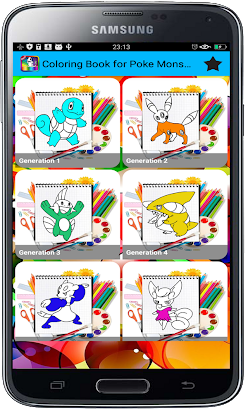 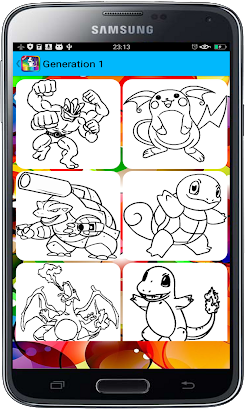 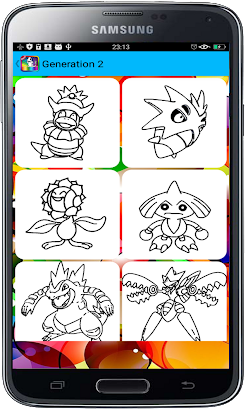 If you or your child likes Pokemon pages to color, this free coloring game is made especially for you with more than 150 beautiful images of the famous Pokemon as Carapuce, Glaceon, Mewtwo, Charmander ….

How to play with Coloring Pages for Pokemonster Fans:

1) Select a category.
2) Choose your favorite Pokemon.
3) Type your favorite color.
4) Start coloring your Pokemonster.
5) Save and share your drawing.

– The zoom option with the fingers to better color the details of the image.
– More than 150 beautiful pictures of Pokemon.
– More than 84 colors.
– Save and share your drawings.
– 100% Free and functional offline.

Download now Coloriage for Pokemonster Fans and please you and your children.

Please leave a comment and give 5 stars if you liked our app.

Aidan Hargis June 12, 2017
Super laggy, also it took me a while to figure out that the way to draw was- ya don’t… You press on an empty space and let the app do it for you, kind of annoying… I also wish there were more options. I give 5 stars if you make it optional to have the app fill the spaces for you or ifyou want to draw yourself. *If you do this please reply to me and say that you made it an update.

jessica mattsen August 15, 2017
Every time I try to share a picture it crashes and my tablet resets. Please get rid of the pony at the bottom of gen 1 thx?

lil Tango August 13, 2017
This game was amazing I just hope that thay add more pokes and get rid of the pony at the bottom of gen 1

UnknownMay 30, 2017
Love the game rate 100/100 good game better then other ones make another and I will be happy plz From Kennedy coulson

Developer ZINA MOBILE APPS May 30, 2017 Thank you very much for your great feedback. Have fun with our other coloring application.

Joseph Wright July 11, 2017
It’s OK but some series do not have all the Pokémon

Zpanda M April 19, 2017
I like it but I cant see them when I’m done with them like in the gallery or on the app

Developer ZINA MOBILE APPS April 20, 2017 To save your masterpiece into the gallery, you have just to click on the arrow on the top. If any other question you can send us a message on [email protected]

UnknownApril 23, 2017
This game is really good But please ad Bulbasaur

Developer ZINA MOBILE APPS April 23, 2017 Thank you for your great feedback. We will try to add your favorite pokemon bulbizar soon.

Nadipalli Prabhakar April 8, 2017
I’m not able to save it in gallery

Gabriella Salinas July 31, 2017
This is horrible when i saved the pictures they where not in my gallery stupid app

Faihan Hussain July 1, 2017
Add Greninja And Mega Charizard Or Many Pictures Are Not Create Right

Annadina Lugo May 27, 2017
It is good but it needs the name of the Pokemon It also needs mew

Developer ZINA MOBILE APPS April 8, 2017 We are very happy to hear that. Thank you.

King Lake May 6, 2017
I like it but I look at the gallery no pictures of Pokemon

Developer ZINA MOBILE APPS May 6, 2017 Thank you very much for your great feedback.

Jaya Srivastava August 4, 2017
This app is very good, but I don’t come to know that where to save any colouring/drawing

Developer ZINA MOBILE APPS May 25, 2017 Thank you very much for your great feedback.

M SRINIVAS July 2, 2017
I loveit you no that is soon asomeApp

Awsome Gamer4 June 3, 2017
Well I like it but there’s a my little pony Inthere

Kimberly Sumpter August 27, 2017
It was great!some Pokemon were in the wrong generation but enjoyed the Pokemon they picked out!!

Developer ZINA MOBILE APPS April 18, 2017 Thank you very much for your good feedback.

UnknownJuly 3, 2017
It is good for people to practice their coloring

Developer ZINA MOBILE APPS May 4, 2017 Thank you very much.

UnknownOctober 19, 2017
Not sure where the gallery is and the colouring can be sooooo annoying as it’s hard to get the small bits on the picture.

Paige Urmston June 18, 2017
Can someone please tell me where the gallery is

UnknownOctober 25, 2017
I love this game because you can do the same pic over and over as many times as you want

Pea Jay October 6, 2017
It wouldn’t save to galore i would go to galore and the pic was not there

Preston Marker September 24, 2017
I Like it just wish it had all pokemon.

Polly Adams July 26, 2017
There is no jolteon, vaporeon, flareon and many more

Jennifer Cowart July 24, 2017
When I did a slid show it turn out great because of your pictures