Relive the journey of Curiosity.

There are some minor bugs that always sabotage my missions, when i entered reentry phase, suddenly im already on low altitude then i slammed straight into the mars surface! And ill recommend that we can do science experiment after landed on the surface. Note: if anyone is wondering why you can’t cut the cable, you can do it upon rover touch down, and you gotta act fast before the skycrane lands on the rover it self! 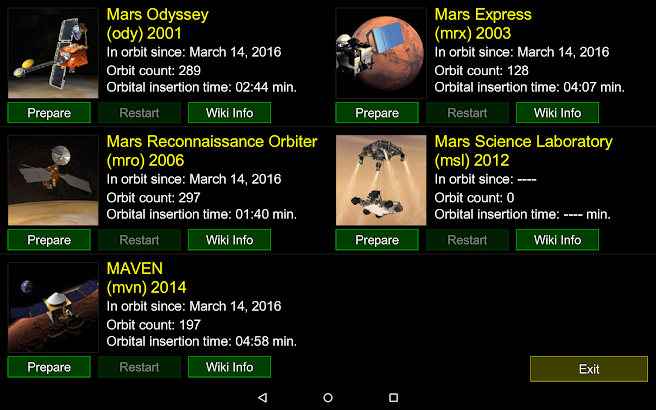 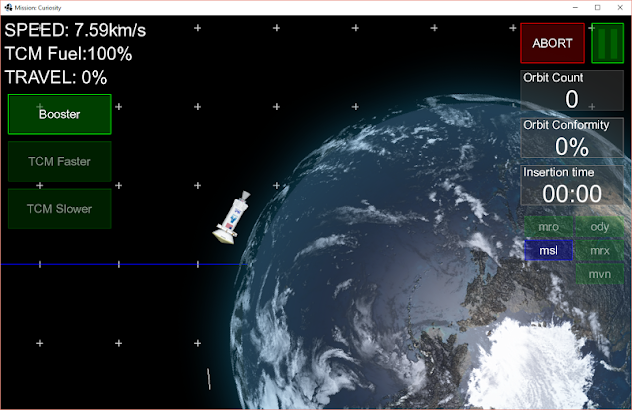 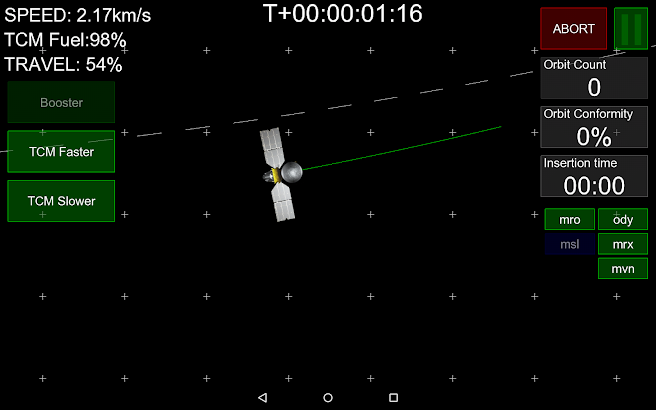 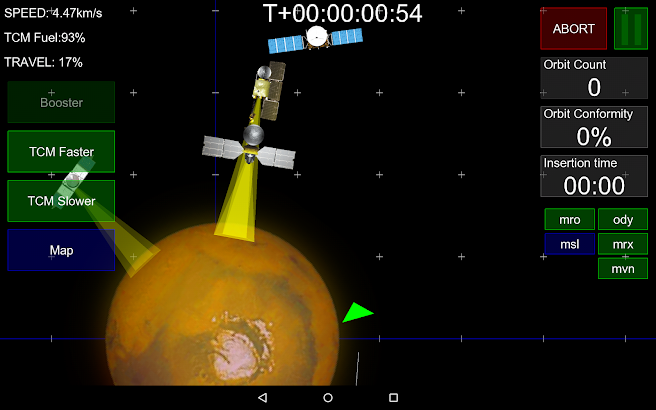 What does it take to land a nearly 1 ton vehicle on another Planet? Curiosity: The Mars Mission(CTMM) is a simulation of sending NASA’s Mars Science Laboratory to the the Red Planet. This is SERIOUS SIMULATION STUFF. If you don’t know a thing or two about space flight and orbital mechanic you may find it extremely hard to complete your mission to mars.

Aside from the Curiosity Rover, CTMM also features ALL orbiters currently in orbit around mars. You’ll use the orbiters to map out mars and select a target landing site for your rover.

We hope this app will get people excited about space travel and also highlight some of the difficulties in getting around space.
Please let us know of any bugs.

ShinyStar 614 March 29, 2017
There are some minor bugs that always sabotage my missions, when i entered reentry phase, suddenly im already on low altitude then i slammed straight into the mars surface! And ill recommend that we can do science experiment after landed on the surface. Note: if anyone is wondering why you can’t cut the cable, you can do it upon rover touch down, and you gotta act fast before the skycrane lands on the rover it self!

Ethan Ep January 13, 2017
Very educational and fun. I can’t figure out the space lab mission. It has me launch a curiosity mission but when I get to Mars, my craft is plummeting down at 4km/s and while the help text says to wait around 30 seconds before lift is effective, I hit the ground long before then. The white trajectory line is almost vertical. I can’t deploy parachute. I can’t do anything. I just crash. Same thing happens when I’m looking at a map from an orbiter and launch a mission. Aside from that, this is arrive.

Developer Reflective Layer February 13, 2017 Thanks for you review. We going to take a look at that issue and try to resolve it in the next update if possible.

techied March 17, 2016
Please make more help text after you release descent stage it was hard to figure out what to do

Developer Reflective Layer March 18, 2016 Thanks for pointing that out. We will tweak the help system in the next release.

Pratidhwani Biswal April 2, 2016
How to cut cable… The cut cable option is not getting activated… Please give more help texts

Braeden Mikesell December 3, 2016
This game is basically just space agency just not one option but otherwise,Perfect

Tania Sanz August 5, 2017
Worst game ever that i crached every time

Emma Vlogs March 28, 2016
You can’t control where it goes. You don’t get enoughfeul.

Matthew Bliven December 28, 2016
Great app. This is not a game. Please include rover transmission after landing.

Steven Downs February 3, 2015
First thing I noticed was you don’t get to release the parachute on time for the descent and landing. They start you on the mission too freakin late. If the descent and land mission is the easiest I’m in trouble. The ads are pretty shady too. Kinda scared me so had to uninstall the app.

Joshua Kolberg July 27, 2015
I think this game is awesome, and I would love to give it 5 stars, but there are a couple bugs that are really annoying. The first bug doesn’t allow you to cut the cord and release the rover, which is problematic… The second bug occurs during the change between interplanetary travel and atmospheric entry. This bug completely skips the entry sequence and has you plummeting to the surface, without the option to deploy the parachute, resulting again in mission failure.

Developer Reflective Layer July 27, 2015 Cutting the cable requires that yourhorizontal velocity is less than 2 m/s in either direction

Jason Underwood October 24, 2014
Great game, I suggest a few improvements: the ability to pinch zoom the screen, spoken commands rather than popup help, help on releasing and cutting cable (no help for these steps currently, it should say the horizontal speed and altitude required to do these steps) ground missions for curiosity such as drilling and driving (programming minigame) these features would make it worth paying for.

Ventura Manzanares August 13, 2014
Makes you appreciate what it takes to get to Mars. I’ll never get any funding for my next mission. What a great app. Major challenges and cool graphic design and interesting levels. Curiosity is a keeper. Ilove it. Ventura

Nay Myotun October 8, 2013
As you said I’m so difficult to land on Mars. But now I love it . Mission make me so excited. I desired to play such apps more.Please try more apps for us.Thanks.

aviral srivastava May 21, 2014
I like this game very much coz I hve a lot of interest in astronomy but the major problem that I hve found is low graphics I hope it will be improved in the next update

Josh Toten April 6, 2014
I’ve mastered everything.But there are absolutely zero circumstances that allow the rover cable to be cut.Fix and I’ll rate higher.

Dean Su August 2, 2015
Is the parachute always supposed to chase you even when you fly against the prevailing wind???? Also whenever rover touches the ground mission fail, even with 1 m s^-1 horizontal speed.

Ather Mahmood June 1, 2014
Well done to the development team, keep it up. Willing to pay for more stuff! @Marco you have to have a low horizontal speed to cut the cables. +/- 1-3 m/s. Same for releasing the Rover. You get a real sense of achievement when u do the whole mission. ?

Kuba Rodak January 12, 2016
Good but could you add the option to drive the rover when u landed it. Not fancy drivin’ just two buttons for two sides.

Daniel price February 14, 2015
I love this game and would gladly give a 5 star rating but unfortunately i cant explore anything. I can send satelites into orbit and veiw the maps they lay out but when i start the skycrane i cant cut the cord. The action button remains dark please fix this so i can enjoy the full extent of this what would be an awesome game

IroNClasHTM January 6, 2016
Great game with very good graphics. The only thing is that there is no way to run the rover. Otherwise love it. Please add option to run the rover on the surface.

Graeme McKay July 15, 2015
Any idea why AVG advised me to Un-install this app immediately?

Developer Reflective Layer July 18, 2015 The Free version of Curiosity is supported by ads to recover the development cost.

sahil patil August 27, 2015
The game showed me an advertisement, when I tapped to open, it redirected me to an website (unknown) that asked me to download a file, suddenly an pop up icon of my antivirus appeared that this file is a malware, do not download.

Developer Reflective Layer August 28, 2015 Do you remember the name of the ad? This is the first time we are aware of this.

Phil White February 9, 2014
Teaches a lot about orbital mechanics and the current satellites around Mars in a fun, engaging way.Makes for a good time waster too!

A Google User July 6, 2015
nice little sim for getting to mars. educational to, if you’re into space and being able to get to mars

27darkone August 28, 2014
Why does every app these days get to need to know my phone call info and who im calling via remote link..

Nicholas Ansell August 30, 2014
I would rate it higher unless I have full control, not having to wait for commands, does the cut cable even works???

Andrew McAllister July 6, 2013
This is perfect & keep up the work! I have learned alot thaxs again

Darren Hope May 27, 2015
A challenge to get control of your orbiter, at times frustrating but really addictive.

Popcorn Pokemon August 2, 2017
Good job but more 3D animation but keep improving so bring more fun and challenging games to kids parents so keep up the work or mission fail

Pradeep Sonavane November 22, 2013
Its good app.need to iprovement in graphics and sound..Please fix this issue.

ROGER Cor April 23, 2014
Difficult but worth it when you succeed

Alexander Reniel A.V. Smith April 30, 2015
This game is nice but if you can add timelines and the spirit rover would be nice