Explore Juug-Land and Live The Life Of A Juug Dealer. Cook Your Own Juugs and More!

I don’t like the wording but overall its not to far off of the real one. (Dope Wars Crack House) So addicted to making money lol. Best ever 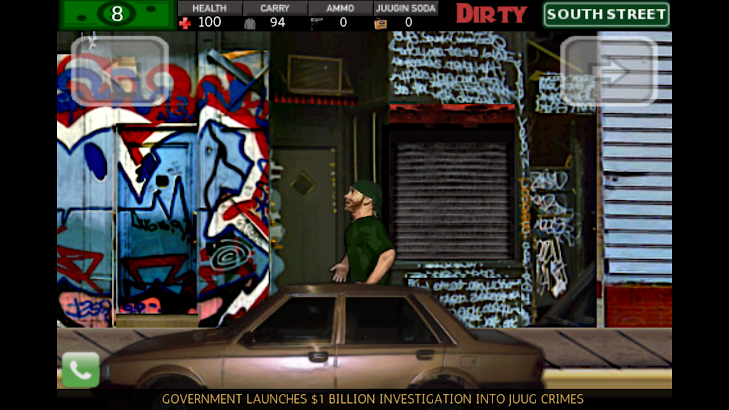 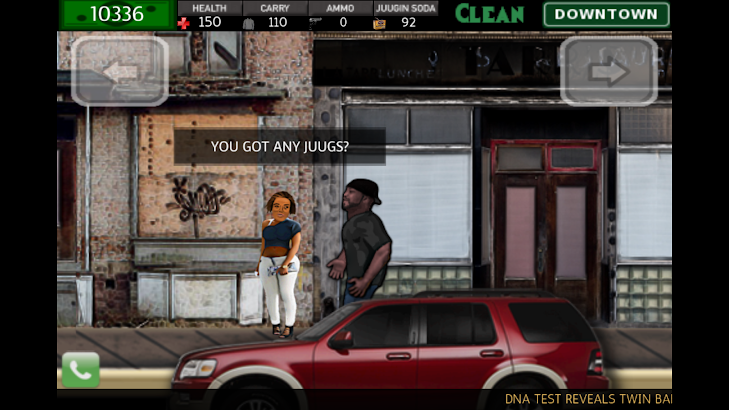 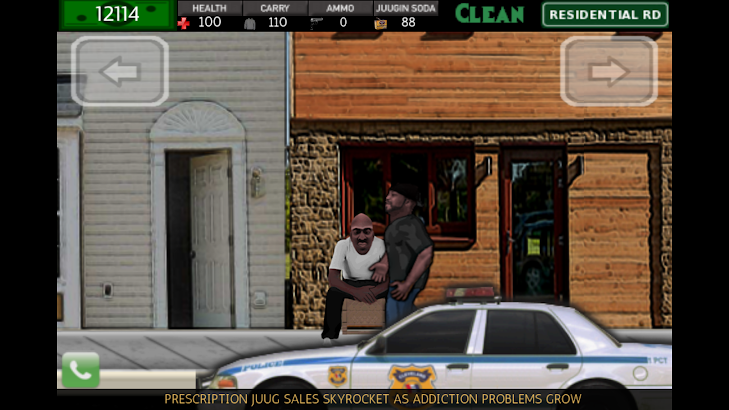 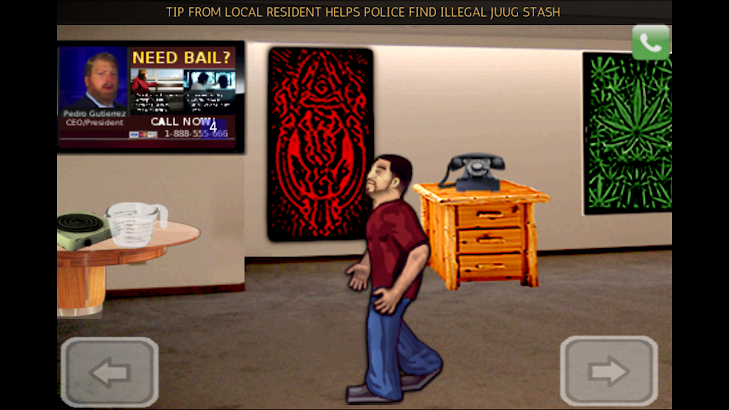 Live the life of a low-level juug dealer in this modern version of the classic game, Dope Wars.
Walk the streets, explore the city, enter buildings, buy your juugs, cook your juugs, keep a stash, serve your customers, rob your customers, employ workers, manufacture, cook, cut your own juugs and much more..

-Start out small and explore the city…encounter fiends, cops, crooks and customers in a fully interactive 2D side-scrolling/sandbox environment.

-Cook up a fresh batch of juugs in your own expandable juug house! Use juugin soda and white to whip up batches of your own juugs…

-Enter buildings to find new plugs and all types of different juugs! Visit the various stores to buy weapons, abilities, coats, upgrades, and even more plugs for extra juugin…

-Find the best stashes to keep your juugs safe & travel by bus, car, or bike to explore the awesome fully interactive juugin city!

-Purchase a production facility to become the plug & employ workers to cut or manufacture your juugs.

-Take your juugs to the streets. Touch on passing cars to flag down drivers. Keep an eye out for patrolmen, angry shop owners, and snitches if you are dirty.

-Avoid warrants for theft, weapons possession, evading police, attempted murder, and manslaughter or you will be in for a long prison sentence.

-Watch the news ticker to keep up with ongoing juug busts and events which lead to price changes.

– Timed Mode, make as much cash as you can before the feds arrest you on conspiracy charges.

This game is available for free & at cost. Any future sales will go to help lost cats worldwide & to build the Lost Cats Worldwide Foundation International, a partner company of NOTBADAPPSLLC-INTERNATIONAL Inc / Multinational Conglomerate Company. Please contact us for any inquiries.

Nathan Ravencraft October 20, 2017
I don’t like the wording but overall its not to far off of the real one. (Dope Wars Crack House) So addicted to making money lol. Best ever

Jeffery Levy October 14, 2017
Cool asf…need to be able to have more realistic features on ways to spend money. Like buy houses,warehouse, crews instead of jus workers. Also allows players to go to jail face charges and bond out. Be denied bail, pay cops off , robs stores, pay off judges and politicians, have gang and turf wars wit shootouts.Buy and own clubs,restaurants,carwash,food and cothing stores,gas stations,wash houses,apartments,pool hall,liquor stores and more robberies breakin ins and mire crime.

jeanette burch August 16, 2017
I wouldn’t normally give this game five stars but one day I was playing and had everything I bought went back the next day lost my vehicles my computer my TV everything my runners everything about to uninstall but hopefully I’ll get a quick response to this

David Villarreal August 9, 2017
In my opinion these game is the best gamr I have ever played its a really time killer. Best drug game you will ever play in your life but they should keep adding new feature to the game to make it more fun because I already own everything that the game offers so with more features I will have something to do.

Dk Edward August 10, 2017
What’s with all the weird color changes? Feelslike the game is getting a littlecartoony. This is not a game for kids!!

A Google User September 6, 2017
Best game I ever played after GTA. I think you’ll should invest more into graphics

Devin Jacobo August 9, 2017
Whens the next update btw Still got the old one dopewars crackhouse

Charlie Ferris October 18, 2017
Sapposed to be makin money but police get u majority of the timecan’t make it to next door with out cop busting me

Eric Caldwell September 9, 2017
I like the old version better. Yet the upgrades are OK too, make shootouts more realistic

Tony Gardner October 8, 2017
GAME IS AWESOME NEED BETTER GRAPHICS AND MORE CUSTOMIZATION IM WILLING TO INVEST IN THIS GAME JUST SO IT CAN HAVE BETTER GRAPHICS

Angel Perez September 4, 2017
I started off with only 19$ cant really do anything

babberdy dabberdy September 5, 2017
The funnest game I’ve played on a smartphone since I’ve owned a smartphone.

chris bennett August 1, 2017
This game banging just want to add a side chick for the crib and make where I can change my clothes but other than that the game sweet

Developer NOTBADAPPS -_- ENT July 31, 2017 We’re working on this—Next update is on the way soon to expand juug points & more.
Thanks

Many Hotz music July 31, 2017
Maybe more stuff to buy in the stores and online or etc

Tre Gr August 14, 2017
Why did yall change so much it was way better as crackhouse

Logan Korn November 5, 2016
I liked it better when all the drug names were normal though but the slang is good I know what everything is. I think an idle feature would be cool where my runners and manufacturers still work while I’m off. And also runners should just sell from your stash and get crazy money during a juug rush

Developer NOTBADAPPS -_- ENT November 10, 2016 Thanks we appreciate all the feedback & support!! We’re working on expanding this app & bringing many more great apps soon!… It’ll all be cleaner, & more real. We’re working on some big things for the future!Please share this app with friends & feel free to contact us via email if you have any ideas or questions.

Dren Eds January 15, 2017
Game is okay, but after playing for a day almost. You lose production, levels, and time. Game is repetition play, and time consuming. Auto save doesn’t work all the time, even when you personally save the gaming play personally. Each time you log on, you have to choose a different character also. But it keeps track of my highest earned amount, but not what I bought with it. This ducks, after constantly back and forth repetition to generate the money, to upgrade.

Bruciebruce Dunndonette March 12, 2017
Really missed this since you guys disappeared for a bit there. Can you bring back the second one where you cad to take out the different bosses of the streets and you could break into people’s homes, can’t remember what it was called but it was more cartoony. Either way it’s good to see you back. Can’t find all the stash spots.

Todd D January 12, 2017
Game was going great. I bought production factory.. Bought a grow groom cutting lab and cooking lab.. Yet nothing is being produced in my stash.. So I wasted$2mill? :(. I hired workers for every street and they all have work but they not selling anything and I have one worker on level 20. Also I have shootout with cops like 200 times and in the stats it says I have not evaded police once and considers my rank a sewer rat.. I’m going to hard on here for this little production.. Please fix this.

Ivan Gaytan September 15, 2016
It’s a good game. It’s cool that we can save progress. Only problem is that my runners don’t do anything. I leveled them up and gave them juugs and they never sold them. I ended up taking the juugs back and firing them. Is there a glitch on the runners or how long are you supposed to wait for them to sell.

Kevin McCormick September 9, 2016
I love this one better then the other one just need to have it where you can hide when the cops come like the other ones where you can take cover and can you still hire girls to cook DA drugs and add where you can go to jail but don’t put the guy with the shank in jail it be cool if you could accutally do jail time then grg out unless If its life like where you could deal in prison or do work in prison to get out on good behavior and if they could raid your trap house that be cool af

Justin Hapo October 29, 2016
The game is awesome and addicting.Now I have near a billion dollars,millions of grams in production its just boring and pointless.My workers are over lvl 4000 and they still get busted and barely sell enough for the investment.Fine tune this game and make it more challenging in the higher levels.Also make an option to kill the street snitches and marks.

Raymond Pollicino March 3, 2017
This game is on point lol your hustlin an robbin an mobbin. Buyin dope for a low price and sellin it to make a profit, catching the bus to go wherever slanging on the streets and in houses lol cop chasing you, youcan snitch lmfao!! Lmfao ahahaha buy soda an hot plate. Buy body guards and weights to get bigger to fight. A lawyer and computer order stuff off graigslist lol LMAO WOW hahahaha

The Destroyer November 25, 2016
I think it would add a more indepth effect if you could shoot at the cars that drive away when you tryin rob them and it would be pretty cool if the weed you buy you could choose to smoke it just some things i think would add depth to the game

Josh Byerline April 1, 2017
Well I saved the game but when I logged back on it made me start over…saved my high score but what’s the point of a save option if it’s worthless…other than that it’s an Ok game…a little repetitious but I kinda figured it would be…after you just sell drugs over and over.

Paul Lewis May 4, 2017
This is just a pathetic advertisement generator disguised as a game. The ad generator works perfectly and is relentless. The game is broken and doesn’t work at all. This appears to be for the purpose of generating huge number of ads to annoy you such that you can’t play the game. Really pathetic. Finding something else to play,that works and doesn’t exploit it’s customers.

Pearce the hood hippie October 22, 2016
I started from the bottom by selling that green. I meet a man that gave me deals till I could setup my cooking operation. I went to my neighborhood store that I bought my fat hoodie with all the stash spots on could need for the time being. I also bought a pc, a gun, hotplate, and a don’t snitch DVD. I got home and went online to buy juug soda along with a tv. I called a dude about some white and quickly started juuging. I started to make it big when I hit the back button only to quit out with no save.#juug