Build your army to defend the forest against mechanical invaders!

Army of darkness rip-off. Controls are not so fluid at times otherwise it’s an okay game. 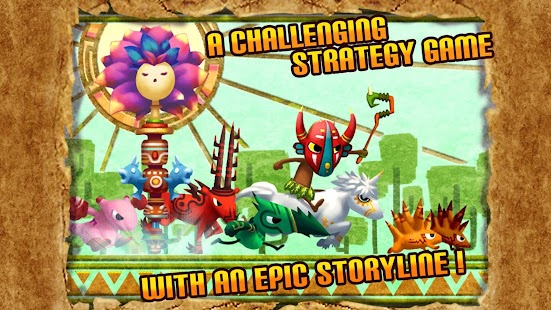 Ethan Teoh January 30, 2017
Army of darkness rip-off. Controls are not so fluid at times otherwise it’s an okay game.

Peter Zamora March 4, 2017
Definitely see some improvements from the last time i downloaded this game

Devon Chase February 15, 2016
UI’s cute, the games fluid and fun but it does sorry if insist you buy “sun”. The midst obvious way is even when you have enough sun to level a skill or numen it says you don’t and takes you to the buy page

Robert van Leeuwen September 13, 2015
The curve of reward versus expense is either atrociously untested (it isn’t) or geared heavily towards getting you to fall for buying crap.

booboo poopy October 1, 2015
It fun decent game that doesnt force u to spend money, really tired of games that u pay to win, the whole concept is so lame

Shadow Darkmoon February 23, 2016
Not bad minus the random ad pop ups other then that a pretty good game

Stephen Lunt July 22, 2015
So addictive everything is a challenge the pachyderm cannon is so powerful everything is exiting when you get a new neuman saskuka is so so so so POWERFUL!!!!!!!!!!

Dustin Harmon May 13, 2013
This game had so much potential. There’s no strategy to this game. The healer only heals a very small percentage of ur health even when maxed, has a high cost, and you can only have one! Enemy healers are unlimited, heal a lot more damage, and make the boss on lvl 50 invincible. The enemies can even fire behind them, and sometimes hit me on the other side of the screen! I’ve been grinding lvl 50 for more than 12 hours, have everything maxed, and can’t kill a single enemy when the bosses and healers are out

Suprotim Dutta July 8, 2013
No issues really other than I have noticed the devout becomes uncontrollable for roughly 1~2 seconds after casting a spell. Kindly fix this issue please.

A Google User May 24, 2012
Fantastic game with great atmosphere and replayability. Update on 21/5/12 greatly improved game but still not quite there yet. Still get RARE failed texture loads, resulting in black sections of the playfield. Touch screen controls are much more responsive yet still occassionally fail. Enemies damage/targetting mechanics still flawed. If low health you can still take damage (be killed) from opposite side of screen by damage overshoot when an animal dies, or be chased past your frontline. Max your laminaceph

Paul Lewis June 4, 2015
Short game. By the 4th battle (stage 4) you quickly become over-matched and overrun and it just gets worse from there. Needs more gradual increase in difficulty to make it playable and fun.

Aaron Castillon April 25, 2013
The graphics are so excellent and the game itself is perfect. And the people who said that the game is hard, they are so really wrong about it. Maybe they should try more strategies. Overall: perfect!

Genevieve D July 12, 2013
Ive installled this on all my phones, xperia arc, ray, galaxy note, galaxy s3. Great game play once you learn the strategy. Unfortunately it crashes on my S4 and I cant get past level 15 ? I’ll change to 5 star rating once it’s fixed.

Holly Gill July 24, 2013
I have put a three because for me the bad guys are way overpowered even on stage 4, even of you are hardcore gamer, but I do think it is good to have a go at as it is very addictive and fun. If the bad guys weren’t over powered this game would be amazing and I would give it 5 stars.

Patrick Cotner May 28, 2013
This is a fun game, but the amount of glitches and problems really ruin any fun had. It has frequently crashed my phone. There are minute long wait times, not even in between games, but in between menus. One big problem which would be easily fixed but remains unsolved is the fact that ads cover up essential information during gameplay like your health which make it difficult to play effectively. Fun game, poorly implemented.

A Google User March 17, 2013
How about changing the scenery around as we progress.Have the scenery present a few challenges as we get closer to the boss.

A Google User May 29, 2012
Not bad.but sucks when u need sun power badly coz after lvl 11 game is rigged to make u buy sun power

A Google User November 11, 2012
It’s awesome !! And the animals you send out! But they should make the leader a faster attack it needs to stop exiting out by its self

A Google User November 22, 2012
You can’t choose the stage you want to play. Enemies got way stronger after stage 30 and if you lose you only get a little money. You have to keep playing and loosing the same stage over and over again to earn money to upgrade.

Hayden Bickford August 31, 2013
Sometimes it wont let me move my person and it freezes and kicks me out of the game after ever level.

A Google User August 23, 2012
It kicks me off in the middle of a level. Very frustrating…but fun & challenging.

Derrick Hillman January 10, 2013
I think it is a great strategy game and u get stuck on somelevels but please make it a little easier with differnt modes like hard easy and medium thanks

Win Kyaw May 10, 2013
Takes forever to finish loading. Had to restart the game all the time. Glad I uninstalled it. ?

Joshua McDonald September 3, 2013
Can upgrades show what next level will give and also it’s started crashing when I don’t finish a level soon as I press continue

Oke Soo Hwee February 28, 2014
i accidently uninstall the game made all the data gone when i was at stage 52… need to start all over again…..

Elson Lee September 5, 2013
remove the ads or move ur lifebar to another location! the ads blocked my lifebar and i cant even see anything!!!

You can now earn free Sun Points through the new Offers system !

Darkness looms over the magical forest, and it’s up to you to protect it. Amass your own army of magical beasts and defend the ancient forest from evil forces that threaten to destroy it! Jump right into the battlefield in this refreshing twist to the tower defense genre and show them what you’re made of!
A Captivating Epic
Forest Defense tells the story of the Devout and his epic quest to defend the last Hamadryad and her ancient forest. Once a tranquil haven for beasts of all shapes and sizes, the Hamadryad’s Forest is on on the verge of destruction, systematically assaulted by enigmatic mechanical invaders called the Automata. Only the Devout stands in the way of complete annihilation.
Not Your Average Tower Defense Game
Forest Defense combines strategy and tower defense with real-time combat action, resulting in a game that is as intuitive as it is exciting – and free!
You command the Devout, a being who serves the age-old nature spirit known only as the Hamadryad. Wave upon wave of Automata invaders are slashing and burning their way towards the Hamadryad, eager to devour her power. You must command the Devout in battle and summon the fiercest animals to aid you as you attempt to defend the forest against the relentless onslaught.
Step into the Heart of the Battle with Forest Defense
Build and lead an army of original and uniquely designed magical creatures. Gain experience and upgrade the Devout, his powers, and the forest’s creatures. Fight alongside your beast soldiers and repel the unrelenting Automata in massive battles of truly epic scale. Dodge the enemy’s attacks and devastate your opponents with the Devout’s melee and magical abilities.
Build an Army Like You’ve Never seen Before
Guided by you, the Devout will use the powers of Sun and Water to oppose the heartless Automata, but one defender – no matter how powerful – cannot succeed alone. Conscript, upgrade, and summon various ferocious beasts to aid you in your Forest Defense. These fantastical birds, mammals, reptiles, and mythical creatures will follow you on the battlefield in a last desperate attempt to defend their home.
Challenging and Exhilarating
Are you ready for the Forest Defense? Fight increasingly difficult levels of frenzied action to defeat the mechanical invaders. Remember to choose your soldiers wisely: the right creatures at the right moment could change the tide of battle. Forest Defense is an exhilarating tower defense game that challenges your strategic abilities and reflexes at the same time.