Ladies and gentleman, iPuke is the craziest drinking game youll play, EVER!

Love this game! The game is awesome and definitely entertains. Just wish the card packs added more cards after a while to spice things up. I bought a few card packs but depending on which ones you pick per game it would be niceto have variety and not do the same things after a while. 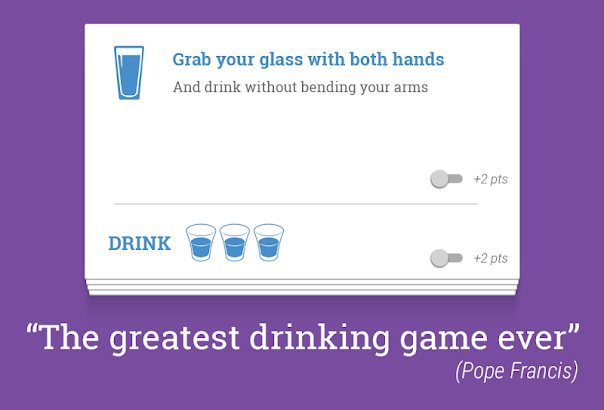 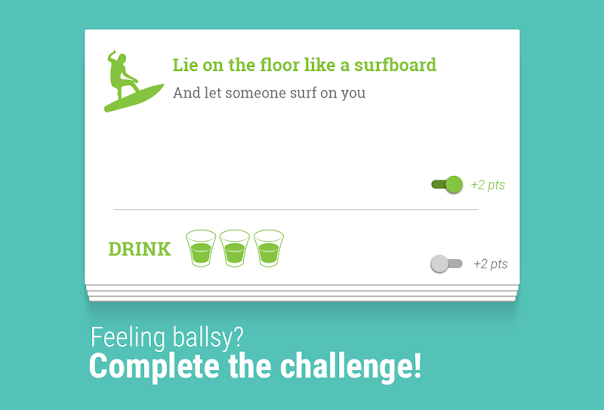 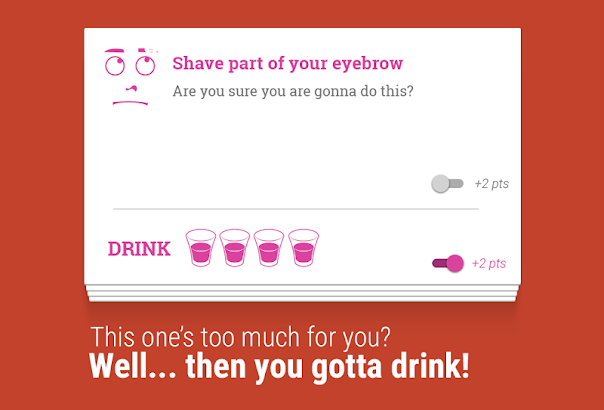 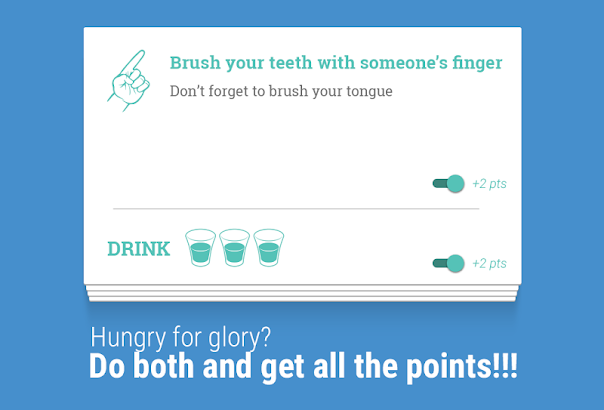 We spent thousands of dollars worth of booze to come up with the best drinking game concept on the planet. If you’re after an epic night, all you need is the app, your insane friends and no sense of self respect!

On every turn you’ll draw a card with 2 challenges: a dare and an amount of shots to drink. You must do at least one to proceed, and they’re both worth points. The first brave player to reach the points target wins the game.

Wondering what kinds of dares you’ll be facing? There are over 100 of them, but here are a few:

Well, are you ready?

Celeste N. January 17, 2017
The game is awesome and definitely entertains. Just wish the card packs added more cards after a while to spice things up. I bought a few card packs but depending on which ones you pick per game it would be niceto have variety and not do the same things after a while.

Timmy Timmy December 31, 2016
And this game is meta, it’s creative, it’s humiliating and it’s an entire world of fun. I didn’t buy any bonus packs but I genuinely might based on how fun this game is. Play it with people you have a good relationship with and you’ll have an INCREDIBLE time. 5 DAMN STARS YOU DRUNK BUGGERS! (Written while hammered)

Adam Pantak January 11, 2017
Couple of things. Wild cards are great and there should be more variety. The scoring system is slightly flawed as the starting player has a significant advantage, even when going head to head with rest of players, as once he hits the required number, the game ends.

Jana Michel June 19, 2017
It was so fun. So you should let people play a certain amount of times to win another group of tasks to do. Idea fun for a couple. Bit should have separate tasks 4 two ppl. Couples … Or a group. Some aren’t appropriate for multiple pastures

Jacolene Benade July 22, 2017
Mean in a bitchy childish way. Making unemployed ppl drink and letting someone touch your boob just for a game is not neccesarily the way to have fun. There are more creatove ways to make a game fun.

UnknownJune 24, 2017
Love this game! Bought 4 packs of cards, but wish you could buy them all at once for a discounted price or a pro version. Watch out for the too hot for you pack, its not safe for most situations haha

Ryan De Klerk January 16, 2017
Gonna drink with my friends and I got those extra cards that costed quite a bit of money but I am loving it so far wish me luck

Casie Boyle January 12, 2017
U shouldn’t have to pay for decks or there should be more to the starter deck… The more people play amd download the more people download and more profit… The free deck needs more everytime you play and the more you play the other decks price should go down.. All other decks are 1.99 leaves no option or imagination it makes players turn away

CharQuise’ Darby March 13, 2017
This game is so much fun! For every task you have to accomplish you also have to drink or be a sore loser but either you have to drink. The screen also hours in an out so it’s really interesting! There’s several categories where you can choose from as well. Love it!!!!!!

Jp Bronkhorst September 18, 2017
Hi guys Firstly awesome game… I just have problems with in app purchases, Hence I bought 5 Decks but one of them still shows it isn’t bought even though the amount was deducted from Google play account.Please do help me? Or just refund payed amountKind regards

Skittlez June 4, 2017
Overall great game except you should be able to turn off the blurry effect that happens every here and then cause it was disturbing to my friend and she couldn’t even look at the screen cause she felt like shed have a seizure. But overall great game 5 stars

Marius Engelbrecht December 27, 2016
Its an awesome game, full of fun and laughs and obviously drinking, would just like if there is a skip options and maybe deduct points if such an option could be made availble it could be great! Awesome guys!

James Conaghan April 16, 2017
I actually just bought the upgraded pack and pissed on my girlfriend. Great now I’m single with a 2 grand ring! Worth it for the sesh tho

Jeremy Hendricks January 2, 2017
Starter deck contains the best of most decks but if you want rules get dictatorto add more fun or if want sexual game get spicy and the hot decks

ZY January 14, 2017
Only thing is change is more cards tbh, and don’t make me pay for the sexy ones haha

Cole Bowers September 23, 2017
Me and my wife used wine and are extremely drunk. This game is great! 5 out of 5 stars. Really funny and fun to play

Dilan Marais February 5, 2017
It’s a great game me and my friend where so wasted after dat the game ernd the titel iPuke we literally Puked because of the game I only wish the score limit was a bit more because wen it just starts to get fun theb someone already won but the game deserve 5 stars.

Benjamin Jeffrey October 12, 2017
This is like cards against humanity but less stupid and more not stupidm. Thanks you guys for making me make out with my wife and sister and spanking a neighbor who I also asked if he sold drugs. 10/10 with rice

Turquoise Cheetah June 8, 2017
Had many a drunk night because of this game! Need more options though, and less involvement of social media. I don’t have any social media, so I had to drink for a lot more questions.

Høkzii Døvah May 28, 2017
This game has caused more sexual encounters than going to a swinger party.

michii aguilar April 14, 2017
ipuke is awesome! And the player who i am right now is a big loser.

Ryan Ranow April 25, 2017
They stash the free game in the middle of a bunch of in app purchases. The first two cards we pull out of the free deck are “Recommend this app to someone” and “Post a picture of the group saying you’re playing this game.” Are you kidding me? I’m here to play a drinking game, not to be your PR manager. Uninstalled.

Mandy Brott March 16, 2017
I love this game ? I hate the fact that I have to pay for extra decks but it’s too tempting not to so I have bought a few. Perhaps add a bonus few cards every now an then for those that buy decks?

Jerod LaCotta March 23, 2017
Would give it more stars but the app keeps crashing when I try to buy the deck add ons

Jamie Ott August 16, 2017
This game is rad with friends, I feel it could be better with world wide suggestions and lots of man hours to sift through the rubble to find golden opportunities

CFCrobbieCFC December 27, 2016
Only problem is the app recycles the dares/questions quite often.

Daniel Miser May 21, 2017
This game is definitely originaland fun. I cant stop laughing when we play. I highly recommend

Tavaris Williams March 25, 2017
It’s pointless that you get the points even if you dont do the dare

DIY Pabs August 31, 2017
They should make the dares get more points than the drinks otherwise there is no purpose on getting dares as the drinks are too easy.

charnelle trout February 11, 2017
Dudes.. Never had such a good time making out with a wall!

Palmi Thorarinsson August 4, 2017
This game is AMAZING for having fun and getting drunk. This is the perfect game so I would give it a 5/7 ?

tim Johns May 11, 2017
Absolutely amazing game, had some of the best fun while drinking with this game. Only wish there was a make you’re own cards option and more decks.

UnknownOctober 18, 2017
This is legitimately funny, the challenges are original and not embarrassing enough to make you too uncomfortable ? Great fun, would recommend

Thomas Blagdon December 27, 2016
Great game. So fun. Puts some life in the room!