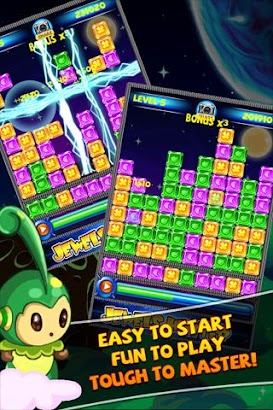 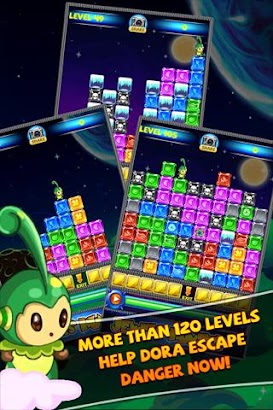 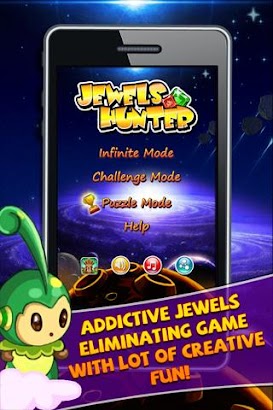 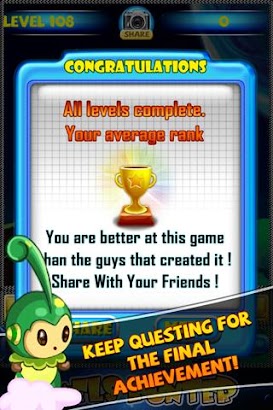 Jewels Hunter with Space science fiction theme is coming! An addictive Jewels match3 & eliminating game. It has more interesting modes which are different from the other similar games on the market. Try Jewels Hunter now!

*** How to Play ***
– Touch the jewels to eliminate them.
– At least match 3 jewels each time.
– Matching 6 jewels to create SUPER Bomb Jewel.
– Matching 10 jewels or more to create HYPER Lightning Jewel.
– The more jewels eliminated , the more scores you get.

*** FEATURES ***
★ Nice, clean graphics and smooth game play.
★ Easy to learn, Fun to play, Tough to master.
★ 3 different game modes with great fun:
– Infinite Mode
– Challenge Mode
– Puzzle Mode
★ Infinite Mode：
– Get More Score to level up, Jewels will fill full the screen automatically.
★ Challenge Mode：
– Jewels will fill the screen in a given time. Once the jewels fill full the screen , you will fail in this level.
★ Puzzle Mode
– Help Dora escape danger! Dora can’t move on his own, so click on sets of 3 jewels or more to clear a path to the exit. Create Super or Hyper jewels for popping big sets of jewels and solving the puzzle early.
★ More Funny Special Jewels in Puzzle Mode：
– Arrows Jewels make you move
– Ice Jewels is slippery
– Stone Jewels can’t break
– Prism Jewels can change colors
– Watch out for those Death Jewels
– Jump form Teleporter Jewels to Teleporter Jewels
– Make your way between those blocks to find the exit before the timer runs down.
★ Screenshots Share function
– Share your game screenshots to your friends by Facebook.

Dylan Rockwell March 18, 2015
Great game… well great time waster so addictive I just keep saying I’ll get farther this time then all of a sudden an hour or two has gone by

Stacey Hammond February 23, 2014
This game is a load crap no skill to it at all

Cecilia Skipp November 25, 2013
Good game thought it would be harder but its easy

Sherissa Albert April 11, 2014
My sister loves this game so much like I do to.

Joann Palmer December 22, 2013
Will ju dge it better afyer I play it more

tracy booth May 21, 2013
I have really enjoyed playing this game,it feels like a complete game like I would have on my DS & not part of a game of a mini game has you would would get in a game collection game. This is has good has jewel quest or tetris games,keep uo the good work, this is a great game for free.

T Sanderson May 15, 2013
On “Infinite Mode” level 21 keeps restarting itself. It won’t let you continue game play, its very annoying.

neil james Hillis May 6, 2013
Slow at start but gets faster and faster

Christi Garland July 14, 2013
All the jewel games are starting to look the same as the other jewel games. It’s also very addictive.

Mags Murray June 1, 2013
It’s canny good apart from its froze on level 21 and just keeps saying level up and not going anywhere……

Shanice Gregoriou May 25, 2013
I can’t put this game down very cool app must admit .

kyly martin June 18, 2013
obviously u dont read your reviews because you still havent fixed the glitch

Ronik Chow July 26, 2013
The coolest I ever played in all the jewel game I luv it more it rules hey ?

Randy Harrell May 28, 2013
Love the game its better than candy crush saga

Beryl Lewis September 6, 2013
Excellent game one of the bestI have played

Akshay Patel October 8, 2013
I play the game and i enjoy the very happy tothis game .