Have a magic makeover with Little Charmers: Sparkle Up!

I think this is the best game I have ever played8 but….can u plz tell me how to bathe and do other activities and make more games plz ??? ugh its not downloading plz fix this bug I will rate five stars and subscribe to this channel ? 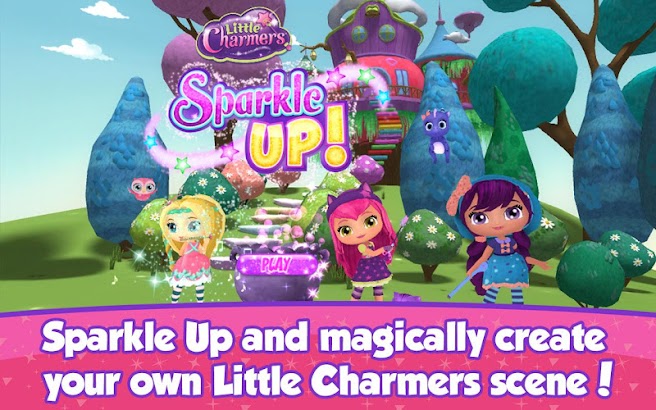 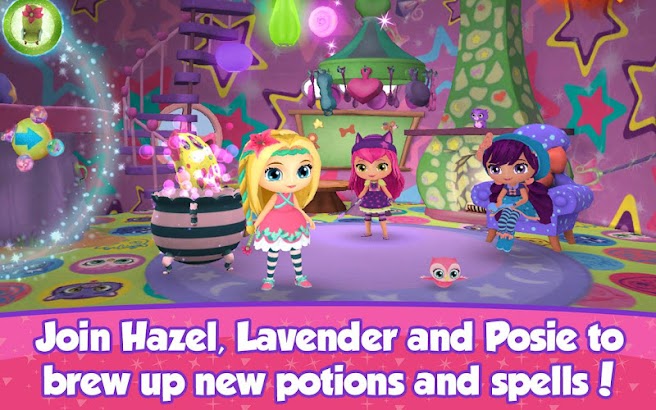 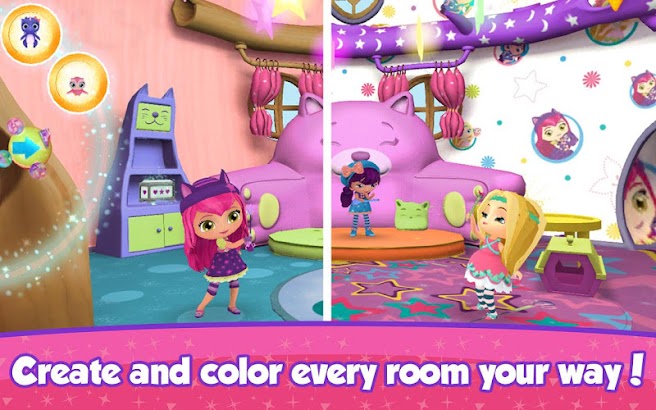 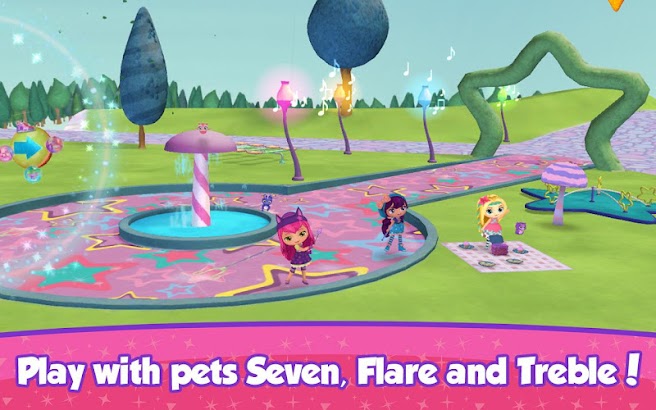 Have a magic makeover with Little Charmers: Sparkle Up!

Create your very own Little Charmers scenes by casting spells to color rooms, change locations, swap outfits and arrange charming props! Tap on objects in a scene and watch as they magically transform!

• Sparkle Up and magically create your own Little Charmers scene!
• Create and color every room your way!
• Join Hazel, Lavender and Posie to brew up new potions and spells!
• Play with pets – Seven, Flare and Treble!
• Change the Charmers’ magical outfits!
• Take pictures of your scene and share with your friends on Facebook and Twitter!*
• Put your spell casting to the test in a brand new mini-game, Magical Mayhem!

UnknownJanuary 29, 2017
I think this is the best game I have ever played8 but….can u plz tell me how to bathe and do other activities and make more games plz ??? ugh its not downloading plz fix this bug I will rate five stars and subscribe to this channel ?

Sailor Moon – Powered By LTS June 19, 2016
That,s a reason! The RAM (Random Access Memory) recommended ram is 530MB or newest , and the storage (the app can run on storage 3GB (possible) , or processor (recommended for qualcomm snapdragon) The processor CAN,T run using mediatek or intel X86. Wish this tip is helpful!

QueenNgamer and reborns June 17, 2016
All u do is change the rooms and dress them up and add school and a TV and there mom’s and let them sleep and bathe and brush there teeth…stuff like thatand more fun activities andlet them actually eat food….that’s all I want and maybe other people too so please do what I ask…thank you.☺

Irish MONSTeR December 19, 2016
Why would ppl release something that doesn’t work? Or fix it at least! I got this DL for my daughter on her tablet. She was so excited to play it. Her face lit up when we started it, pressed play and it doesn’t even get half way done loading the start up before it closes itself out and kicks you out back to your home screen. I must have tried at least a dozen times. My daughter damn near cried she was so let down. Fix your damn game or remove it! Wtf

Mona Hellard February 27, 2016
I downloaded this game for my granddaughter but the would never even open. She would get as far as the fist page and that was it. I wad very disappointed. She loves the show so I was excited to find a game.Even now trying to give this rate it isn’t working right.I can’t get the stars to go from green to clear.I have uninstalled it.

UnknownJanuary 18, 2017
This little charmers game is COOL!!!!!! You create your own scene and dress the little charmers like you want and play magic mayhem. There’s no in- app purchases nor ads. But didn’t give 5 stars because crashes in the welcome screen and the loading is slow. But thanks for this app Nelvana Digital❤

Amy From roblox January 4, 2017
I hate you if you hate it.its so smooth and has less lag then my other games.much less lag.thx for making it I, m sure we would all love it if it worked for us all. It’s way past 5 stars. The music really spots it is well I play it every day.i don’t like it… I LOVEIT.

Miranda Macleod April 9, 2016
Every time I go to play it says sparkle up has stopped intill spinmaster gets this fixed I rate it one star??

UnknownDecember 28, 2016
Becauseu can decorate the rooms and it called discover your magic and there is a another game calledi fargot the first word but the second word is mayhem . hope you loved the game too? ?

UnknownMay 26, 2017
I hate it it’s really boring all you can do is decorate the house and put them and there pets too please get this game off because this game is so boring I hate it so much I downloaded this game because I though it would be so beautiful to play and sometimes it’s doesn’t work how am I going to play if it keeps not working this is so boring ?? boring

Kittylover51607 dancer March 19, 2016
It says that you can play charmer dress up but where is it .and it always freezes on me and its boring with 2 mini games. Please fix it I’m only 7 and I’m a girl

Irish Bagui October 15, 2015
My daughter L?ved Little Charmers. But it wont load. The screen turns black everytime and too slow.. Please fix this..

aaron dunne February 15, 2016
keep up the good work my daughter love’s it.?but every time she clicks know your. Magic of something it Takes her back home screen fix it!?

Lily Lim February 21, 2016
When my daughterpress the second play button it hang. She try and try and it still keep hanging no matter what she do.

Sarah Tower March 30, 2016
It’s cute, but my daughter got really bored really quickly. Takes up a ton of room for a game where you can’t do much.

Hoo Soon Chong December 16, 2015
SUPER BORING! NO DRESS UP? NO ADVENTURES? NO MEETING AND DECISIONS OR SWIMMING?? YOU MUST BE KIDDING, NEVER DOWNLOAD THIS!!!!UNINSTALL THIS IMEDDIATELY, I HATE IT SO MUCH!

Lazeh Friends September 30, 2016
Wow i like this game this update is cool is you guys got the update its sooo much fun more games more dreeses and magic its cool

Raniyah Anderson January 30, 2016
This game is so so stupid I just installed the game and when I pressed play it literly just loged off the whole game like what the

Paula May Rabanillo November 6, 2016
Just hangs nothing is happening, despite enough space, cleared cache,such a shame

Salini Prabhath December 10, 2016
Listen me if this game is not opening its your phones problem it is clear in my phone and it is a super game??

iman abdi October 7, 2016
I love this game no matter what say BOOOOO! To the haters i love the game and i love the show If they hate this game DONT LISTEN TO THEM they are just making fun of the owner and the game

Jon Dionisio January 21, 2017
Too boring you just change rooms and mini game I don’t even understand how to play the game!

Alishba Masood February 27, 2016
When I saw the pictures,I was so impressed but when I started it so it just won’t let me play,it just hangs when I click on the second play. Plz fix it.

Alexandra Larrauri April 13, 2016
I downloded it for my little sister and i played it and ot closed 3 hours of downloading WORST GAME EVER!!!

UnknownJune 26, 2017
I hate all you do is decorate and change places and pictures when i first saw this game i said wow this game looks so cool when i clicked it i was so happy then i was play for some minutes its got boring please add things to this game please

Cailey ann Calladine November 11, 2015
My daughter really wanted to play this game but when she goes to it says unfortunately sparkle up has stopped when we only installed it today

Amellah Sebastian March 15, 2016
You just only decorate it its totally boring you do nothing but to follow it

Martin Swanigan August 2, 2016
I just got this game and wondering how it’s going to be but if its lame then DELETING TIME????????

Rose Riley November 22, 2015
This is never stopping and getting old fast whenever I go to play it it says sparkle up has stopped and I can not believe it

UnknownJune 18, 2017
This game is boring you don’t get to do nothing what’s the point of this game just fix your game plz

lps daycare! August 11, 2016
This game loads so fast I love it no adds no black screen really fun I’m the luckyest!

Raj Sharma December 27, 2016
In magical mayhem you are stuck on the mini game! Rest is good?

Cynthia R March 28, 2016
Play and animation are choppy. Game itself is super slow.

UnknownNovember 17, 2016
I can’t bath them, make them sleep or make potions with them it is so so so boring >:(