Combine Narwhals to mutate them, discover their bizarre and exotic forms.

This game is amazing I think you should play it because it is amazing that I was always 11 cuz I liked evolutions and I always loved normals and your boys are amazing on the walls Narwhals swimming in the ocean causing a commotion cuz they are so awesome. 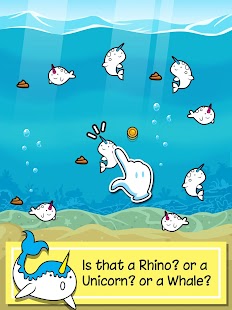 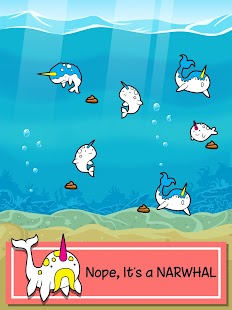 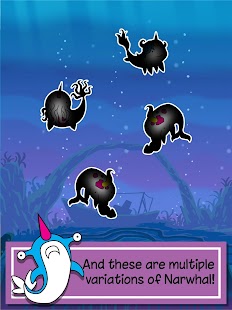 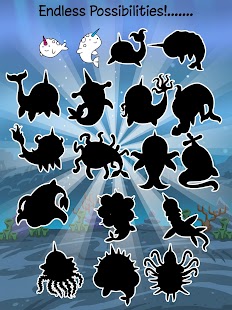 bobbie simon May 14, 2017
This game is amazing I think you should play it because it is amazing that I was always 11 cuz I liked evolutions and I always loved normals and your boys are amazing on the walls Narwhals swimming in the ocean causing a commotion cuz they are so awesome.

Bryson Glines April 8, 2017
Random video ads pop up throughout game play. A banner is always at the bottom of the screen too. If the buttons weren’t so small then it may be worth playing.

Anastasia day July 11, 2017
I can’t get lots of alians still can some one fix this game an it an there’s glitchs

Jayson Orr August 5, 2017
This game is cute coz I luv narwhals ITS AMAZING

Logan Jenkins March 13, 2017
Great game, but every few seconds a baby narwal and an opera fin spawn never ending and the crates never stop dropping which can make me very laggy if i dont pick them up.

February 3, 2017
I love this game it deserves 5 stars for everything

Developer Holy Cow Studio March 21, 2017 we have now fixed the problems, could you please update the game and try again? thank you ?

March 13, 2017
The narwhals were so cute and it was so fun to discover new narwhals

Tayler Reischmann January 7, 2017
I love these games there just so funny and fun

Stephanie Sutoris May 31, 2017
It would not let me download it it told me to remove ALL my apps

Nico Posehn April 30, 2017
AWESOME game!!!!!! I only can complain that in the species shop the game says smart fin when the narwhal is named opera fin ? Otherwise awesome​ game!!!??

SavageKryptonite Gamer 996 February 26, 2017
Very addictive but way too many ads!

SmoothIguana December 18, 2016
I’ve always wanted a narwhal game and now I do

Alessandra Perez March 9, 2017
I love the Evolution games there so fun

July 11, 2017
I love it so much I think its educational as well with matching the same animal up together I love it!!!!

Ps4 Prokiller March 11, 2017
I Study Narwhales at school there cutest animale in world

– Fixed Mars issue where the game would get stuck with just 5 aliens
– other bug fixes
Please don’t forget to give us a new rating it helps us a lot!
Thank you!

Narwhal is so little cute creature and the most gentle animal.
One day, some scientific experiments made those narwhals start to mutate.
Would you like to know what mutations happening to them?
Combine narwhals to evolve them and discover their most strange, fantastic and visionary forms!
You never seen so many mutations and crazy features in other games!
~~~~~~~~~~~~~~~~
INSTRUCTION
~~~~~~~~~~~~~~~~
• Put same type narwhals together to mutate new creatures
• Narwhals poop can become coins and your money incoming
• Use narwhals coins to buy new animals and new tools update
• You can also tap the narwhals to make more coins
• More features can let the mutations more fun
~~~~~~~~~~~~~~~~
FEATURES
~~~~~~~~~~~~~~~~
• There are more than 30 narwhals for you to discover
• This game is a similar game with alpaca evolution but more fun
• Different endings and possibility: find your own narwhal world to be special one than others
• Poop, get coins…. repeat and your will love it.
~~~~~~~~~~~~~~~~
This is a simulator narwhal world, think you are one narwhal or the god of narwhals.
Disclaimer: Although this Game is free to play, some content can be purchased for real money in game. If you do not want to use these features, please turn off in-app purchases in your device’s settings.