bull**** attack system. had an awesome meelse weapon and someone came along with a simple knife and killed me. Player locks on and watches as he is getting attacked then about halfway to his death he attacks 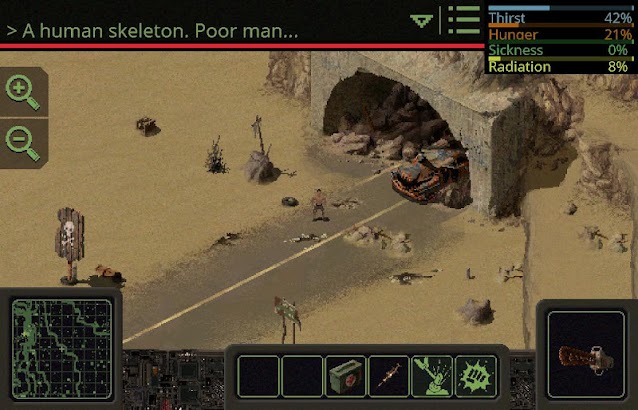 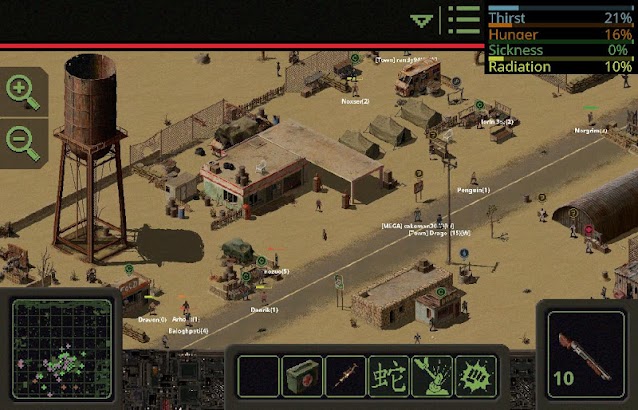 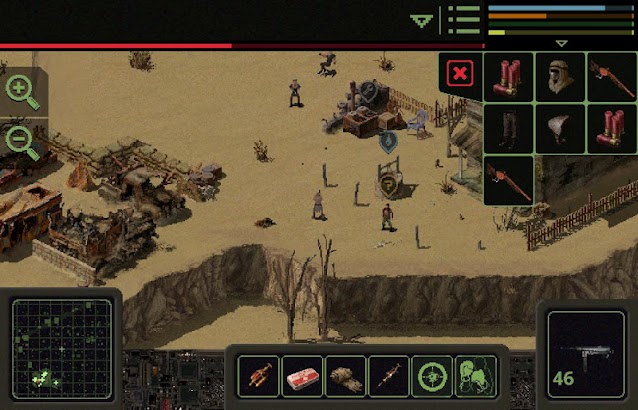 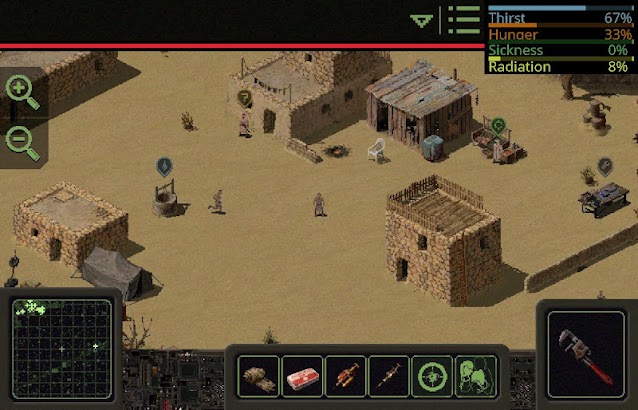 Omega Vanitas is a free post-apocalyptic open world online MMORPG game.
Isometric pixel graphic brings back the old spirit of the classic top-view games.
This old school 2D game with retro graphic and open world is inspired by some of the best role-playing games from the past decades.

* Wander and scavenge the vast post apocalyptic world.
* Fight against enemy gangs and mutated monsters.
* Make new friends and work together on your survival.
* Customize your character with many different skills.
* Gain experience and levels, solve addictive quests and improve your character attributes to stay alive in that survival game.
* Enhance your hero with hundreds of different items which you can find searching the massive world, crafting from garbages or trading with other players.
* Get pet or hire companion to help you survive in world covered in radioactive fallout.
* Challenge other players to real-time PvP duels.
* Join or create a faction to dominate the others.
* Build new structures to strengthen your faction’s domination.

The game offers many hours of classic online RPG gameplay including exciting quests and tons of different maps, enemies, items and dungeons.

Dakota January October 5, 2017
bull**** attack system. had an awesome meelse weapon and someone came along with a simple knife and killed me. Player locks on and watches as he is getting attacked then about halfway to his death he attacks

Kai Vargas October 4, 2017
I want a refund for the pet follower not even a minute after I got it.It died against a low lvl raider kinda pissed

Amber Rhoads October 14, 2017
the only problems i have is how fast the pets die and every time i put a gun and the ammo for it in storage bank i can no longer use the gun

God’s Toast October 5, 2017
You should put up a community like a peg board in the middle of the hub where you put an item or items for sale and have everything listed so it’s easier to buy and sell.

Martha Blankenship October 22, 2017
Very difficult to know what to do next

ToasterOutOfWater September 24, 2017
The chat could use improvenment although the game is fun id like to be able to roleplay more easily here. Another thing you could add to this is a PVP opition outside of the town which would make rp alot funner in this. The last thing i think you should add is better quests besides “find this” or “kill this!” Other wise i enjoyed this game with my friends.

Nate October 15, 2017
Controls need revision, having the joypad on the minimap means one is constantly clicking the minimap by accident which gets frustrating, and means that by focusing on avoiding doing so you often misclick directions. The spawn limit on maps can be trying, particularly when you have large groups on one map. Many items in the game seem like junk with often little use. Also, no female avatar adds a limitation to customization and diversity, my partner wants to play this but doesnt want to use a male avatar. Needs a level cap, seeing a lvl 140 running around is stupid, real stupid.

Christian Gottidood September 24, 2017
Overall fun to play with friends. Controls need revision and the UI does too. The chat should be more fleshed out (able to scroll up and down, word wraps and more) to allow for easier role-playing in the game.

Sven Esemann October 4, 2017
The graphic is terrible, I deinstalled game.

Drago fill September 12, 2017
It crashes alot for me but I still like this game

ultimateSugarBoy September 16, 2017
I love this game

TheChiseled Gamer September 9, 2017
The gameplay is really fun and challenging. Progression is relatively slow, so this game isn’t for the faint of heart. It can be relatively agitating in terms of progression, but it reverts back to the challenging aspect. My only problem is a bug in which i can’t load into the login menu. I have a samsung galaxy s8, so hardware shouldn’t be a problem. I would be able to thoroughly enjoy this game more if this was fixed as I’d be able to play it

Japmaicanese ジョン•홋 August 22, 2017
Very off putting to have monsters spawn on your location everywhere you walk. You can’t get to explore the items that never seem to have anything useful in them. Constantly doing battle until you eventually die from the endless spawns on your location.

Laurence Wright August 17, 2017
Great graphics. There were some bugs but they seem to have been fixed recently. If you liked playing fallout, you may like this – it has a similar feel. It does take a while to figure out what’s going on, so I felt rather lost to begin with. It’s worth sticking around though, it’s very rewarding.

Gerard Goddu July 18, 2017
All in all a fun game. If like fallout 1 or 2 give this a try its basically like fallout but online. If there any issues the creators are quick to respond on here. Looking forward to more updates.

Developer DM Studio July 2, 2017 Sorry for this bug. It is fixed already.

Charles Harrison August 1, 2017
Like it a lot needs more work. Main complaint is you cant really tell what you can search for loot and what you cant. Also stacking materials in the inventory please.

Justin Ott September 1, 2017
I’m having a bug where it makes my hud very large large enough where I cannot see the screen I have uninstalled and reinstalled.Please help I have put actual cash into this game as well. *EDIT* I restarted my phone all is well.

Percival August 3, 2017
Seriously Reminds Me Of The Original Fallout Games And The Cancelled Fallout MMO That Was Planned. I Can Tell You Guys Are Fans. Keep Up The Good Work

UnknownAugust 26, 2017
This MMORPG has a huge problem with Player Killers.For once, I would like to see a game where other players couldn’t kill you, just mobs could.

Dan Abernethy August 18, 2017
Great game! Unique and different MMO experience. In the beginning its actually quite challenging but it gets easier so don’t give up. Any Fallout fans would appreciate this.

Developer DM Studio August 17, 2017 Maybe connection is blocked by firewall could you check it from other network?

Grumpy Gamer August 26, 2017
Registration system needs to be fixed. Industry standards are moving towards longer password systems.You need to provide more characters for username. I couldn’t use my regular name. What’s the problem? Why the limit? Cheapos. I ran into registration issues. Of course all names are taken when you only allow 7 or 8 characters. Your loss. I actually spend money on worthwhile games.

Donavin Beswatherick July 27, 2017
Could be a grate game but one problem there’s no way to get out of the starting area 1 was one of dozens of players running around trying to get out and no one was able to figure it out just more and more of those bugs real shame its not simple

J Doge August 26, 2017
This game is really great! I get like a fallout 1 feel from this game and that game was amazing! The controls can use a tad bit more adjustment but i love the game for its pixel like graphics that makes it unique. Also, when you die, i dont like the login screen when i die, maybe put a respawn button instead? Another issue is that enemies chase you for the longest and i wish their radius was decreased. The last problem i have with this game, is that to attack npcs or players the button is extremely small and can be annoying at times and i wish their was a system where if something got hit, you can see the hp points number subtract instead of just depending on the health bar. Im really enjoying the game and looking forward to new updates. Thank you!

ogg sadniggashit August 9, 2017
It would be great to have a tutorial at the beginning of the game or an introduction to the controls of the game. But overall, it’s a good game but needs work on the difficulty.

UnknownJuly 5, 2017
Cool and promising, but the balance is way off.Losing 20% of your xp every time you die is too punishing, so I choose between killing easy enemies (boring) or doing something more interesting and dying more frequently, losing my items and xp (irritating).I’m tired of putting in so much effort to level up for so little reward– all that killing to gain a 2% bonus to dodge or melee?If the best part of this game is joining a faction and building bases, I will be too bored and annoyed to level up enough to join one.There is no guide to crafting, so I have no idea if the stuff I’m storing and carrying is useful.Also, if I were to buy a pet dog with real money and it died, I would uninstall the game.How about if it runs off just before death and reappears healed when you next revive? (You won’t lose sales. It’s not like anyone would buy another dog from you, just to watch it die again.)I would suggest selling access toa section of the map that is off-limits to any player who has ever earned outlaw status.I think people would pay for a morepleasant experience away from spawn killers and chat spammers.This is promising, keep working at it.I’ll check back in a few monthsand see how it’s grown. But in the meantime, I’ll look for a multiplayer game elsewhere.

Eddy Thoman July 5, 2017
Needs tons of work have to tap the screen 90 times to move to a spot moving from area to area is to difficult since you stop at the screens edge and have to continually move up and down to get to next area disconnects constantly and if a lvl 2 can attack me when I’m at lvl 4 with the same weapon I have and kill me it’s bs you lose way to much xp after lvl 3 when you die needs balanced update game is still broken less and less people are playing now you still lose tons of xp when you die it’s not worth playing if you have an actual life outside of games or any kind of job

Amit Maliye August 18, 2017
This could have been a great game but with no tutorial and proper guidelines, you don’t know what to do.Also the community is not very helpful either.

MONOCLE tv August 17, 2017
Loved it reminds me of Fallout 1 and I’m a huge fallout fan and DM studio you’ve hit the spot for mobile games like it thanks a bunch

Jose Hernandez August 31, 2017
Cool game that has a lot of potential along with great GMs and Devs that keep the game interesting and fun. Overall a tremendously Great game.

Jonathan Schilly July 4, 2017
Its a good game little slow to start but it’saddictive

superghoul Fat July 5, 2017
It’s good for the first few days but after a while I got boring.

Top Cat Tstine August 28, 2017
Could you make its so there is a marker where i tap to know where my character is going.

weestlander _567 July 25, 2017
Please fix the controls and the unforgivingness please