This game is off the hook except for the grammar. The button for shooting is for rapid firing and the screen swipe is for accurate shots. So if it was changed to where when you touch the screen it automatically makes the bow draw to the max the adjust accordingly that may be better but I could be wrong. 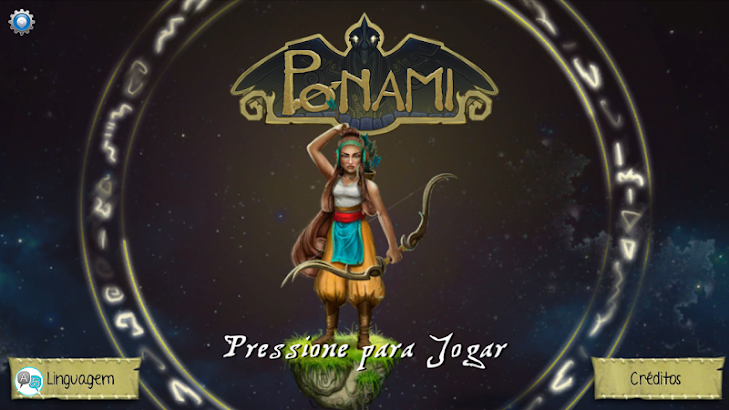 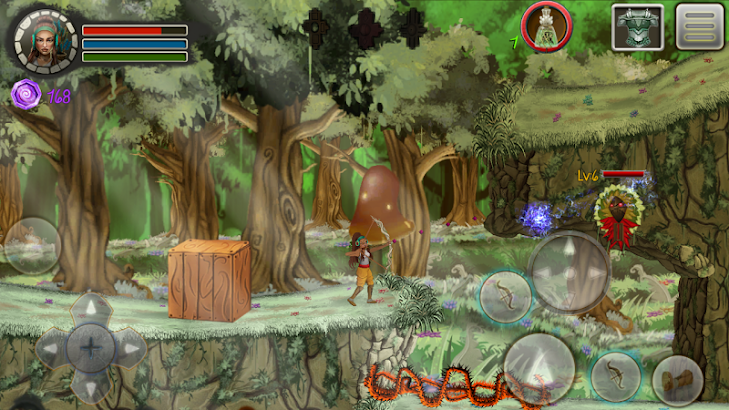 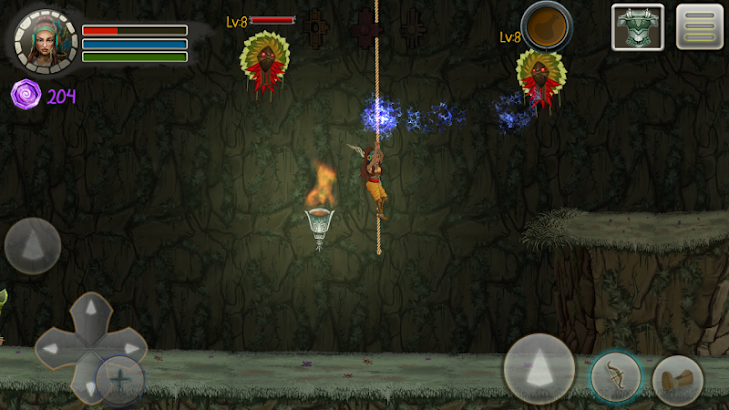 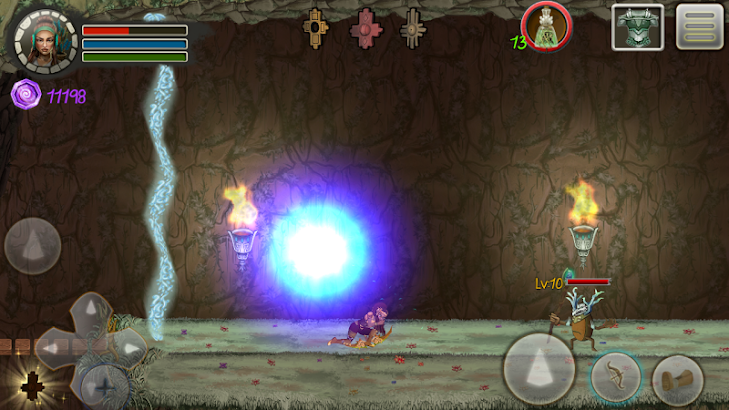 You control a young archer with a precise bow. Its a mixing with platform elements and RPG. Your performance and evolution in the game are acquired when your skills improve as a player through the collection of Items and experiences acquired in the phases.
The game consists in 6 amazing worlds to be explored each with 8 stages, one big boss in each world, one secret temple and unique items in every region.

—– In current version
The first world is available 8 phases plus a secret Temple and 23 items is available.

—– Introduction
Ponami is a 19 year old girl who leaves her village (Sajor) searching for answers about an evil that has always accompanied her existence. With the initiative of facing Her fears, she decides to leave her house and follow the tracks of the Sajor Mountain’s. Play and discover one of the bests and exciting inde games, full of discoveries!

—–Description
Game made by fans of 90s videogames, with a progressive difficulty where it takes time of game to get used to the advanced phases. The gameplay is unique, where the bow is controlled by a virtual joystick. Incredible, beautiful and inspiring graphics (HD) with unique themes to each world. The soundtrack is enchanting and promotes the immersion of the player in the environment of each stage.

Trent Schoen May 16, 2017
This game is off the hook except for the grammar. The button for shooting is for rapid firing and the screen swipe is for accurate shots. So if it was changed to where when you touch the screen it automatically makes the bow draw to the max the adjust accordingly that may be better but I could be wrong.

Janine Warrick July 26, 2017
Im on the first level and the next has said coming soon. Its only been less than an hour. But it feeeels like forever and a day. Im trying to get game play in while the babies are napping. What do i do now? Love the app btw

Tony Chamoles March 28, 2017
Well worth the download, no shadow of a doubt. Aiming with the bow feels a little weird though, hope you guys look into it again and come up with a more stable thing. The one big detail I do wanna complain about is the English translation: as an English teacher myself, I find the grammar errors way too damn critical: people from English-speaking countries are gonna laugh at this, since these are children-level mistakes. I haven’t checked the Portuguese version for stuff like this but, if you expect “gringos” to buy the fish you’re selling, then this is something you seriously wanna redo. That being set aside, the game as a whole is super cool.

Developer JOGOS AURORA March 28, 2017 Hello, sorry for our mistakes.
We really care about these issues, but we are currently out of resources. In July we will update the game, correcting as much as we can of English. Thank you very much for the rating.

Ian Sean Montgomery October 8, 2017
The bow controls are amazing, it is like angry birds in an action RPG!Definitely charge somewhere from $2-3 (US) for each new world. Let people play Sajor for free, then after that, they had better make it worth your effort!

Peter malik March 31, 2017
Very well done. I’m waiting for the next episode Indorur Desert. Got all I should get. About the bow it would be easier if it worked also from the left side, not only the right. Thanks and suggest you do more marketing and continue to develop more games like this one valuing more the folkloric histories.

alan prout August 29, 2017
complete waste of time. The game starts out fine but only has one world done and the rest is coming soon. Don’t bother.

UnknownAugust 27, 2017
The only problem is I can’t continue from level 2 and whenever you are asked makesure you answer in English how every one can understand.

LEKSHMI V July 3, 2017
I play first level and T-1 completed. But I cannot go to Indore desert… It’s show coming soon…. How can I play indore desert… Please any one help me…. I am very interested to play this game

Jaimin Parekh August 26, 2017
Don’t like due to waiting and waste time to wait for next level why you are made this game if u have no more level .. game maker think about review of people but they do not take any action for next level. So pls turn of this game.

Terri Morrison Adams July 15, 2017
First level I finished and got me hooked.Now 2nd level just says coming soon.I see others have the same problem and see no response in how to open it up. Please fix.

Jennifer Poorman July 12, 2017
This game is very very addicting and I love it ! But I do wish that I could get to the next island area on the map other wise I’m stuck. So please update it soon please!

David Hendricks May 25, 2017
Great adventure game… The only problem is the delay of weapon and control buttons are too close together. Other than that, good job.

katie James July 28, 2017
Love this game,finished the first level but all I keep getting is next level coming soon.can somebody tell me how to get to the next level or can I be told with it’s going to be updated

UnknownSeptember 27, 2017
Great game just need the update so I can play level 2 and the rest of the game. Best game I have played in a while that doesn’t require Wi-Fi

sahil kumar August 4, 2017
You will not be able to use your arrows when u need it the most! It will not give you option to hit flying enemies.

Muhammad Ghias September 28, 2017
Interesting game but when will come new levels , just one stage with eight parts and I have been finished these ones. I am waiting for new levels , how much I need to wait for new levels plz ?????

Sindhu Sindhu October 6, 2017
Hello .i love this game. But i will finish the first level . next coming soon but not open y.anybody say something pls rply to tamil language

Delightfully Lovely October 18, 2017
Great Game wasn’t bothered by the “critical Grammer errors” in any way like one mentioned in a previous review that we would be.. Nice of you to create Ponami letting Gamers try the game out was killer of you. And if you decide to, yes it does need levels finished whenever you can take time out to do so..

Leigh Shuttleworth August 12, 2017
Brilliant game ! Definitely in my top 10 and considering I’ve played 100s of game apps that’s some accalad !! Please do the other levels ASAP.

Rameen NoOr May 9, 2017
Probably one of the best games on playstore so far!Can’t wait to play the next episode Indorur Desert,please update ASAP

Kim Stone May 30, 2017
Absolutely adore this game. Took some time to get the hang of the controls but the secrets and the bawait ttles are the best. Cant wait for the July update. Would even pay to help developer.

Яίτζ August 11, 2017
When will they develop the next and onward chapter, I just can’t wait to see what they have planned.

Apollo Ong July 26, 2017
I’d enjoyed playing it when I then realized that there’s no Indorur Desert. Coming is prompted on it.?

Ratna Sandru July 23, 2017
Stupid game with no instruction….with one box have to jump the path impossible to play…and very boring.

Maaro Khan August 7, 2017
Please open the second island please will u open the secnd island ? Bcz i have cmpleted the first one reply plz am waiting but in english i can’t understnd other language excpt united kingdom

UnknownJune 14, 2017
It’s an unexpected adventure but I don’t like the idea of “Coming soon” thing .

nicolaas maritz August 22, 2017
Thanks for the great game and I have a problem with the next level can’t get in coming soon thanks again

Jagdish Dubey June 23, 2017
Its Awesome…i have cleared all stages now waiting for next land…pl upload…

Sand King July 3, 2017
Marina, I love you for making the art for this game. Xoxoxo

Kiara Winget June 8, 2017
Sometime its not do that what I want to do for save me.from the creatures .

bcjnk May 31, 2017
Could be a good game but it’s let down by the bow and arrow aiming mechanism
Tags
JOGOS AURORA