Greatly fun. Very addicting Loads of fun. I absolutely love it. The only problem i am having is the screen freezes up on me quite a bit while I’m playing. I also think you should be able to purchase more staff with regular cash and be able to upgrade chairs in waiting area with regular cash instead of priest points. Other than just is GREAT. 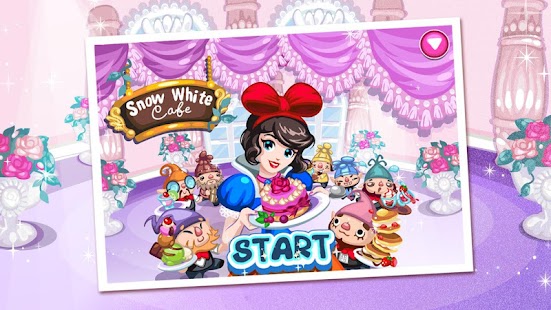 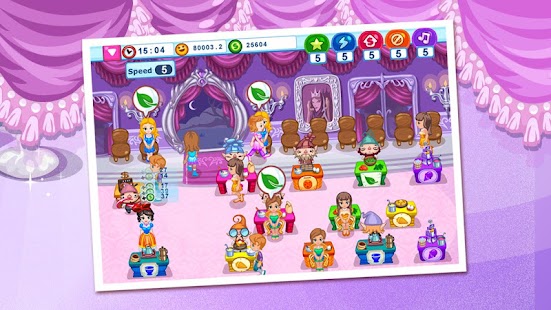 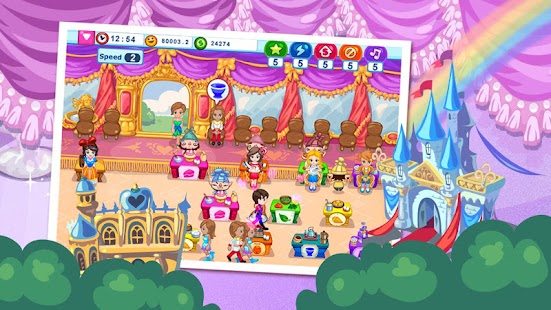 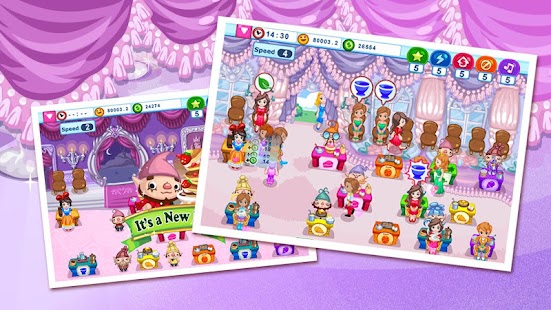 shawnna ramon August 20, 2013
Loads of fun. I absolutely love it. The only problem i am having is the screen freezes up on me quite a bit while I’m playing. I also think you should be able to purchase more staff with regular cash and be able to upgrade chairs in waiting area with regular cash instead of priest points. Other than just is GREAT.

Tina Bailey April 14, 2013
This is a great game, love it but you need loads of pink crystals and never have many but you get loads of money and nothing to spend it on, shame there isn’t a converter to change maybe a 100000 money into say 5 pink crystals but there isn’t or have more upgrades that cost money or crystals.Just another game that wants you to spend a lot of money.

Catherine Alexander April 10, 2013
Loved the game and the speed in which you have to play but it kept freezing and even if I closed it under Task Manager the music would keep playing and I would have to restart my phone. Major pain!

Tiffany Beeson July 16, 2013
I used to play Cindarella cafe. Same exact food and everything. But this game blows it out the water. Each level u get free diamonds and 3 spins to win stuff. Downfall is chairs ect cost diamonds instead of coins. I wish more could be bought with coins..i have millions and nothing to spend them on. Still an awesome game tho !

MisfitK Horror Queen January 5, 2016
Everything works on the app, with the exception of purchasing coins & gems. I have not had this issue with any other app. Would like to purchase a bundle to advance even further in the game. Please look into this & correct asap.

Natascha White September 8, 2013
I loved playing this game. I was at the last level, so I deleted the data to start from scratch, and ever since then it won’t open anymore – “Unfortunately, Snow White Cafe has stopped.” Un- and re-installing or restarting the phone won’t help.

Chastity Barruel May 26, 2013
Great game too occupy my time when I’m bored. Just wish there were more options for when you’ve maxed out on cash rather than having to buy things with only diamonds to upgrade.

Steven Rudd May 18, 2013
This is a very fun game to play. The only thing wrong is needing diamonds to buy things with most of the time, and they don’t accumulate very quick at all. You do have a chance to buy things with the cash you have won, but not many. I have over 6 million in cash, but it isn’t doing me any good just sitting there. They need to make a way to be able to buy diamonds with the cash you have won, or let you pay with cash insteadof diamonds.

Pamela Harrison May 9, 2013
This is an excallent game verry challanging and you can get diamonds as rewards if you are fast enough to tap them before they are gone but be ware if you buy diamonds or coins and change devices you have to start all over because your game dosnt come with you like most other games.

tete nono April 10, 2013
Im amazed i find myself as old as I am playing this game. I like the challenege at higher levels. Id recommend bringing down the price of snow white, though. Shes a bit too pricey. So for now, 4 stars.

billy komara June 2, 2013
I don’t get bored at all with this game. All 7 dwarfs are cute & adorable! Only one thing, maybe player can rearrange the tables? Thank you ?

R Carver July 15, 2014
I love the game for downtime; however, i dont understand why we earn money when you cant buy anything with it. Should earn more diamonds or slot coins instead or add stuff to buy with the money. Everything takes only diamonds. Other than that its not a bad game to enjoy.

Jennifer Reed July 16, 2013
I love this game. Id play it all the time but for some reason, after one game my phone crashes and if i close the app the music keep playing in the background and i have to turn my phone off? Any suggestions?

Marcella Walker July 4, 2013
I was having tons of fun with this game and the challenges until ads started interrupting me. Also can you find more things to buy with coins? I’m a millionaire and getting bored!

Ashlee Schaal June 17, 2013
Game keeps freezing and I continuously have to restart it. It is a fun game when it works so it needs fixed. If I could right now I would give this game a negative score

Desiree Vazquez May 28, 2014
This is the best cafe game that I’ve run in to you can play andlevel up without having to pay or wait for a very long time to earn coins or special points it’s awesome i don’t get tire of playing.SO if you like rest.serving game this is the one. I know it’s very easy but it kills time.

Christa Waulk June 30, 2013
I love the game but out gets extremely challenging n then everything cost diamonds, u hve to have 25 to buy the potions for them to help, n 90 just to buy an extra chair, n only get 4 or 5 per round u play, other then that i love it

Linda Lewis April 15, 2013
Didn’t really want another game added so to get items for another game, but I’m glad I did coz I love it!

Ana Ramos April 23, 2013
I LOVE IT I RECOMEND IT TO ALL AGES LOVE IT SO FUN AND COOLTHE PROBLEM IS THAT THEY DONT GET UR FREE DIMONDA PLS FIX IT

ijaz f April 16, 2013
It. Is. Simply. So. So. So. Sooooooooo. Cute and fun to play. Everyone should play it. It is soooo much fun. But why oh why do we have to pay soo much fir snow white. Why cudnt she be there in the beginning and her upgrade cud be costly ?

Chelsey Weaver June 24, 2013
I love this game so much, it’s much smoother and better then hello kitty cafe. You just have to try it, trust me you will looooooove it!!!! I am so addicted, can’t stop playing it!!! Hours and hour of entertainment and sooooooo much fun!!!!

Jess Pelshaw April 22, 2013
This is my favorite game!! Very fast paced and challenging! Much better that HelloKitty Cafe. Much smoother game play and way less glitches. U gotta try it! If u like games like diner dash, you’ll love this game!

Angeliah Bansiles-Ibos April 9, 2013
ooooh its soooo much fun its adorable. i only mad that snow white cost so much and why do we have to pay for her if its called SNOW WHITE cafe. but its still fun and good to play

Leashy Hearts June 9, 2013
I use to love this game is so cute and I love that u can earn diamonds instead of paying for them I’ve been collecting my diamonds forever to get snow white I only need 10 more!!! But the game won’t open im so sad please fix it!!!!!!

jules hermanto April 17, 2013
In the middle of the game,app will suddenly freeze and have to start all over again. Now it won’t even open on my samsung galaxy s 2.

Alex Baker April 19, 2013
I love this game! So addicted! Wish I got more gems but whatever, Its cool. I get into the zone playing this haha love it ?

April 18, 2013
Finally a game I haven’t gotten bored with after a day or 2. Great game, colorful graphics, great setup.

Christine Dacanay April 11, 2013
So addictive!I so love the game..but snow white is expensive .. too bad! ?

April 15, 2013
I love how its snow white themed. I love how its all cute and colorful and the adrenaline rush is Awesome. It was love at first click <3

Alia Reese April 7, 2013
It’s a good game for young girls and fans of the Diner Dash series. Any girl who loves princesses will adore this game.

Stacy Dankanich April 30, 2013
Love it I could play this non stop only miss hap is I have all this cash and can’t use it until I buy diamonds but other then that it’s by far one of the best apps I played so far..

Amber Cremer May 9, 2013
Gets difficult after a while, but can still be played without getting frustrated. Time management type game.

Tina Griffin April 13, 2013
Its ok it passes the time on a day that your bored . but what I don’t like is that I saved up enough diamond’s to buy a daft and now the only way I can use him is if I level him up which is going to take another 50 diamond

Amy Yau April 12, 2013
I love it very much and it is almost perfect. Everytime it just jam in the middle of game & the music keep on playing. I need to switch off & on my mobile phoneto restart again. Please fix it. Thanks

Erlinda Malapitan April 13, 2013
Me and my daughter. Charigold loves playing this kind of game. And this is our Fave game to both of us. That’s why I rated a perfect and awesome five stars to all of the Creator of this game. ?

Hayley Nelson April 14, 2013
Very addicting, sometimes gets glitchy, but not enough to uninstall!

Visit the most fabulous hangout in the land of fairy tales! Help the Seven Dwarfs run a busy café where princes and princesses from all over Fairyland come for a truly magical experience! Meet magical creatures, princess and princesses and many other folk from Fairyland.

When the Seven Dwarfs decided to take a break from mining they had no idea that catering would be such back-breaking hard work! It’s up to you to help the Seven Dwarfs run the most magical catering in the entire enchanted kingdom! Inspired by the fairy tale written by the Brothers Grimm who also penned Sleeping Beauty and Rapunzel amongst other famous childrens work.

Have a wonderful adventure with the Seven Dwarfs! Train the hardworking dwarfs and upgrade equipment and furniture to serve more customers and earn more coins! Challenge yourself in 9 unique stages to complete all missions and achievements!

Is your café magical enough? Prepare to be visited by various celebrities from the enchanted kingdom including Cinderella, Beauty, Rapunzel, and other wonderful characters straight out of a fairy tale!

Features:
Adorable graphics, fit for royalty!
Classic time management gameplay
Purchase upgrades for your café to serve more customers more quickly
Train hardworking dwarfs to run the café
Includes 9 unique and exciting stages that will test your speed and strategy
Replay previous stages to complete all missions and achievements
Get a visit from Very Important Princes and Princesses from all over Fairyland and earn bonus coins!

** Please note that while the app is free, please be aware that it contains paid content for real money that can be purchased upon users’ wish to enhance their gaming experience.You may control in-app purchases made within this app using password protection which can be enabled from the setting page of the Google Play Store app. **