Starswirl Academy is a visual novel, like a choose-your-own-adventure story,

Game breaking save glitch. This game has already made a good impression with me, and I can’t wait for the full release. I only have one issue. Around the time where I meet Polly for the first time, when I try to save the game, I get an error screen, and my only option is to close the app. When I go back into the app, that save data is not there, and I have to play from the save before the crash-save. Hopefully this can be patched, since I am in love with this game so far! 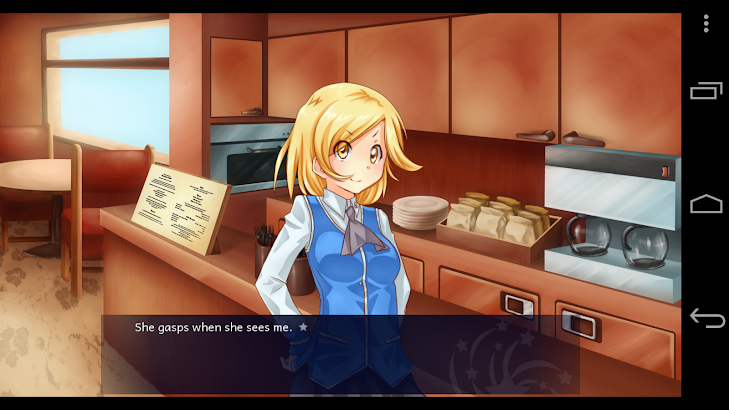 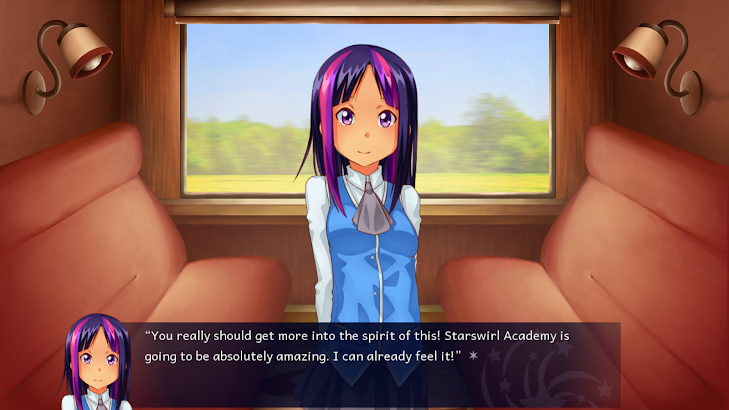 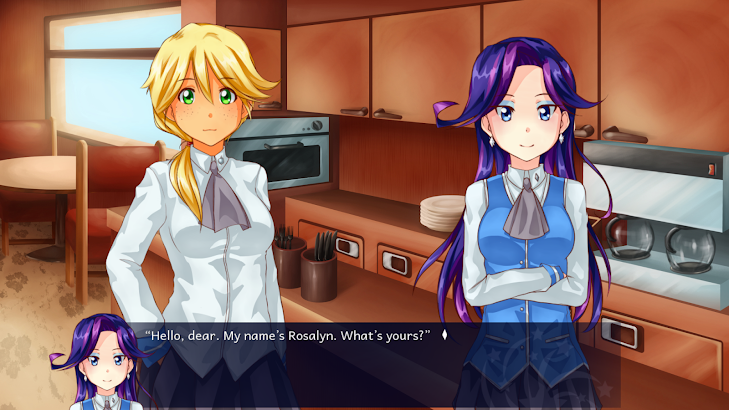 “Welcome to Starswirl Academy: one of the most prestigious high schools in the country. Classes and extracurricular activities cater to the needs of each individual student. At Starswirl, we feel that an emphasis on a person’s special talent is what sets us apart from the rest. While enrolled, the use of the campus’ facilities is not only allowed, but encouraged to aid in the pursuit of honing your own skills.”

This is a “visual novel”. It’s similar to a choose-your-own-adventure story, however there are no choices in the demo so it plays like a very intricate picture book. You’ll join Tom and Tai on their first day of school and meet some of the supporting characters around campus.

Michael Gilmore November 5, 2014
This game has already made a good impression with me, and I can’t wait for the full release. I only have one issue. Around the time where I meet Polly for the first time, when I try to save the game, I get an error screen, and my only option is to close the app. When I go back into the app, that save data is not there, and I have to play from the save before the crash-save. Hopefully this can be patched, since I am in love with this game so far!

Music Dash April 22, 2016
But!! I think there is some things missing to be really finished… like a character chart to create our own character, choosing which girl will our character like more or less, animations (more animations than cut images…) and finally, a button to have a sort of “behind the scene sketch and cut scenes…” what do you think about those ideas??

Kaho X April 5, 2014
I, actually really liked this.Art was top notch, and the writing was very enjoyable.The only quip I might have is that the buttons in the menu don’t show whether they are toggled or not.But beside that minor thing(which is probably because this is a demo test anyways), great job.I’ll be keeping my eye on this.

UnknownFebruary 1, 2014
I had a reboot when I tried to press the hardware menu key on my phone, and as you said already, there are no modifications for small screens, but even if it was just OK on mine (Huawei G510), I own an other phone (Samsung Galaxy Y) and this one won’t be able to display everything. Anyways, thanks a lot for porting it to mobile devices!

Kiyochii Hosokaowa November 10, 2015
“Looking forward to the full game/next update.” Is what I said so long ago. And after reading you had an update coming soon? All I can say now… Is I can’t wait to return. Hope to see everyone again soon.

James Bronie December 27, 2016
At first I thought I wouldn’t like it, my being very particular about my fan items,but I was pleasantly surprised.It was we’ll made and clever; much deserving of this rating, keep up the great work.

Juan Naibaho January 20, 2016
Good i will be waiting for full version , there is bug in scene in headmaster room … if i click the multi task manager on my samsunggalaxy A8 and back to the game again , in the screen appear a word say error accouredand there is option to roll back to the step before it and thereare another option but i dont remember .. fix it before full version made.

Prophetic Prose February 23, 2014
I’ve been waiting to be able to get this, and it didn’t disappoint! Kind of a shame that the character names had to be changed (goddammit, Hasbro), but I’m still really happy this demo is out, and I’m beyond pumped for the full version to be released. Also, I applied to be a writer for this project, and I really hope I make it because this is shaping up to be something amazing! Keep up the awesome work! ?

CottonCandyCake VA February 10, 2015
I’m just saying. I want this badly, but I don’t expect spot on voices. Heck, I’ll even do the voices! ?

Giovanni Auditore July 30, 2015
It got me hooked into it can’t wait to have the full game. The transition is a bit slow but it’s okay.

Regina Perlita April 2, 2014
I can’t play it, after the warning its just turn become a black screen

Serebyi Mun August 8, 2014
So, I guess it doesn’t work on Androids, which is what I had before. And now that I can play it, I love it! And I see what you did there, with the names. Keep up the good work

Syi Fyi October 9, 2017
It’s just alot of reading right now, not really any real story yet. Hopefully it will get better and you will actually get to interact with the characters and choose things for yourself but until then it’s kind if Blah. If that will be an option in the future I would suggest giving the player a little bit of a chance to make small decisions before long moments of dialogue, which there are alot of. As it stands not very entertaining. Sure there will be improvements in the future

John Aldag April 13, 2015
Amazing. Personalities were down pat. Characters were similar enough to the show to be easily recognizable, including names. Good story line so far. Cannot wait for the finished version. Will buy instantly. Perhaps in full version, we can pick different character story lines to follow, like each character has there own story.

Taylor Dansie November 29, 2014
The writing, art and interface are all absolutely wonderful! I haven’t felt this excited about a visual novel since I played katawa shojou and this is just the demo! Will definitely play the full version when it becomes available.

Jaxin Elliott March 27, 2015
Question though, The description says that we can expect an update soon. Can you give an estimated date or just say around when it will be released.

Developer Rosin Entertainment April 1, 2015 Yes. There is a second PC demo, but we’re having some issues bringing it to Android. It’s coming, but if you can’t wait. Check out the main site. http://rosin.moe/

Toby theme July 24, 2014
mlp based characters plus visual novel style this is really good I also have this in the pc. Can’t wait for the full version :Dand here’s some brohoof for you guys! /)(

Angel Slushtrap Teixeira January 9, 2016
Its mlp look at it next in the period!it has diamond Rarity cutie mark,apple AJ cutie mark,star twilight cutie mark and ballon pinkie pie cutiemark.Im going to see if there is Rainbow dash or fluttershy

Scott Klemann October 15, 2017
I want to try it out, but it won’t open on my Samsung Galaxy S7. Sometimes it’ll say “could not extract private data” tried uninstalling and reinstalling but that didn’t work and it is allowed storage permissions, all it asks for in the app manager.

AnimeFanLT July 19, 2014
For a beta it’s pretty good though I can’t wait until the full version to come out, but I’m sure it’ll come out eventually ?

sonofsueraf June 7, 2015
I’d give 5 stars if this has a menu where you can save and load like on pc…or if you want another save check. I know this is still in beta so this is just a suggestion. Looking forward for its final product.

Latton Luttrell November 3, 2014
I wanna throw so much money at you for this when it comes out.Outstanding job so far.

Fenix July 2, 2014
This is shaping up to be a pretty good novel and I love the subtle reference with those silver pins. Keep up the good work.

TheEndless6 January 31, 2014
Amazing loved it on the PC loved it on my phone. Can not wait for the finished product.

Nosebleed February 10, 2014
Though it’s only a demo as of yet the artwork is great. It has a lot of room for improvement but i can see this becoming a big hit in the fandom.

Tasha Moon March 13, 2014
I loved the artwork, the music, the story. I see a lot of potential for the storyline and character development. There are a few technical bugs, but that’s to be expected in a beta version. Good work!!

Juvia Lockser June 10, 2014
I luv it I want the full version I dont want to pay for it tho if it’s already out tell me if it isn’t tell me when it comes out dont make peeps pay for itI never get the games that u have to pay for and THIS IS THE BEST APP….GAME…..I DONT KNOW WHAT THIS IS BUTS ITS INTERESTING GET IT AND MAYBE ULL LOVE IT LIKE ME I NEEEEEEEEEEEEEEEEEEEEEEEDDDDD THE FULL VERSION MY FAV CHARACTER IS POLLY PARKS,tai needs to watch here mo mouth she said hell jk I dont count that as a bad word

Fetal Satan February 2, 2014
I really enjoyed reading this demo, the way the characters are portrayed and the music along with the background images are amazing so far and I can’t wait for a version where I can begin making choices.

Raphael U-Ray July 1, 2015
When the full version came out, do i need to pay to download it?

ElfensFinest December 30, 2014
This was an awesome game and in really liked it. Some of the best graphics I have ever seen hope the full version is out soon

Developer Rosin Entertainment February 1, 2014 A few people have been asking about the filesize. The problem is that the artwork alone is massive. Every high-resolution asset was included so that it looks just as good on android as it does on the PC. Most other apps don’t include hundreds of 1440p images.

Fred Villasenor November 4, 2014
I really enjoyed the demo, I can’t wait for the finished product. I am a huge fan of visual novels and dating sims.And this one simply amazing.

Jorge Fong January 31, 2014
Loved it when I played it on my PC now extremely happy that it’s on my mobile. Can’t wait till the team finishes this visual novel

Woot July 29, 2017
;0; some of the girls resemble mlp. characters Anyway I love the game, it’s fast-working and a good storyline. I’ll keep playing this

aml0797 March 4, 2014
On the PC it loads fine but trying to load it on my phone just ends up with a suspended black screen.

Entinu Ringel June 25, 2015
For those not too familiar with the characters, it’s an alternate universe, humanized My Little Pony game.
Tags
Rosin Entertainment