Clicker game with a collection of different ores and upgrades.

Unrealized potential This game is fun. The pixel art style is great. The unfortunate part is that it’s unbalanced. The longer you play, the longer it takes to improve. Basically, if you want to progress in the game, you MUST do so manually, which defeats the purpose of an idle game. On the bright side, I don’t think it would take much to improve the game significantly. Being able to upgrade click power and fixing the upgrade cost: effect ratio would be two big ones. Since it’s pretty newI hope it gets fixed sometime soon. 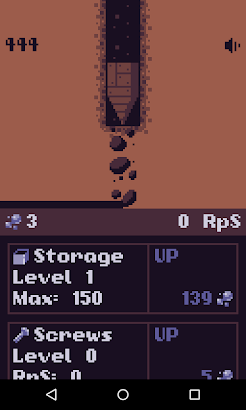 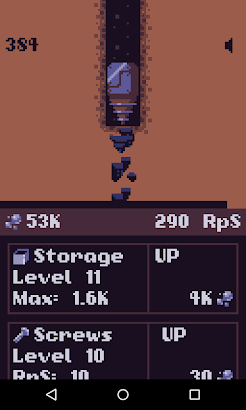 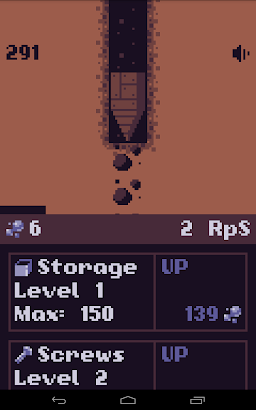 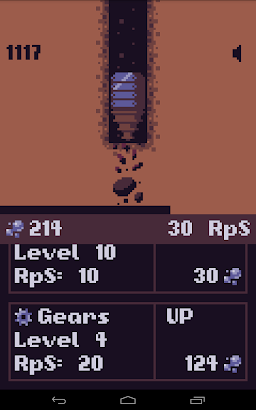 Tap to mine through different ores and use their matter to upgrade your drill. This clicker game features several upgradeable miner parts to make your clicker drill mine faster, and different ores to tap through.

The clicker mechanic in Tapmine Clicker lets you tap the screen to put your drill to work. After manually mining for some time you’ll be able to make the clicker drill mine by itself through the use of upgrades, automating some of your taps.

Tapping also changes the drill’s look! Can you unlock the golden drill?

Lexus van Es December 30, 2016
This game is fun. The pixel art style is great. The unfortunate part is that it’s unbalanced. The longer you play, the longer it takes to improve. Basically, if you want to progress in the game, you MUST do so manually, which defeats the purpose of an idle game. On the bright side, I don’t think it would take much to improve the game significantly. Being able to upgrade click power and fixing the upgrade cost: effect ratio would be two big ones. Since it’s pretty newI hope it gets fixed sometime soon.

Tamra Nacker December 21, 2016
There’s very little content, and progress is slow the whole way. Upgrading the drill requires that you tap. My latest milestone needs 5000+ taps! Increases to off-screen gains cost way too much. Ex: It costs 12K to get an extra 200 off-screen. Which you can gain in literally a second, so your inventory fills in less than a minute, so off-screen idling is impossible.

Terrance Stapleton August 11, 2017
Its 8 bit style. So it’s ok the way it is for now there’s no way to minimize the upgrade panel and for whatever reason the sound went out on top of that there’s no bmg so it’s a very quiet game

Andrew Hastie March 4, 2017
Its an good game but can you add like different drills buy buying them(not in real money) and add like gold and diamond and make a map so you can travelled different areas

msham2002 May 20, 2017
This game is really fun, but today for whatever reason it decided to reset all of my progress. I am really unhappy.

Naana Somiah December 28, 2016
I really enjoy the game but the drill doesn’t show! Are you planning to fix this? Thanks ?

Crystal Miller January 7, 2017
At the start of the game it is really slow upgrading at the start

TheGaming Dude May 16, 2017
There was this glitch when it can just spam your finger taps ?

freddy plays games and reactions February 17, 2017
You can’t even start the ####### game worst game ever like if you agree

AlexTackaberry May 27, 2017
Great game so far but…theres no drill on my screen. It doesnt load at all

Hon Crane February 2, 2017
Everything needs fix I couldn’t even play it at all

Monster Pasta August 6, 2017
Ilove retro games, but, I realized that there was missed potential.

Yotetsu Takamori August 20, 2016
I got my storage up to level 40 or so, come to find out that my storage costs over 200k to upgrade but only holds 3k. Makes offline virtually pointless. Please fix and I’ll consider a better review

chris welch July 7, 2016
Atleast other tap miner apps have many things to do, this is very basic and VERY straight forward… too repetitivewithout much change at all with the gameplay or UI. much left to be wanted from this title. Especiallynot being able to connect to ggogle play or get achievement/leaderboards…

BRIX BOSTON May 28, 2016
I am diggin a hole are you digging holes? The one only reason why Im digging a hole is to be 50pm the same time in a hole diggin and i can’t find MAGMA! THE BEST WAY TO GET THE BEST LAYER IS BUYING THE TICKETSTO MAKE A DRILL!Sorry i freaked out a bit…I think those that say about it , Like me…)`:(sad face) so get the DRILL NOW!

Joe Mitchell July 30, 2016
Glitches after 30 rps. No save function, airplane mode breaks the game, so you can never go offline. Try harder and this might be an interesting game someday.

Jordan Peckham August 9, 2017
There was never any drill on the screen from the beginning. Anyways, the price to upgrade storage is utterly ridiculous compared to the amount it stores. And at a certain point the Rps just stops increasing fast enough to be entertaining.

Tmac McCready September 26, 2016
After quitting and reloading the game, my rps went from actually being 32k to saying 32k but actually giving 4k or so. What the heck? I had to stop because the game was unplayable past this point

Epikcreeper 10 July 10, 2016
You need to add a warning to when ads are going to show up like a countown from 3 or something, yoy NEED that im always clicking on the ads and its very annoying( 3.5 stars )

Eduard Vernovsky May 31, 2016
When i reached like 50 rps it started glitching out like the rps would be 30 for 3 times and 0 or 1 or 2 etc whatever but it would go slow fast slow fast! Please fix or i will make 1 star and uninstall

Brandon Osborn July 19, 2016
Your ads pop up and take up the entire screen every couple of seconds so you inadvertently tap it. Then trying to back out locks up the application. Uninstalling it now.