Defend your fortress against hordes of enemies and march towards the Dark Tree! 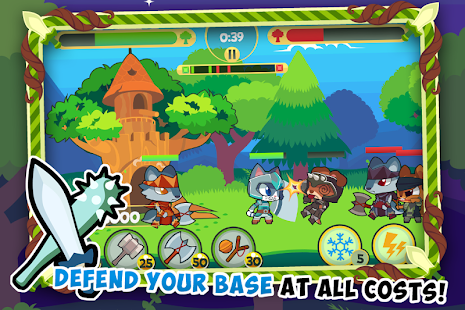 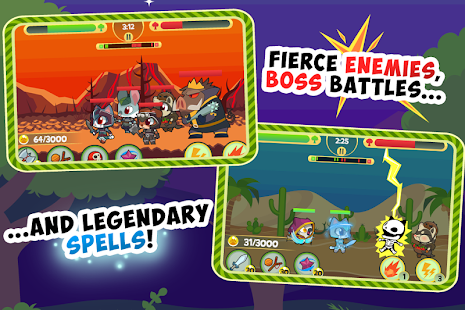 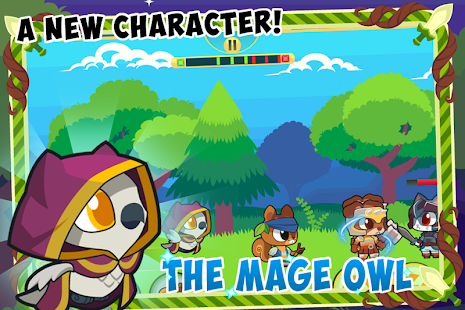 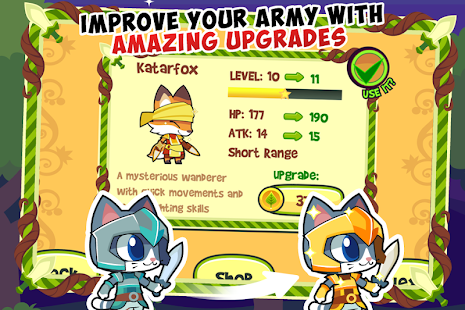 TrueVegeta1 April 29, 2017
Great game so far but have noticed the levels remain at a high difficultly even if you go back and all the animals are so expensive, luckily the in app purchases are really cheap but grinding in game just seems really difficult, otherwise its definitely worth 5 stars and one ill keep for a while

Gerome Draydon December 17, 2016
Sometimes when the squirrel shoots the hit doesn’t land but glides past them and hits nothing

John Rodriguez August 9, 2016
The first thing I did when I saw this game is click it cuz I LOVE CATS AND WOLVES AND ANIMALS AND TREES I think I have a problem….

Zen Furry October 13, 2016
I feel this game could be a lot better with more creative enemies rather than a lazy recolor of the main characters, otherwise it’s ok

Joanne Walden March 17, 2017
I love this its so fun addictive and adorable! And weather you are toddler a kid or a adult I am sure you will find this game awesome!

Not So Pro Gamer January 18, 2017
The game is great, but right now their is a glitch, when the squirrels shoot, it sometimes does no damage and goes passed the enemy or the tree, plz fix that.

PLRogers815 August 19, 2017
It’s great but I have encountered my fair share of glitches one that ALWAYS happens though is that sometimes, randomly, any unit who fires’ a bullet goes past the enemy and base without doing any damage and when this happens the opposing team’s units do the same, which COULD mean an unfair advantage if you like using short ranged units, but I just find this annoying please look into fixing it. I understand that not every game can be perfect but this is an annoying bug so, again, PLEASE fix it

Howard Nelson August 31, 2017
My brother has this bug on his that the long range animals Shoot And It Always Misses. I don’t have that problem.I Enjoy This Game almost as much as my brother does. I Wish this game had more features.My favorite Units are the Katarfox and the mage owl.

Wubasuarus Rex July 27, 2016
The level of generosity to make such a great game free has to be enormous. Thank you so much!

Gonzalo Warner September 22, 2016
This game is very fun and I found a strategy to defeat level three.

kaitlin kitten August 27, 2016
Its amazing how i love nature and its like they made the game for nature people like me ??????

October 14, 2016
im an easily get bored person when it comes to games but this is something good job

penguinman Bingham June 22, 2016
The game is fun but you should add more people

Gabriel Rivera May 31, 2016
The squirrel doesn’t work for me

Loh Ren June 6, 2017
Its alright but the time it takes to recharge is too long. Its an awesome game though!?

Suicide Kill August 20, 2017
I wish u could add slot more Hero’s and spells also this could have some type of online gameplay to it thanks plz add

Janelle Hudson March 20, 2017
Really good and it has cat warriors in it so it is even better!

Kelley Kaiser January 5, 2017
Great game the owl was the best for me it helped a lot lol

Jakkrapun H November 2, 2016
I dont believe that i can be addicted by this game lol

Jarrad The Gamer June 20, 2017
Like omg the graphics are so awesome this game is so good who ever made this game thank u

Marixa Calderon October 11, 2017
I loved this game! I’m a fan of anything medieval and the adaptation to animals was great!

Maintenance update!
Don’t forget to give a new rating or comment, it helps us a lot!
Thank you for playing!

Defend your castle against hordes of enemies surging forward to bring down your empire! Use strategy and take command of your soldiers to protect your kingdom from the enemy army. Tree Fortress 2 is a challenging and addictive defense of the tower style game. Play now!
Your army of very skilled animals are just waiting for your command to take position and march against the dark tree. Each character has unique abilities and it’s up to you to choose the right soldiers for the battles. Will you succeed in your endeavors?
Cats, dogs, rabbits, wolves, bears, ferrets, foxes, owls and parrots are all ready to take their places
This sequel of the original Tree Fortress game brings all the excitement of the first version plus amazing new challenges, characters, abilities and features. If you’ve played Tree Fortress before, you’ll love it. If you are a new warrior, get ready for a great adventure!
Join the fight in Tree Fortress 2!
HIGHLIGHTS
• 10 different characters to choose from
• Fight against dark enemies and bosses
• 60 challenging levels
• Amazing scenarios: Forest, Desert, Iceland and Vulcan
• Upgrades, golden warriors and powerful weapons
• 6 special magic powers
Please note! This game is free to play, but it contains items that can be purchased for real money. Some features and extras mentioned in the description may also have to be purchased for real money.