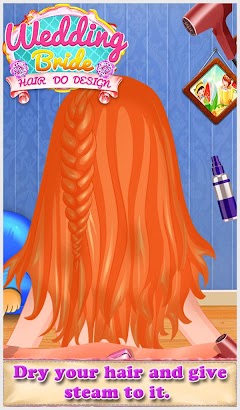 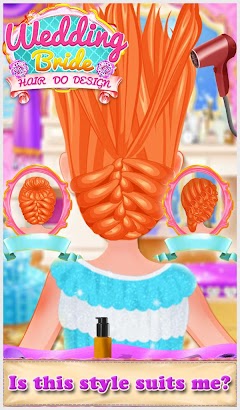 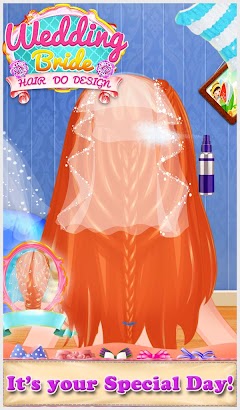 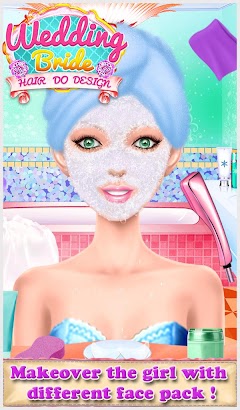 Finally! The big has arrived the whole kingdom is dancing with joy; the castle is decorated with candles and flags. Princess wants to look best for this big day.
Would you help those princesses to get perfect hairstyle and makeover?

Start with a soothing spa treatment to make sure her hair and skin is clean and clear. Select from masks and scrubs that you can apply. These magical masks will give her the glowing sparkling look that a princess needs.

Then finally come to hair style. Select from various hairstyles that you can apply. Complete her hairstyle as per instructions given.

Download this girls game & grab this opportunity be the fashionist of the princess to assist her on her big day.

Skyla Gaming November 12, 2015
I can only put soap on her face and wash it off. I can’t do anything else!

Haley Waggoner November 3, 2015
HATE IT.I mean how does this game even work I TOTALLY HATE IT.

Robyn Doerrer December 16, 2015
IT WILL NOT LET ME GOT TO THE NEXT PAGE I WILL RATE IT FIVE IF YOU FIX IT

Laura Harris October 24, 2015
Like the idea of the game but it the buttons dont work. I was not able to complete one hair style

Jalajia Sashington November 7, 2015
When I got done plucking the eyebrows when I try to press the button it wouldnt let me if you fix the buttons they know rate higher

choke me January 1, 2016
I hate it I hate it i didn’t wanted to give it a star i recommend you to not to download it.

Lyndz Higgins October 25, 2015
I can’t go on to anything afterclipping the eyebrows it’s not fun fix and I will give 5 ☆

Ashlea Rakels January 14, 2016
Its was fun until I clipped the eyebrows and then I couldn’t continue so please fix I really l enjoy it so please fix and I will give 5 ⭐

unicorn girl November 14, 2015
It wont let me do anthing after doing the eyebrows

Dakoda Stares March 4, 2016
I think it is a waste of time cause i could not get to the second round after i had washed her face. Fix it plzzzz

Mr Goon November 14, 2015
Wouldn’t let me move on to do her hair all I could was the stupid spa

Rianna Kabir November 27, 2015
OK. I was so excited to play this game! But the button after doing the facial dosent work!!!??

Tifani Sartain December 6, 2015
I can do nothing on it after brushing her hair

Vidhi Gurnani February 23, 2016
When I started to play the game in first play only it hanged.

Karlie Stepke November 3, 2015
You cant do anything after doing the eyebrows

Courtney Holding October 27, 2015
It’s not letting me click the next button

Isabella Apodaca November 26, 2015
I can not do any things afterdone after I’m done clipping her eyebrows

Christina Rasmussen May 1, 2016
You are right the buttons don’t work it’s so stupid.

DEEPTI MULLICK October 10, 2015
It is the worst game that I have played please don’t download it

Poppy Scurfield November 13, 2015
Only one word to describe it you must download this game LOVE

Ines Asma Djouama November 2, 2015
I havent tryed it but I know that it will be amazing msyby

Georgia Townley October 4, 2015
The buttons don’t do their job

Courtney Cadman September 26, 2015
Because it would let me complete the second part

Ilma Altumbabic October 17, 2015
This game is Brocken how to go eyebrows

Zoe Petrich October 7, 2015
Wouldn’t let me do the second portion

Aleeza Isa October 10, 2015
Love the game Make more like this one
Tags
GameiMax