Try not to lose your hat as you embark on a blustery evening constitutional! 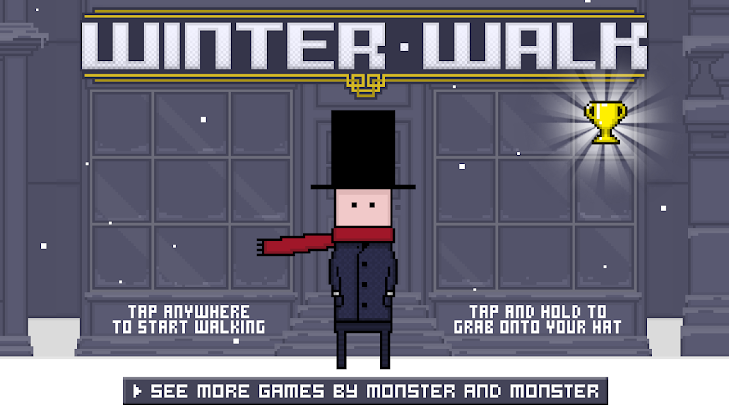 It’s a blustery winter’s day so grab your finest coat and try not to lose your hat as you stroll and ponder. Remember that despite the days getting shorter and the nights lasting longer a Victorian gentleman should always pursue his evening constitutional to keep his mind fresh and his limbs nimble!

Winter Walk is a simple quirky game suitable for ladies and gentlemen of all ages and occupations. Developed by Monster and Monster as a little winter treat for all you wonderful people.

– Tap anywhere on the screen to start walking ?
– Whilst walking tap and hold the screen to grab onto your hat ?
– See how far you can stroll without losing your (very fashionable) top hat ?

– Keep an eye on your top hat! If it wobbles you should probably hold on tight! ❄️

Winter Walk is FIVE years old! To celebrate we’ve written an assortment of NEW musings for our Victorian gentleman to mull over this fine festive season. We hope you enjoy them

Janith Ruberu April 17, 2016
Saw an original idea after a long time. The gentleman’s internal monologue makes it very interesting. Not to mention the achievements. Nice little game that will leave you feeling satisfied.

M Larsen November 20, 2015
Keep the man’s hat on while he chats about the weather. Pretty fun for moments when you need a little kawai to cheer up your day. Same gameplay as Autumn Walk, though that’s a bit cuter for the dog.

Andrew Stage July 2, 2015
What a turbulent adventure!Like a strong refreshing breeze!A gale of a good time!Lots of wind!

James George January 18, 2015
The only thing you do is grab his hat when it wiggles. Not a recipe for wild times.

Zenks ren January 28, 2016
The dialogue’s funny to read for a bit but this is probably one of the most boring videogames ever created. I’d rather play a f***in paint-drying simulator

Adrian Colley November 14, 2015
Very simple, very charming, very addictive. You have to try it just for the urchins who retrieve your hat and expect a reward.

Red Shift March 20, 2015
Simple game has a certain zany charm to it. Like nothing I have played in 25 years of gaming.

Andrew Diebolt September 1, 2015
Uhhhhhhhhh….. Not sure what I was expecting. Kinda felt like an un-game, certainly can’t say it was a fun game.

Laloo Ganesan August 8, 2015
This game is addictive as hell! The prospect of being exposed to the characters musings for as long as possible is enough inspiration to be glued to this title

maqbool ur rahim khan January 31, 2015
Its a very relaxing game but it think there can something’s more engaging BT after all I like it

Carol McCann January 6, 2015
Quirky and funny. He cheers me up with his comical chat.

Stephen Taul January 13, 2016
Evening constitutional with idle musings of every intrigue a young Victorian could ponce!

Jessica Fleischer August 24, 2015
Winter Walk is the best game ever made.

Craig Pirrall February 15, 2014
This is a fun, charming, slowly paced little game that is perfect for train rides. The music, I wish I could turn off. It is appropriate, but after a while it’s a little grating. I’d rather hear the blustering winter breeze or the trudging of the gentleman’s footsteps in the snow.

Bjorn Worpel May 17, 2013
Everything about this game could be called inane and trivial – the mechanics, centred around holding on to your hat, are so basic you can barely even call this a game, and the inner monologue about the mundane events in the main character’s life is utterly frivolous and inconsequential. But somehow it works – I could play this for hours. Love this game!

Martin Bassnett December 20, 2013
I’ve managed a score of 6881… I left it on pause on my nexus 4 and when I can back to it the next day my score was huge and all achievements unlocked.

Amy Schrag August 21, 2013
A simple, surprisingly entertaining game. The main goal of keeping the hat on the gentleman’s head is simple enough, sometimes more challenging than you would expect. The monolog is the best part though, very whimsical – and very much what I would expect a Victorian gentleman to ponder on while taking his evening stroll.

William Dommett June 22, 2013
The pixel art is not only fantastical, but alot harder to endeveor than it appears.The mindless conversation is utmost elegant and well put.If only you made more games, im sure they would be equally spiffin.

Amani Rozahani December 24, 2012
I find this game is adorable and I love the way Mr.fancy hat retaliations upon the weather and certain things revolving around his life. It’s cute.

Coach Dan August 1, 2014
The game is verry fun however the game gets boring after 5 minutes of playing because there is no change of scenery, nor experience

Eric David Haddad December 18, 2014
I like to play this game in the evening when I’m winding down from the day and just want to relax and take a nice walk through wintery streets while musing to myself… it’s oddly challenging but equally rewarding.
Tags
Monster and Monster