This is a solid game, but I cant seem to find a good use for all my coins. I was thinking that you could add an update that would let us purchase equipment, faries, battle pets and avatars with coins. Other than that, super solid game. 10/5 stars. 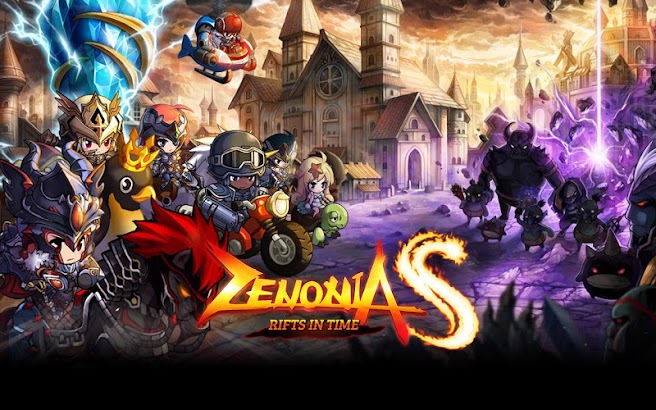 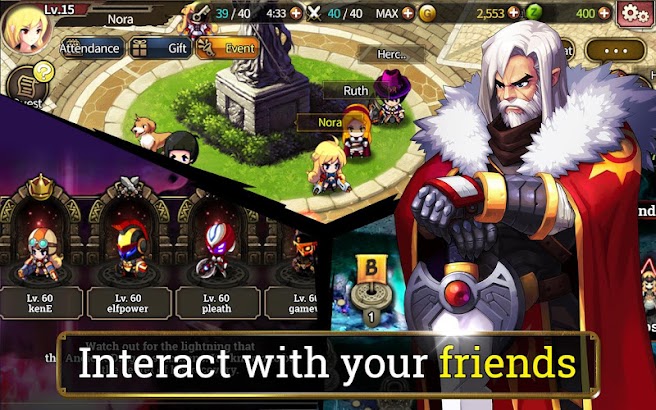 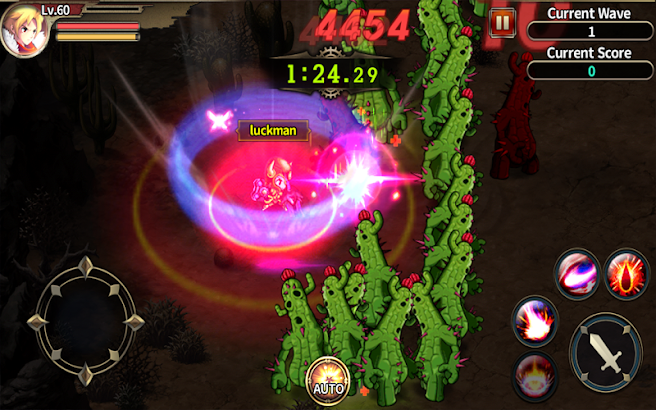 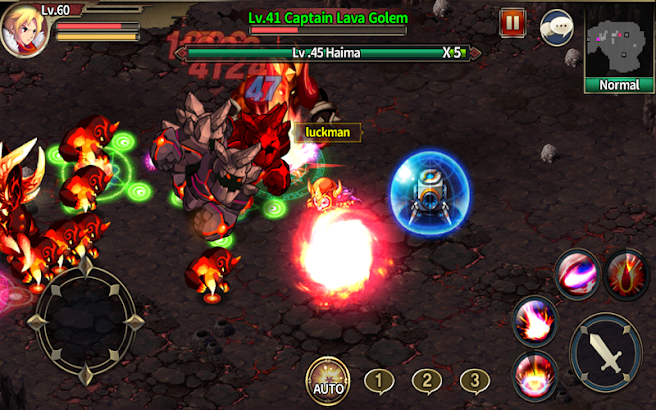 The world’s most popular mobile RPG, ZENONIA®, is now online! !

Travel across nine treacherous realms to uncover the mystery behind the portal.
Assist the Celestial Kingdom and expose the horrifying truth.

Chat and play with your friends in real-time! Join a co-op raid party and fend off vicious monsters in Raid mode. Enter PVP matchups to destroy your competition.

[Real-time Action]Battle monsters, make friends, and punish challengers all from your mobile device.
Explore the world of ZENONIA S: Rifts in Time across the nine realms.
Test your survival skills in the Monster Wave mode. [Classes]Choose from your favorite ZENONIA® characters.
Slasher/ Ranger/ Fighter / Magician / Assassin
Awaken your hero and break the limit. [Customize]Customize you character with over 300 different pieces of equipment.
Increase the effectiveness of your weapons, armor, and accessories through various enhancements

Put your skills to the test in ZENONIA S: Rifts in Time. Become legendary!

** This game is available in English.
** There may be additional costs when trying to obtain certain items.
** Requires Android 7.0 or earlier version

FrozenCorpse 490 June 4, 2017
This is a solid game, but I cant seem to find a good use for all my coins. I was thinking that you could add an update that would let us purchase equipment, faries, battle pets and avatars with coins. Other than that, super solid game. 10/5 stars.

Arelle Leeds August 30, 2017
Can u fix this there is a illegal program has been detected by XIGNCODE3ERROR(E0191019).Come on developer plss fix thisi cant play this game and it will force close becuse of the illegal program

Lucky Hartanto.S June 12, 2017
I like this game, but i got bug for some reason. everytime i tried to play with my mobile data it keep saying “you disconnected from the server error 52” so i have to play with my wifi everytime. please fix it. and also about the gameplay, i think it’s too hard to level up. like i’m on level 19. and it’s taking time to level up to 20. i think you should reduce the exp amount that needed to level up. Btw, Thank you, i appreciate thia game. this game is addicting. hope you reply it Gamevil. ? like give me solution or something. Thank you once again.

Absolute Zero April 28, 2017
The game itself was fun, but it was way too laggy for me. I think maybe if there was an option to toggle graphics or decrease the number of people that we can see on the courtyard would make it better

strawberry cream September 24, 2017
PLEASE UPDATE! I’VE WAITED MANY MONTHS FOR A UPDATE BUT NOTHING IS HAPPENING!! Many of my friends now quit the game because its boring now. Please Update immediately. Please.

UnknownMay 22, 2017
Absolutely Trash.. I downloaded the whole app data that game needed then after the applying stage it keeps crashing sorry for my bad english but this game just waste my time.

Jenson Clyde Collarte August 31, 2017
GAME KEEPS CRASHING: please fix this if u can:I downloaded this game and tought it was a good game but after the patch and all the add-ons , it just crashes.Please spend some time reading thisThank you

kris DElaCruz July 4, 2017
gamevil guys !! i need HELP i really want to play this game but im stuck at the tutorial equiping the item given to me !! i love zenonia I finished zenonia 3 4 and 5 and i want to try all my fav. characters . please help how can i contact you if im stuck at the conversation i cant send my personal account in the game so please e mail me in this account .. Thanks Gamevil .. please HELP !! I have a screen shot here so just contact me and i give it you ! please HELP !! ADDICT PLAYER OF ZENONIA HERE !!

Toraylin Archibald September 15, 2017
I love This Game. Ive played a lot of games on mobile. The Earlier games, like 4 and 5. You can play offline. That says something. Anyways see U in th€re¥

XiaoPaoMode August 12, 2017
It kept saying error you have been disconnected from server. i have 20 mbit wifi and all other games run fine. i really like zenonia i want to know why i cant play this one. please help gamevil. im from the philippines. snapdragon 615 3gb ram if this helps

Damian Soto May 22, 2017
HORRIBLE!! I’m getting a XINGCOD3 HACK ERROR, the thing is my Nexus 6P has never been rooted, the only and even got factory reset yesterday, the only thing that I could think is that it has something to do with me being a beta tester for Android O

SLIGHTNINGS June 13, 2017
It’s really addictive and by far the best retro game I’ve played. Would recommend a new class called “Blader”, a class that uses dual wielding weapons just like the one in Zenonia 4.

Jan Kenneth Palanog June 22, 2017
Hello, I really love your game but ive seen an issue where my game crashes after a pop up ad appeared on the log-in screen.. I cant get an access to the game since then.. Please fix it thank you..

Bobby John Ford July 17, 2017
There is NO reason your game needs access to make and manage calls or my pictures on my phone. Gar
bage.

Tooji Gotez May 28, 2017
Its ….bad. I cant find any way to join a guild at all. No instructions, no nothing. I tried to give this the benefit of the doubt, but it ultimately is bad cause i cant get game rewards for playing for 1 hr cause the pop up keeps crashing. Along with the extra zen page for playing other games. Im disappointed in you gamevil. Shame on you.

Yosef Abacan June 9, 2017
You just consumed my data. After downloading tons of files theit will just crash and won’t even let me play! Your game is garbage. You don’t even deserve to get 1 star!

Booze Clown September 24, 2017
It’s a great game and I’m going to continue to play. Seems like grinding for lvls could end up taking a while but that is the standard in the genre

junell judilla August 21, 2017
Pls fix the crashes. After i enter the game it keep crashing. I like to play the game. And more options to make it stable.

Mark Anthony Perez May 18, 2017
Hello gamevil. I was wondering why does my friend has free full item set an why i dont have.please help.. i gave 5star coz i like it. But the freebies is not equal.. thank you for your consideration.

Cory Cooper June 18, 2017
So to go for my 2ND arena match and have someone 5 levels ahead of me hit for the millions while I fought someone who was almost twice my level and almost won? This game is absolute garbage if that’s compared as equal.

Rojane Calopez September 24, 2017
Your new update wont let me play on my Asus Zenfone Laser 2…and it keeps notifying me that it’s not working and the app auto closes…what’s wrong? ?

Rev_Anonymous Subscribe June 10, 2017
Every time I try to login it says “Illegal program has been detected by XIGNCODE3 Error (E0191019) please fix it. I love this game

Baron Vigonte April 27, 2017
Great game but it won’t load after I updated the app to 3.5.1 on my device and it freezes and then when I close it it still keeps on playing the intro song. Please fix it because its a very good game

Jesse McKowen June 27, 2017
I miss the first 2 games. I am not a fan of this mobile free to play games. I’d rather have it be a big world to explore then what this game offers. Mobile games don’t need to be handicapped just because they are mobile. I used to play hours on the first two games. Uninstalled this one really quick when I realized it wasn’t a full action RPG game like the first two were.

Alec Tenepere May 19, 2017
Hive Initialized Failed. Suddenly it became like this. What’s the solution!? Ill give 5 stars after fix.

Renz Gagarin June 12, 2017
Hey. I just finished the data download. When the additional data download crashes, the data downloaded reverts back to zero AGAIN. I’ve wasted A LOT OF TIME AND DATA IN THIS GAME!!! What the hell was going on ?!!

Romdani Ahmad June 22, 2017
I know zenonia was very good game. But this was so anoying.. absolutely trash Cant even play after downloqd and update

yung cabege October 21, 2017
Its awesome but i have a REALLY BIG problem were i cant open the “item” thing at the bottom. Every time i try it send me back to my home screen, and sometimes it wont even let me enter the town.other than that this is a great game. ?

Charlene Joy Delos Reyes April 28, 2017
The new updates!! What’s the purpose of that? After the update the game always crash (force to stop) . Pls. Fix

rikiponcho October 17, 2017
It crashes everytime I “enter town”, please fix this… I need my daily reward…

Eara Hanazaki August 12, 2017
Hello developers i just want a small request can you make a Guild to Guild PvP? Well i know its not really a small request because it needs realtime pvp but it would be awesome if this game ha
d that feature and im pretty sure this game will be downloaded by more people thanks!

Arthur Cadiogan May 26, 2017
Downloaded the game and it’s not even working. Tried all the troubleshooting steps still nothing happened. So disappointed

Peter Vargas June 12, 2017
It gets boring after a day or 2 cause theres not much to do since your always running out of gold

Ian Cap May 14, 2017
Hey gamevil please fix the crashing problem this game is the finest mmorpg i have played. Make the zenonia franchise great again!!

Rod Casipong June 5, 2017
I have one concern , why is the customer support is not responsive. I’m thinking thatyou are just ignoring our concerns.

Shea Tan September 28, 2017
I loved this game on my old phone and I was super pro so I downloaded it on my new phone and it keeps crashing when they say applying dataPLEASE ZENONIA UR ZENONIA 2 3 AND 4 WAS MY CHILDHOOD PLEASE FIX THIS

Karrina Suryana July 13, 2017
It’s very addictive.. But I had a bug on the seal. I can’t enhance it meanwhile i have all the materials.
Tags
GAMEVIL