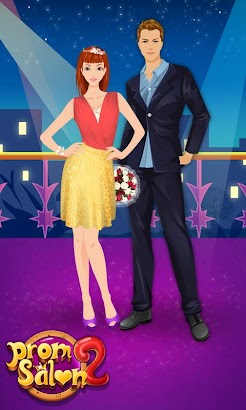 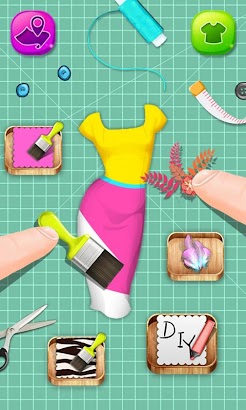 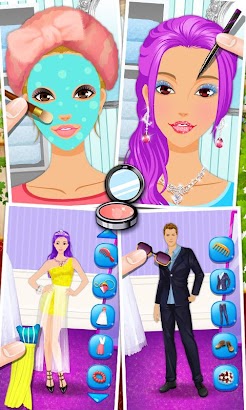 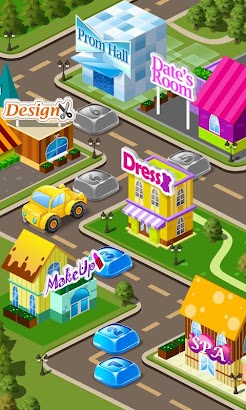 Romance is in the air! Prom is right around the corner and you’ve got to be prepared to make a splash that night! The whole school will be there, so it’s time to show your date and your classmates how bright you can shine.

In Prom Salon 2, head straight to the spa to get ready. Treat yourself to a relaxing mask and cleansing before deciding on the perfect makeup and hairstyle. Will you wear your hair up or down? Will it be straight or in curls? You can even design your own unique dress for the big night! The beauty salon has everything you need to make your night perfect!

Product Features:
– School prom themed beauty salon game.
– Spa feature to clean up and make your skin shine.
– Tons of pretty makeups to choose from.
– Cute hairstyles for any taste.
– Design your own unique prom dress for the big night.
– Pick out your handsome date to take!
– Take a photo at the end of the night to remember this romantic dance!

How to Play:
– Use interactive controls to play.
– Visit the spa to clean up, do makeup, and fix your hair.
– Choose and design a gorgeous dress!
– Grab your date and head to the prom.
– Take a picture of yourself and your date.

Wanna have more fun? Having problems or suggestions? We would love to hear from you!

You can find us on Facebook at https://www.facebook.com/BearHugMediaPrincessGames
Or on Twitter at https://twitter.com/bear_hug_media
For more information about Bear Hug Media, please visit http://www.bearhugmedia.com
For more information about Prom Salon 2, please visit http://www.bearhugmedia.com/prom-salon-2

Caitlyn Needham August 21, 2016
This app is terrible don’t get it anyone it’s a waste of time everything is too sparkly for example of the lips and the blush and you don’t get good selections either

Family Bach January 31, 2016
No. One waz horrible. Now two?! I can’t believe it stops every time i play! It makes me start over again and again. Every time I play. Do not use this app! I really did despise it. Read my prom salon 1 review plz peeps!

Victoria Hamlet December 6, 2015
I would rate it a five star but I couldn’t pass the first level,spa. Please help…Someone give me advice. Thanks…

Memory Sneed December 24, 2015
Could be better but I liked the

Koty Perkins November 25, 2015
It wont even let me play the first level. It freezes and goes back to my home screen

Kalsoom Waheed October 5, 2015
Even when I look at it it attracts me to play it .theirs nothing better than prom salon 2.:):):).Cool

Elroy Cacho September 12, 2015
I think that the person who brought this game out is someone who loves girl games

Charlene Marais September 1, 2015
Wish I had it n my room cool

diffany manuel November 15, 2015
I love it so much like OMG Idieing

Helena Hazells February 5, 2016
I love it its so good I am on the last level

Tajpalkourgill Gill November 27, 2015
But have to add new craters

Destiny Aguirre December 26, 2015
This game was a good time and it was fun

americus coram January 9, 2016
I love it because it’s awsome

Ashlie Richardson November 7, 2015
I love this game so much